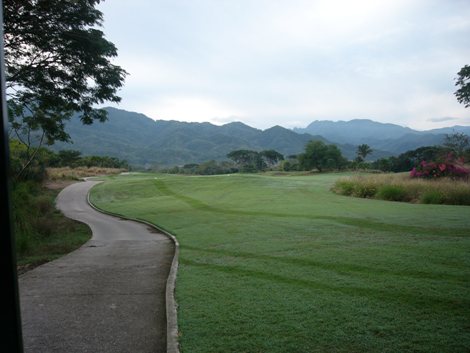 Looking down the 1st fairway on the Weiskopf course at Vista Vallarta
I’m in the penultimate day of my all-male golf outing. We’ll be up at the crack of dawn tomorrow, play 18, dash back to the hotel, throw all my crap in the suitcase (where is MD, my packer extraordinairre when I need her?), head to the airport and be back in the late afternoon. When I do get back, I’ll deal with all the comments that have stacked up in my while I’ve been gone. I’ll have them posted with my pithy commentary by noon Monday at the latest. So, if you’ve been waiting and watching, don’t despair.
In roaming through the news today I learned that Medicaid in West Virginia is going to try a different approach to solve the huge obesity problem that afflicts that state. Since the state spends about $140 million per year in health care costs for its heftiest citizens, the powers that be figure that spending a few million on preventative treatment might be a good investment. Problem is, in my opinion, they’re going about it in the wrong way.

Facing more than $100 million in annual costs linked to obesity, the Medicaid program in one of the country’s most overweight states is turning to a familiar name to help residents slim down.
Up to 75,000 West Virginians will soon be eligible for free weight loss courses through Weight Watchers, thanks to an effort by the state Medicaid program and the health benefits group UniCare, the largest provider of Medicaid coverage in the state.

Weight Watchers??!!??
So let me get this straight. We’ve got an enormous number of overweight people, most of whom spend their time face down in the carbohydrates. And we’re going to put them on a low-fat, high-carbohydrate diet–at state expense–to help them lose the weight they’ve put on by eating too many carbohydrates. Have I got that right?
Brilliant!