While reading a scientific paper on the benefits of a carnivorous diet I noticed a paper in the list of references at the end that I had never seen cited. I tracked the paper down, read it, and learned that vegetarians have significantly higher rates of advanced glycation end products (AGE) than do omnivores.
Before we get into the study, let’s take a moment and discuss AGEs so we’ll all be on the same page. When proteins are incubated with sugars, over time the sugar attaches irreversibly with the protein in a process called glycation. (There are many names for the reaction: the Maillard reaction, Schiff’s base formation, the Amadori reaction, etc. with minor differences between these different processes, but debating the differences is pointless for our purposes.) If the protein performs a specific function in the body due to its unique structural conformation, and it finds itself with a sugar attached to it that it can’t get rid of, then this protein suddenly doesn’t function so well and becomes a junk protein that the body has to dispose of.
Since most of the structures in our bodies are made of protein, and since all of these proteins are bathed in blood that contains glucose, the normal course of events is for a portion of these proteins to undergo glycation. And the longer the proteins are in contact with the sugar, the more glycated proteins will be formed. All this goes on continuously in our bodies so as we age we accumulate more and more of these substances, thus the clever name AGEs.
If we set out two beakers filled with a protein solution and add an amount of sugar to one and double that amount of sugar to the other, we will end up with many more glycated proteins in the beaker with more sugar. The same thing happens in the body. If blood sugar is chronically high, then there are more glycation products. One of these products – hemoglobin A1c – is used to measure the average blood sugar concentration over the previous couple of months.
Hemoglobin is the protein in the red blood cells that binds to and transports oxygen throughout the body. There is always sugar in the blood, some of which binds to the hemoglobin via the glycation process. If the blood sugar goes up and stays up as it does in diabetes the elevated concentrations of glucose end up producing more glycated hemoglobin, called hemoglobin A1c. (Fructose is a much more potent glycating agent (it’s actually called a fructating agent) than is glucose (blood sugar), so the inclusion of high-fructose corn syrup into almost everything isn’t doing us a lot of good glycation-wise.) And hemoglobin isn’t the only protein being glycated – it’s just the one that’s commonly measured.
More glycated proteins are not a good thing. We all want our proteins to work as nature intended and not be gummed up by having a sugar hanging off of them. These glycated proteins end up in the lysosomes, the refuse boxes of the cells, and are thought to be one of the driving forces behind the aging process. Cells with too much junk don’t function properly. And when enough of our cells don’t function properly, we don’t function properly. (Click here to read an old post about de-junking your cells)
With that background in mind, let’s take a look at the paper.
Researchers looked at a group of 19 vegetarians (lacto-ovovegetarians) and used as a comparison a group of 19 omnivorous subjects recruited from the same region (Bratislava, Slovak Republic). As you can see from the table below, the omnivores (Traditional) actually consumed a little more carb (saccharides) each day than did the vegetarians (Alternative), but not enough to reach significance. What the vegetarians ate more of in significant amounts were fruits and vegetables, giving them a significantly increased intake of fructose. 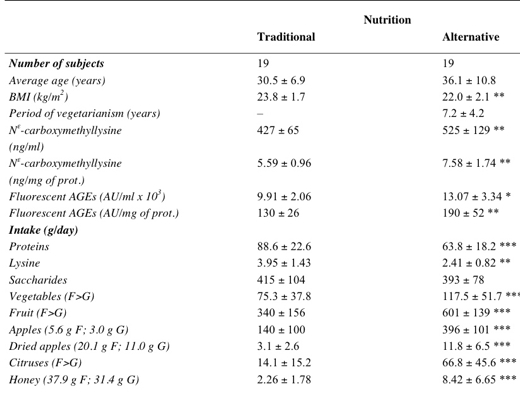 When researchers measured levels of carboxymethyllysine, an glycation product that represents

a general marker of oxidative stress and long-term damage of proteins in aging, atherosclerosis and diabetes

it was found to be significantly elevated in vegetarians as compared to omnivores. Fluorescent AGEs are basically a direct measurement of AGEs in the blood. As the authors point out fluorescent AGEs serve

as an index of advanced glycation [and] increase linearly for human serum albumin [a blood protein] incubated with glucose and exponentially when fructose [is] added to the incubation medium.

Fluorescent AGEs were also significantly higher in the vegetarians.
Another interesting aspect of this study is the finding of the authors that the vegetarians

I find this intriguing because so many anti-meat zealots constantly harp about the dangers of overcooking meat (or cooking it on a grill) because of the AGEs that are produced in the process, which, they seem to believe end up in the bodies of those who eat grilled or overcooked meat. I don’t think it’s too much to assume that most of the omnivores eat meat, and some probably overcook it or grill it, yet they have less accumulation of AGES than the oh so fastidious vegetarians.
I’m sure I’ll get a slew of comments from surly vegetarians after this post telling me how healthy they are and how healthful the vegetarian diet is. But in this case the data show otherwise.