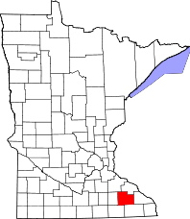 Olmsted County, MN
A recent paper in the Archives of Internal Medicine should give pause to those dispensing statins like candy. According to some fairly persuasive autopsy data, it appears that the rate of heart disease may be back on the rise after being in a slow decline over the past 40 years.
In Olmsted County, Minnesota, home of the Mayo Clinic, autopsies are much more common than in other parts of the country. So much so that the autopsy records of this county are often used in scientific inquiry as a surrogate for the country as a whole. Autopsies used to be more common nationwide but had fallen in 2003 to only 8.3 percent of deaths. Autopsies are conducted in Olmsted County at rates an order of magnitude greater than they are throughout the rest of the country.
Autopsy studies are terrific for gathering data because you don’t have to guess what disease someone had, you can actually see it. But, great as autopsy studies are for gathering data on a given person, they can be less than stellar when looking at the larger picture. Since autopsies are done on people who have died and were presumably not in very good health right before they died, it’s often difficult to extrapolate the findings to the living, breathing, more healthy population. The researchers at Omsted County got around this problem.
From 1981 through 2004 3,237 people in Olmsted County aged 16-64 years died of all causes. Of these, 515 died of ‘unnatural’ causes, defined as suicide, accidental, homicide or a manner that could not be determined. Of these 515, 493 (96%) were autopsied. The fact that these subjects died of unnatural causes is what gives the data its validity. Were these patients who died in the hospital after lengthy illnesses, it would be hard to apply the findings to citizens at large. The subjects of this study, however, died not of illness but of some other more violent cause. Assuming they were representative of the rest of the ‘healthy’ people walking around, what their coronary arteries showed would be of interest. Of these 493 subjects who died of unnatural causes, 82 had their coronary arteries graded during autopsy. (Coronary anatomy grading is an analysis based on degree of coronary artery plaque adjusted for age and sex that basically describes the severity of atherosclerosis in the coronary arteries.)
From the start of the study in 1981 until 1997 the autopsy data showed a slow decline in the number of people with evidence of coronary artery disease and in the number of people with high-grade (bad) coronary artery disease. The autopsy data pretty much mirrored the national data showing a slow, steady decline. Then right after 1997 things changed.
From 1997 through 2004 there was a steady increase in the number of people with signs of coronary disease. Beginning in 2001 the number of people with high-grade disease began increasing. You can see this graphically in the chart below. 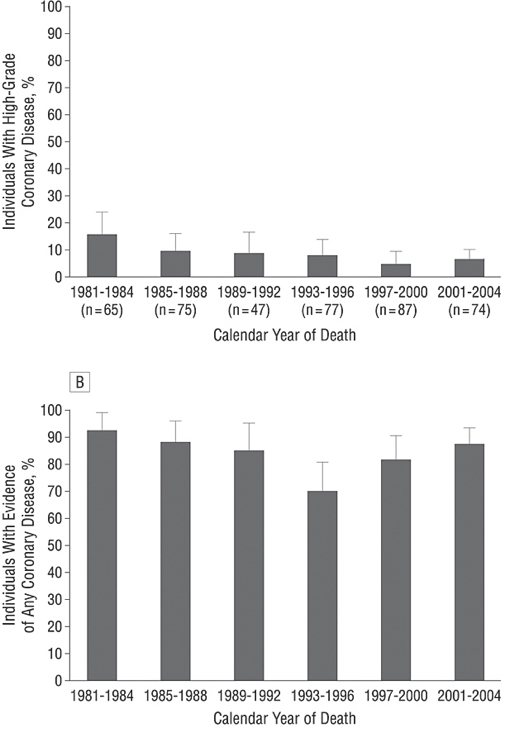 The authors of the study conclude that

Declines in the prevalence of CAD at autopsy over the 1981-2004 period taken as a whole reinforce the argument that 4 decades of declines in heart disease mortality largely reflect reductions in disease incidence (ie, reductions in CAD incidence more than offset any rise in prevalence from improved survival among persons with CAD). Our finding that temporal declines in the grade of CAD at autopsy have ended, together with suggestive evidence that declines have recently reversed, provides some of the first data to support increasing concerns that declines in heart disease mortality may not continue.

What do they think is causing this increase?

The extent to which recent trends are attributable to the epidemics of obesity and diabetes mellitus awaits further investigation.

If you look at the graph below you can see that deaths from heart disease peaked in about 1950 and leveled off for a few years until around 1968 when they started a much steeper decline. In 1966 the surgeon general issued the famous warning that is still on all cigarette packages. Even before that drastic step was taken there was much in the news about the dangers of smoking and people began to quit. Most experts consider the decline in incidence of heart disease (which mirrors the graph below but lags behind it) as a consequence of the fall off in the number of people who smoke.

Now let’s look at all this data and put on our thinking caps. We know – everyone knows – that smoking is a major risk factor for heart disease. We know that smoking is on the decline and so has been heart disease, which makes sense. We also know that doctors every where have been prescribing statin drugs like crazy to anyone with even a tiny elevation of serum cholesterol levels. The paper tells us that virtually all the people in Olmsted County – including the ones who died of unnatural causes – are patients of the Mayo Clinic. The Mayo Clinic is a hotbed of statinators.
So, we can reasonably conclude that many of these people dying unnatural deaths were probably on statin drugs. (The average age of the subjects was 36 years with a standard deviation of 14 years, meaning that plenty were middle aged and ripe for statin prescriptions.) And the reversal in the many-year-long decline in heart disease occurred just about the time that the statinators really got going.
What we can tell from our calculating is that people are smoking less, taking statins and developing more heart disease. I’m not saying that the statins are necessarily causing heart disease, but I certainly don’t think they’re doing a whole lot to prevent it either. And since we know that statin drugs consume a huge portion of national medical bill, why do we continue to take them by the handful?
The authors of this study sort of backhandedly blame the increase on the increasing rates of both diabetes and obesity. But most people who are diabetic and obese are middle aged, and what statinator worth his/her salt wouldn’t have one of these patients on a statin? It would seem to me that if statins have even a fraction of the power to prevent heart disease that most statinators believe they do, these figures showing the extent of coronary disease would still be going down and not up. It certainly makes one wonder.