Tips & tricks for starting (or restarting) low-carb Pt I 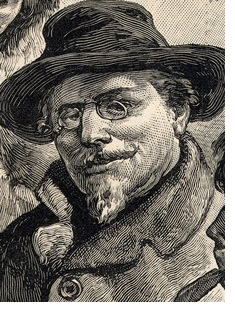 As anyone who has done it knows, getting started on a low-carb diet can be a little rough.  Not for everyone, but for some.  All too often these little front-end bumps in the road–coupled with the spirit of the times in which the well-intentioned but ignorant friends and relatives of low-carb dieters tell them their diet is going to croak their kidneys, clog their arteries and weaken their bones–can be enough to make many people abandon the most sincere efforts.  Drawing on my almost 30 years of experience treating patients using the low-carb diet, I can give some tips and tricks for dealing with these difficult early days.

Listen to your body?

Probably the best explanation of low-carb adaptation (also called keto adaptation) was written by a Lt. Frederick Schwatka (pictured above left) over a hundred years ago.

When first thrown wholly upon a diet of reindeer meat, it seems inadequate to properly nourish the system and there is an apparent weakness and inability to perform severe exertive, fatiguing journeys. But this soon passes away in the course of two or three weeks.

Lt. Schwatka was a doctor, a lawyer, and an explorer of the Arctic, the Great Plains and northern Mexico.  The above quote comes from his book on the unfruitful search for the Franklin party in 1878.  (For all his experience and gifts, and understanding of low-carb adaptation, the good doctor listened to his own body a little too much and did himself in with an overdose of morphine at age 42.) You can read more about Lt Schwatka, low-carb adaptation, and his time with the Inuit in a post I wrote a few years ago.
The period of low-carb adaptation is that time between starting a low-carb diet and feeling great on a low-carb diet.  It can take anywhere from just a day or so to two or three weeks.  During this adaptation period people tend to fatigue easily, experience a slight lack of mental clarity and be tormented off and on by the unbidden lust for carbs that seems to rise up out of nowhere.
Why does this happen early on with a diet that ultimately works so well to increase exercise capacity, mental clarity, and feelings of satiation? It happens because both your body and brain are going through a profound change in the way they get their energy.  You can’t run your car designed to burn gasoline on biodeisel…unless you install a converter.  Then you can.  We humans have the design for our carb to fat converters coded in our DNA – the low-carb adaptation period is simply the time it takes for the converter to be built and installed.
Our bodies are simply giant piles of chemicals heaped together in a human-shaped form.  Most of the chemicals will react with one another, but only extremely slowly.  If we didn’t have something to help these reactions along, life wouldn’t exist.  The helpers are called enzymes.
These enzymes – which are large folded proteins – catalyze all the chemical reactions that allow us to function.  Mix a couple of body chemicals together and you might have to wait twenty years or more for them to interact or combine in some way to form another body chemical product.  Throw the correct enzyme into the mixture, and you get a reaction in a fraction of a second. When you’ve been on the standard American high-carb diet, you’re loaded with enzymes ready to convert those carbs to energy.  You’ve got some enzymes laying in the weeds waiting to deal with the fat, but mainly dealing with it by storing it, not necessarily burning it.  All the pathways to deal with carbs and their resultant blood glucose are well-oiled and operating smoothly.
Then you start a low-carb diet.  Suddenly, you’ve idled most of the enzyme force you have built to process the carbs in your diet while at the same time you don’t have a ready supply of the enzymes in the quantities needed to deal with your new diet.  It would be like a Ford automobile factory changing in one day into a plant that made iPads.  All the autoworkers would show up and be clueless as how to make an iPad.  It would take a while – not to mention a lot of chaos – to get rid of the autoworkers and replace them with iPad workers.  In a way, that’s kind of what’s happening during the low-carb adaptation period. Over the first few days to few weeks of low-carb adaptation, your body is laying off the carbohydrate worker enzymes and building new fat worker enzymes.  Once the workforce in your body is changed out, you start functioning properly on your new low-carb, higher-fat diet.
The carbs you used to burn for energy are now replaced to a great extent by ketones (which is why this time is also called the keto-adaptation period) and fat.  Your brain begins to use ketones to replace the glucose it used to use pretty much exclusively, so your thinking clears up.  And the fatigue you used to feel at the start of the diet goes away as ketones and fat (and the army of enzymes required to use them efficiently) take over as the primary sources of energy.  Suddenly you seem to go from not being able to walk out to get the morning paper without puffing and panting to having an abundance of energy.
Because of this low-carb adaptation period, we never, ever counsel our patients to start an exercise program when they start their low-carb diets because a) we know they’ll be too fatigued to do it, and b) we know that in a short time they will start exercising spontaneously to burn off the excess fat on their bodies once the skids are greased, so to speak. Anyone with good sense contemplating a low-carb diet would ask the question, How can I make this low-carb adaptation period as short as possible?  Good question.  Why would anyone want to prolong the agony? The secret to making it shorter is in the second part of what Lt. Schwatka wrote about low-carb adaptation.  Immediately after the above quoted sentences, he follows with:

At first the white man takes to the new diet in too homeopathic a manner, especially if it be raw. However, seal meat which is far more disagreeable with its fishy odor, and bear meat with its strong flavor, seems to have no such temporary debilitating effect upon the economy.

In other words, the white man, used to flour, sugar, boiled meat and all the other staples of the mid 19th century American diet, balked at the consumption of raw meat, especially raw and malodorous seal and bear meat.  And so took it in tiny portions (in a  “homeopathic manner”) instead of going face down in it.  Compared to reindeer meat, both seal and bear meat are loaded with fat, which is why the consumption of those fattier meats didn’t produce the “temporary debilitating effect.”  In those who did eat the fattier meats, the low-carb adaptation period was very short or even non-existent.

If you want to reduce the time you spend in low-carb adaptation, crank up the fat.  If you go on a high-protein, moderate-fat diet (Schwatka’s reindeer diet), your body will convert the protein to glucose via gluconeogenesis, so you’ll still have glucose to keep the glucose worker enzymes busy and will prolong the conversion to fat and ketones as your primary energy source. So Rule Number One to reduce the time spent in low-carb adaptation purgatory is: Don’t be a wuss when you start your low-carb way of eating.  Keep the carbs cut to the minimum and load up on the fat. Eat fatty cuts of meat, cooked in butter or lard if you want, and force your body over to using the fats and ketones for energy as nature intended.
I mean, don’t try to be noble by eating boneless, skinless chicken breasts – instead insert some pats of butter under the skin of a chicken leg and thigh before cooking, and wolf them with your fingers while the fat drips down your arms.  Do not trim the fat from your steaks – eat them from the fat side in.  If you leave anything on your plate, make sure it’s the meat and not the fat.  If you don’t already, learn to love bacon, and don’t cook it ‘til the fat is all gone: eat it wobbly.  Wallow in Mangalitsa lardo.  And whatever you do, for God’s sake, don’t listen to your body during this adaptation period or you’ll never cross the chasm between fat and miserable on your high-carb diet and slim, happy, energetic and low-carb adapted on the other side.
In my next post, I’ll give you the rest of the tips and tricks to get through low-carb adaptation that MD and I have learned in our combined 50 plus years of taking care of patients on low-carb diet. And I’ll include a recipe worthy of killing for that you can prepare to help you get through.