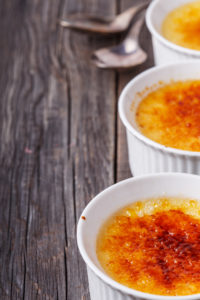 I love custards in almost all their forms. Mike doesn’t particularly, but he eats them when I fix them and enjoys them well enough; they’re just not his ‘go to’ dessert. That would be apple, berry, or cherry something-or-other. He never met a fruit-filled crust he didn’t want to eat, though he eschews doing so most of the time unless I make him the low-carb version, such as the Rustic Apple or Berry Crostada with the Tender Almond Pie Crust from the Low Carb CookwoRx Cookbook.

Thus, since it was my favorite, I was the cook, and love of it is almost universal, I opted for the Low Carb Creme Brulee to finish off our New Year’s Eve 2007 feast. (I have to disclose that this photo is not one from the New Year’s eve dinner. Somehow, probably owing to the many and varied glasses of champagne and wine that preceded it, the photographer (that would be Mike) failed to snap a photo of the dessert. I promise it looked just like this…only smaller.)

Daunting as it may seem if you’ve only ordered it at restaurants and never attempted it yourself, making this dessert is as easy as pie. Actually, it’s a whole lot easier than pie and best of all, it can–actually should–be done the day before and chilled overnight for best results.

Most of what’s in the custard base of a creme brulee is pretty low carb friendly–eggs, vanilla, and cream. But made the traditional way, there’s also a lot of that low-carb demon, pure cane sugar, which has to be replaced. Fortunately, there are replacements that work. My choice in replacing the sugar is to use Splenda, though you could also use erythritol or stevia in an amount sufficient to impart the sweetness of about 18 to 20 teaspoons of sugar. Removing the sugar from the custard base drops the carb count by about 20 grams per serving.

I make a concession to taste and authenticity by using a scant teaspoon of real natural cane sugar or brown sugar to make the caramelized crisp sugar crust that makes a creme brulee something more than just another custard. I have not tried torching erythritol (now widely available commercially) which perhaps would be a worthy endeavor, but I can tell you with great certainty that using a kitchen torch on granular Splenda yields a nasty topping of little charcoal flakes. Bleah! You could try using the new 1/2 and 1/2 Splenda/Sugar blend and it might work, but you’re only saving 2.5 grams of carb more by doing that and might be sacrificing the pure essence of creme brulee. Again, a worthy experiment that I haven’t yet done, but should.

The original recipe for this dessert was the brain child of our Low Carb Comfort Food Cookbook co-author, Ursula Solom, and the recipe appears in that book. We prepared the dessert in an episode of our PBS television show, Low Carb CookwoRx, titled “Romantic Dinner for Two”. It’s simple, quick in hands-on time, and almost never fails. And here’s my adaptation:

1. Preheat oven to 300 degrees; generously butter 4 to 6 shallow ovenproof ramekins and set them in a shallow baking pan.
2. Put all ingredients except egg yolks into a saucepan over medium-low heat, and warm the cream, stirring often. Do not let the cream boil.
3. In a separate bowl (or 4 cup glass measuring cup) beat the eggs yolks until smooth and pale.
4. When the cream is hot and sending up a little steam, temper the eggs with it by dribbling a tablespoon or two of it into the yolks, whisking constantly to prevent the egg yolks from cooking. Repeat the tempering a time or two and then pour in the remainder of the hot cream, whisking constantly.
5. Divide the cream mixture evenly among the buttered ramekins and place into oven. Fill the baking pan with hot water to reach approximately half way up the ramekins.
6. Bake the custard about 30 minutes; it should be pale and shake like jelly when you tap the ramekin.
7. Remove from oven, when cool, cover ramekins, and refrigerate.
8. When ready to serve, remove from refrigerator 10 or 15 minutes ahead and top each custard with 1 teaspoon of brown or granulated sugar. Caramelize the sugar either under the broiler for 1 1⁄2 to 2 minutes or with a kitchen torch to form the crisp brulee crust.

On New Year’s Eve, I made the carb grams go even a little farther, by stretching this volume to 8 servings, made in 2-ounce oval mini-ramekins. This way the basic custard only imparts 2.8 grams of carb to each serving and even with the 4 grams from a teaspoon of real sugar, you’re sitting at just under 7 grams for the dessert. And after a feast such as we had, just a little something sweet is more than enough. Actually most of the time, a little something sweet is just enough.