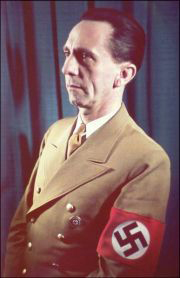 If you tell a lie big enough and keep repeating it, people will eventually come to believe it.*

The history of our race, and each individual’s experience, are sown thick with evidence that a truth is not hard to kill and that a lie told well is immortal.

I’ve always loved the above two quotes because their sentiments are so on the money.  It is sad but true that the bigger the lie, the more people are willing to unquestioningly accept it.  And the greater the mass of people who accept the lie, the easier it is to persuade others to join the growing crowd.  In such a way does a great lie snowball into a great ‘truth.’
Nutritionally I can’t think of a bigger lie than the one claiming that fats in general and saturated fats in particular are bad for us.  This lie is so deeply embedded in the minds of most that you couldn’t blow it out with a stick of dynamite.  Especially in the minds of academics, and more especially in the minds of most dietitians.  Not all, but most. Nutritionally, it is truly the Big Lie.
Despite the fact that they all tenaciously cling to the Big Lie, the evidence disputes it.  But, “a lie told well is immortal.”  Over at Whole Health Source Stephen Guyenet wrote a post recently looking at the observational data about saturated fat and cholesterol levels and heart disease.  Most of the Big Lie devotees worry obsessively about saturated fat intake while the great mass of observational data shows little, if any, correlation.  A couple of years ago, I wrote a long post about the invalidity of observational studies as proof of much anything, but in that post I neglected to mention that although observational studies can’t show that correlation equals causation, they probably are valid in demonstrating the opposite: if there is no correlation, there probably isn’t much of a case for causation.  So, if there isn’t a lot of correlation between saturated fat intake and elevated cholesterol and/or heart disease, is doubtful that saturated fat intake is causal.
I just came across a paper – a research editorial, to be correct – in the Journal of the American Dietetic Association (JADA) that, did I not already have a close and abiding relationship with Jameson, would drive me to drink.  In fact it probably did drive me to drink just a little more.  Now the JADA is the journal edited by and written for Registered Dietitians, and, as a consequence, it has an RD feel to it in terms of content.  It usually hews to the low-fat, high-carb party line, but every now and then it publishes a paper on some facet of low-carbohydrate dieting.  The particular article that caused my heartburn is titled Low-Glycemic Load Diets: How Does the Evidence for Prevention of Disease Measure Up?
This article annoys me on many levels, the first of which is that it even talks about glycemic index (GI) and glycemic load (GL).  I’ve written previously about why I don’t believe the glycemic index to be a particularly valid way of characterizing carbohydrates. And I don’t think the glycemic load concept is much better.  What’s wrong with simply counting carbohydrates?  It provides more benefits and doesn’t encourage the consumption of fructose, a harmful sugar with a low glycemic index.  The reason the glycemic index and glycemic load have been so embraced by the academic community is because they simply can’t bring themselves to admit that the low-carb diet is a superior diet for weight loss, lipid control, blood pressure lowering, blood sugar stabilization, GERD ridding, etc. than is their beloved low-fat diet.  So instead of manning up and admitting that they had been wrong for the past 40 years, they tart the venerable low-carb diet up in academic sounding garb and call it the glycemic load diet and hope no one notices the subterfuge.
It’s perfectly acceptable to talk about low glycemic load diets bringing about health benefits without anyone saying, Whoa, you’ll croak your kidneys. Or, Whoa, you may lose weight, but you’ll clog your arteries.  No, the low glycemic load diet is perfectly innocuous in any company.  No pompous academic will give you grief if you simply use the word ‘glycemic.‘  Try using the term ‘low-carb’ in the halls of Academe, however, and you may be in for some withering stares.
The author of the ‘research editorial‘ drones on about a handful of studies that have looked at the efficacy of low-glycemic-load diets in preventing the development of type II diabetes and other metabolic conditions in healthy subjects.  All of the studies discussed have various problems: not large enough, not long enough, less than optimal dietary questionnaires, etc.  Given the watery results of the studies describe, the article then ends on a bizarre note.

Despite the limitations of the available studies, there is increasing evidence that low-glycemic-load diets could prevent diabetes, cardiovascular disease, and some cancers, including endometrial cancer and esophageal adenocarcinoma.

Say what?
Yep, each of these statements is backed up by a citation or two.  It would seem to me that the ‘research editorial’ would have been much more interesting and meaningful had it focused on the results of these cited studies instead of the ones it did.
Nonetheless, the author soldiers on (and this is the part that really torques me):

In light of these findings, adherence to a low-glycemic-load diet, provided it meets current dietary recommendations including those related to dietary fat content and portion control, seems prudent. [Italics mine]

Ah, the Big Lie rears its fearsome head.  Doesn’t matter how well the diet works or what diseases it might prevent, we don’t want to follow it unless we meet those current recommendations on fat.  No sir.
Do you think the author of this drivel has ever really thought about what food is made of?  It seems unlikely.
Food is made of fat, protein and carbohydrate.  That’s it.  Food also contains water, vitamins, minerals and other nutrients, but only fat, carbohydrate and protein provide calories.  And when a diet is constructed of these things – especially one that toes the line as far as portion control is concerned – trade offs have to be made.
If you keep the calories the same, and you decrease one of the three components, you’re going to have to increase one of the others.  Let’s look at how the brain of a lipophobe would cypher this.  Okay, we need to cut the fat, so that’s the first thing we’ll do.  We’ll cut fat, and we’ll really cut saturated fat.  But now we’ve got to get our calories back up, so we’ll add low-glycemic carbohydrates to do that.  But, uh oh, when we add that many carbs, even though they are low-glycemic-index carbs, we increase the glycemic load.  We can’t really do that if we want to prevent all these diseases.  We’ll increase the protein.  But, wait, we can’t increase it too much or we’ll damage the kidneys. (A myth, of course, but they all believe it.)  And it’s hard to increase the protein without increasing the fat because most good sources of protein contain fat, even, God forbid, saturated fat.  So if we up the protein, we up the fat.  But fat is the devil in disguise, oh yes it is; it’s the devil in disguise.  Can’t go there.
See what I mean.  If you are a lipophobe, there is no solution. It could be called the Lipophobe’s Conundrum.  And that’s why I’m glad I‘m not a lipophobe, so I don’t have to worry about it. I haven’t bought into the Big Lie.  All I need to do is cut the carbs and let everything else take care of itself.
*Below is the Goebbel’s quote in full.  Interesting to note that Dr. Joe’s ideas are still alive and well and in full use by many of our own politicians.
“If you tell a lie big enough and keep repeating it, people will eventually come to believe it. The lie can be maintained only for such time as the State can shield the people from the political, economic and/or military consequences of the lie. It thus becomes vitally important for the State to use all of its powers to repress dissent, for the truth is the mortal enemy of the lie, and thus by extension, the truth is the greatest enemy of the State.”