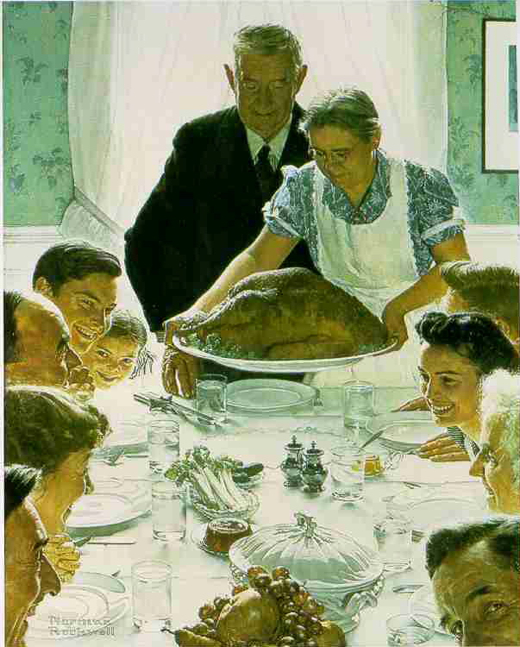 I’m kicked back with a hot cup of tea (a mixture of Irish breakfast tea and lapsang souchong, a mixture recommended to me by my long time golfing buddy Jim Hickman) with the Dallas-Jets game on the TV in the background (I’ve got my money on the Jets +14.5 points. It’s half time right now and the Cowboys are ahead 21-3, but I think the Jets will probably get a cheap touchdown near the end to cover for me.) and MD puttering around in the kitchen putting together Thanksgiving dinner. We’re heading over to our son and DIL’s house for the actual dinner, but MD is fixing her part of it here.
I’ve always loved the above painting by Norman Rockwell. It was done during the WWII years when the outcome was not all that certain. The painting titled Freedom from Want is one of a four part series Rockwell did for the cover of the Saturday Evening Post. I loved staring at paintings as a kid, trying to figure out how the artist worked his/her magic. I had a little art talent and painted and drew myself, so I was always trying to learn something about technique. The thing that always bugged me about this Rockwell painting was the matriarch’s arms. Look at the painting. This elderly lady is manhandling a platter holding what looks to be about a 16-18 lb turkey like it is a piece of cotton candy. As a kid I tried to hold a platter with with a medicine ball on it to see if I could do it so effortlessly. No way. Either this grandmother has been doing Slow Burn for many years or ol’ Norman messed up a little on this one.
In reading about the painting I discovered that the model for the grandmother was Mrs. Thaddeus Wheaton, the Rockwell family cook, who, I am sure, posed with an empty platter. Rockwell painted what he saw, and what he saw was an elderly woman holding an empty plate, not one struggling with a massive turkey. As I say, this always irritated me because my own artistic tendencies were in the direction of super realism, and I just couldn’t understand how a real artist could make such an obvious mistake. Why I was even thinking about this as a kid instead of the things that normal kids thought about, who knows?
Here is one of my own drawings, so you can see what I mean about my tendencies toward the realistic. 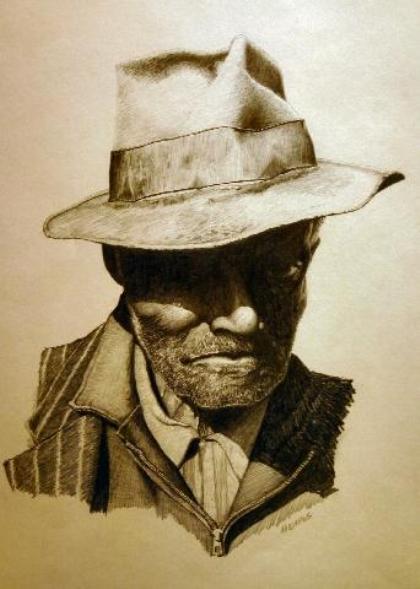 Watch the YouTube video below to see an ad that used to be on TV back in the days when I was wondering about why Rockwell had screwed up his painting.
[youtube]_tZF7H0p_QE[/youtube]
Imagine if this same ad were to run today. The do gooders at the American Heart Association and other such groups would be out with their sharp knives, braying that the dairy industry was promoting the consumption of saturated fat. Now we have commercials for ‘light’ margarine. Yeesh.
As I reflect on the things I have to be thankful for, the following YouTube and accompanying article highlights on of the things I’m not thankful for: an increase in police hostility. When I was growing up, I was told by my parents, grandparents and my teachers that if I were to have a problem I should try to find a policeman to help me. I don’t know anyone who tells their kids that these days. This video shows why.
[youtube]IMaMYL_shxc[/youtube]
The last couple of interactions I’ve had with the police have been less than friendly. A few months ago I was in Santa Barbara heading downtown with MD in our little red convertible. Downtown Santa Barbara has a lot of curbside parking identified by green curbs and signs that say 75 minute parking. There were a couple of open spots directly in front of the store MD and I were going to, so I pulled into one of the spots. A Santa Barbara cop was outside his car a couple of spots ahead of me. As I turned the car off and started to get out, he came toward us and snarled “Get outa there,” and motioned with his hand for us to take off. As I pulled out and drove past him, I noticed that he was putting up signs that said No Parking, which the police often do when a parade or some other event is scheduled. So, why couldn’t the guy have come up to us and told us in friendly terms what was going on instead of being such a swine? More and more people are complaining about the same thing.
Here is an NPR piece on intermittent fasting containing an interview with Mark Mattson, one of the most prolific researchers on IF.
From the YouTube below you can see the difference in the way obesity is looked at today compared to how it was viewed in the 1940s. At the time, I guess, this sort of thing was looked at as an interesting oddity instead of the life-threatening illness it is. (This unfortunate young man died at the age of 32.) Notice the sizes of the parents and the siblings. One assumes that this farm family fed all the kids the same, yet one turned out to be morbidly obese. Same caloric intake – different outcome. For this guy at least the calories weren’t the same as they were for the rest of his family.
[youtube]FLRPbdVbn4o[/youtube]
.
. 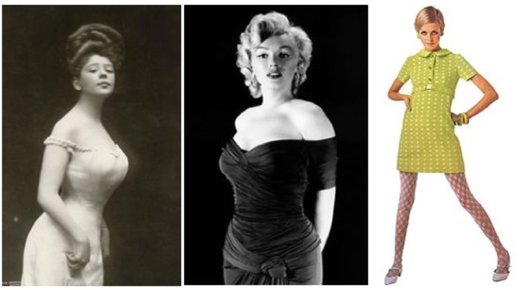 The above photos are from Diet Blog in a piece about how ideal body shapes have changed over the past 100 years.

Today’s ideal body shape seems to be a bizarre combination of male desire and waifish androgyny; thin, no hips, big bust. For most this is only possible with a genetically-blessed bone structure along with surgery – something which America is pursuing with a vengeance. Couple this with the “toned” look, where muscular (but not overly-so) women play lead roles in Hollywood, and champion the fitness industry.How willingly do we subscribe to a cult of perceived beauty that is attainable by so few? Could it be that after all these years, many women are still judged (by themselves and others) on the basis of body shape and little else?
We are a two-body society: one body is an advertising medium, the other body is what you see on the street.

Well, the game just ended, and, unfortunately for me, the Jets failed to come through with any touchdowns, cheap or otherwise. And MD is hounding me to head to the kids’ so I’d better sign off.
I hope you all have a happy and safe Thanksgiving.