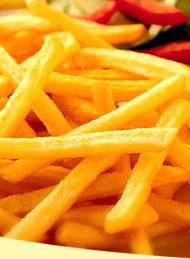 I would rather take a beating than eat fast food. I do know, however, that others enjoy it. I used to enjoy the taste of it myself even though I knew it was terrible for me, but now I’ve read so many bad things about it that I just about can’t bring myself to eat it.
While roaming through the web looking for other data I stumbled upon a blog that contains what I think is an incredibly useful load of info for anyone trying to stay on a diet of any kind and still indulge in fast food. The writer of this blog – a Calorie Counter – has undertaken a prodigious task, at least by my reckoning. He (I’m pretty sure it’s a he) has gone to the time and trouble to wade through all the nutritional information provided by the various purveyors of fast food and tabulated them all for comparison. The hamburgers compared to other hamburgers; the fries to other fries; the chicken sandwiches to other chicken sandwiches. (Click here for the charts)
Says the author:

I’ve compared the nutrition facts of the most popular foods from over 20 popular fast food restaurants to see how each restaurant’s version of the same food stacks up against the others. If this isn’t enough to convince you to eat less (or none) of this stuff, it will at least give you the information you need to make the better choice and avoid making the worst one. Enjoy… 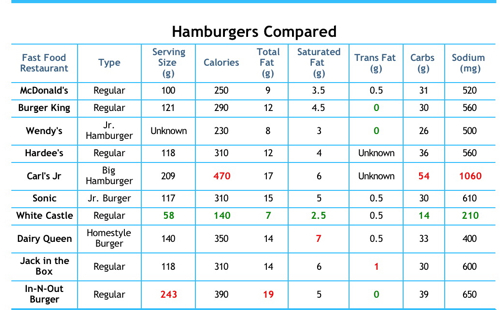 Now as if this mega load of work wasn’t enough, the author also made the comparison charts so that they could be ranked by nutrient. So, for example, if you want to see which of the hamburgers contains the most calories, you find the hamburger comparison chart and click ‘Calories’ and Voila! they will be ranked from least to most. If you want to find which of the chicken nuggets or pieces or, as the old ad says, parts (parts is parts) has the fewest carbs so you can see if it’s worth indulging, you click ‘Carbs’ and you have the chart below, arranged from fewest to most. Who would of thought Wendy’s 5 pc Chicken Nuggets contains the fewest grams of carbs? And who knew that the Arby’s 5 pc Chicken Tenders contains four times the carb of the Wendy’s? Not I. 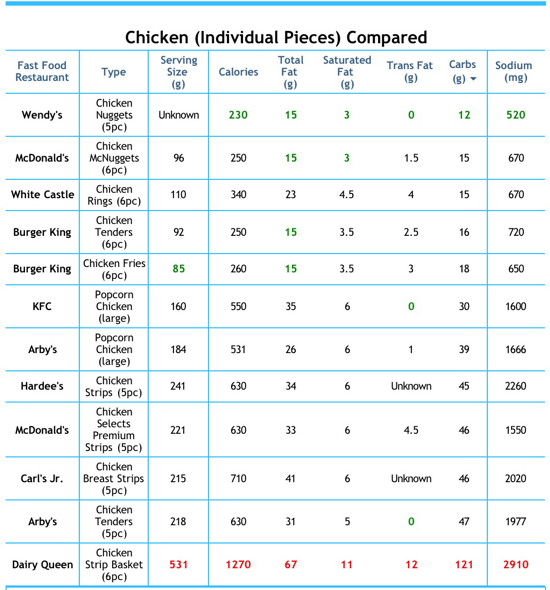 I roamed through a couple of the fast food company nutritional information pages to do my due diligence before recommending these fast food comparison tables. I didn’t check with every one, but the ones I did check were on the money, so I’m pretty sure the author did a good job in listing the nutrients accurately.
Have fun playing with the charts and discovering just how nasty all that fast food you’ve eaten really is. There are a few other posts on this blog that are worthwhile, but, sadly, the author has bought into the idea that fat is bad, carbs are good (or at least aren’t responsible for weight gain) and that the only thing that matters is calories. Where have we heard that before?
Despite his being misguided in terms of what causes weight gain, the author has done us all a great service by making this material available. And even though I don’t eat fast foods, I appreciate his efforts. I have learned one thing, however. Whenever I take the notion to indulge in a little restaurant junk food, it seems that I always succumb to the onion rings. I always figured that they probably had a few grams of trans fats, but that the carbs weren’t all that bad. Not that bad?!?!? The lowest one of the bunch contains 45 grams of carbs, which is the equivalent of almost a quarter of a cup of sugar, not to mention 4.5 grams of trans fat. I hope this new knowledge tempers my enthusiasm the next time the onion ring demon begins to prey on my soul.