A reader sent me a link to the CSPI (Center for Science in the Public Interest) Scam site, which is great. It will become a part of my daily read.
In the particular link she sent, there was a video of Michael Jacobson, the director of CSPI, making an appearance on Steven Colbert’s show. 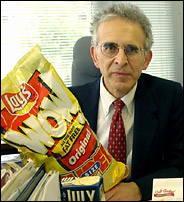 Colbert, of course, made Jacobson look like a fool, which he pretty much does with everyone who ventures onto his show. But his making a fool of his guests only works if the guests don’t go along with the joke and try to remain on their message and stay the pompous windbags that most of them are.
Jacobson didn’t disappoint. In fact, he played right into Colberts hands. I’m sure Jacobson had a media consultant tell him to try to be light and upbeat and go with the flow, which, in Jacobson’s mind translated into hunching over the table while maintaining a Cheshire cat rictus throughout the interview. Pompous windbag that he is, Jacobson couldn’t resist trying to stay on message, which made him look all that much more ridiculous. I’ll have to admit to experiencing more than a little schadenfreude as I watched.
What I found most interesting about the interview comes at the end. Under Colbert’s prompting Jacobson spirals off into a discourse about the dangers of trans fats and how they’re slowly but surely being removed from the food supply, saving thousands of lives in the process. What Jacobson doesn’t elaborate on – and what I wish Colbert had known and injected into the dialog – is that CSPI, Jacobson’s own group, is largely responsible for putting trans fats in the food supply in the first place. I guess it’s a great gig if you can get it. First, you militate to replace a harmless substance with a harmful one (replacing saturated fat with trans fat in this case), then you get traction and publicity by militating to remove the harmful substance that you were greatly responsible for putting in place. And look like the hero in both cases.
At the very end, Jacobson goes off on a riff against salt, which I find hilarious. Au contraire to what you read all the time and what such idiots as Jacobson babble, salt is actually good for you. Especially salt in its natural form, filled with other minerals and trace elements (which deserves a whole post by itself). Even regular old table salt, which has been vilified, has, in the end, been shown to be pretty harmless. All the Sturm and Drang about the dangers of salt have turned out to be way, way overstated. I can’t believe that Jacobson is now making a case against salt when it has been shown to be innocent of the charges against it. I guess old habits die hard.
Here is the the video. I hope you enjoy it at much as I did.