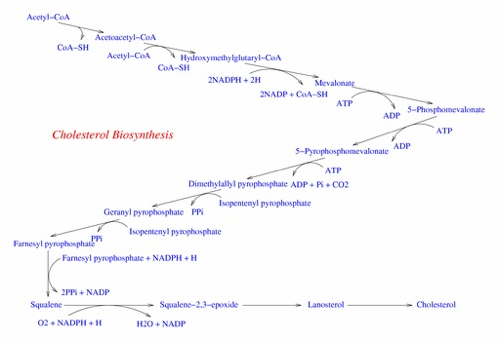 A recent study published in the online journal Lipids in Health and Disease demonstrates that low-carbohydrate diets act in much the same way statin drugs do to reduce cholesterol.
Before we delve into what this study shows, let’s take a moment and discuss the synthesis of cholesterol in the body.
Although every cell can make cholesterol, most is made in the liver and small intestine. The fact that every cell can make cholesterol should at least imply that cholesterol is a pretty important molecule, which indeed it is. Most of the cholesterol in the body is made in the cells, but about 15 percent of it comes from the diet.
When a cell needs cholesterol it has two places from which to get it: it can make it and/or it can get it from the blood. Usually it does both. If the cell makes cholesterol it goes through the multi-step process shown above. If the cell wants to get cholesterol from the blood, it synthesizes little protein structures called LDL receptors that it sends to the surface of the cell. Once on the surface of the cell these receptors bind to LDL-cholesterol in the blood and transport it into the interior where the cholesterol is released for use by the cell.
As in all synthesis pathways there is a single reaction in the long chain of reactions that is the rate-limiting one, the reaction that determines the overall output of the pathway. In the case of cholesterol synthesis this reaction is the step shown in the diagram below in which hydroxymethylglutaryl-CoA (HMG-CoA) is converted to mevanolate, catalyzed by the enzyme HMG-CoA reductase.
Scientists have known for years that the enzyme HMG-CoA reductase is the rate-limiting enzyme in the 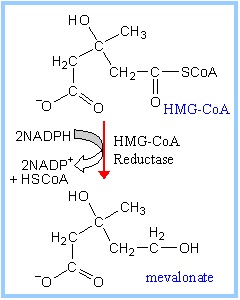 entire cholesterol synthesis cascade. They figured that if they could design a drug that would interfere with this enzyme, they would have a drug that would lower cholesterol. The class of drugs ultimately developed to perform this task are the statins. Statins are a type of drug called HMG-CoA reductase inhibitors.
When statins (or anything else) inhibit HMG-CoA reductase, the cells can’t make the cholesterol they need to function properly so they resort to the other method and synthesize many LDL receptors that are dispatched to the surface to harvest LDL-cholesterol from the bloodstream. The LDL-cholesterol extracted from the blood means there is less in the blood and levels measured are lower, which is why statins reduce LDL-cholesterol levels.
Now that we’ve had the briefest of primers on cholesterol synthesis, let’s look at this enlightening study. It would seem that if people eat a lot of cholesterol – as they usually do on low-carb diets – that cholesterol levels would go up. But it has been shown that in people following low-carb diets this doesn’t really happen. Why is this the case? That’s what the researchers who did this study wanted to find out.
Subjects were randomized into two groups, both of which consumed low-carb diets (10-15% energy from carbs, 30-35% from protein and 55-60% from fat) for 12 weeks. The groups differed in that one group was given an extra 640 mg per day of cholesterol in the form of eggs while the other group was given an egg substitute containing no cholesterol.

Mononuclear cells were taken from the blood of these subject, then RNA was extracted from these cells. The researchers then used the polymerase chain reaction to determine the amount of messenger RNA (mRNA) for both HMG-CoA reductase and the LDL-receptor protein. (If you need to brush up on mRNA and protein synthesis, take a look at the video in this post from about a year ago.) In short, mRNA correlates with the amount of a specific protein being synthesized – if mRNA is high, then a lot of this protein is being made.
When researchers measured the mRNA they discovered that in those subjects consuming the extra cholesterol there was a significant decrease in the amount of HMG-CoA reductase mRNA ( which means a decrease in the amount of HMG-CoA reductase being made) and a decrease in the amount of LDL-receptor mRNA. The subjects consuming the lesser amounts of cholesterol had the opposite findings – they made more HMG-CoA reductase and more LDL receptors.
What does this all mean? It means that a low-carbohydrate diet allows the body to regulate cellular cholesterol levels over a wide range of dietary cholesterol levels by changing the cellular synthesis and uptake. And it does all this by acting in much the same way that statins do, but without all the side effects.
Another interesting finding in this study is that the group who ate the extra cholesterol had a 21% increase in HDL-cholesterol levels while the group consuming the lower amount of cholesterol had no HDL-cholestrol increase over baseline.
The take-home message from this study is that you don’t really have to worry about the extra cholesterol you might be getting in your low-carb diet. Your body will deal with it nicely. And if you want to go up on the cholesterol by, say, eating a few more eggs, not only will your body compensate, but it will throw in some extra HDL in the bargain.
In short, don’t worry about your cholesterol on a low-carb diet.