Im throwing up a quick post just so you all wont think Ive been captured and sold into slavery.  MD and I are on the coast-to-coast Sous Vide Supreme introduction tour, which  ends today.  I thought I would have plenty of time to blog and Tweet on this tour, but it has ended up being a huge time gobbler.  What with getting all the stuff set up, checking in and out of hotels, running for flights and flying all over heck and gone, there has been barely any time to keep up with emails let alone fiddling with the blog.

As I type these words, were at 37,000 feet somewhere between Chicago and New York.  After all the complaining Ive done in previous posts about my disastrous experiences with a multitude of airlines, Ive got to say that this tour has gone without a hitch.  Weve flown U.S. Air, American, Alaskan Airlines, and now Delta, and all flights have been on time on both ends.  Were traveling with a crew of nine, so I am thankful for all the airlines weve flown and the weather gods for allowing all this to come off on schedule.

I planned to post about the different venues as we went from city to city, but as I said, the time constraints have been such that I really couldnt do it.  Ive got a zillion photos that Ill post in due course and a lot of info about cooking that Ive learned from the best.

Richard Nikoley, of the Free the Animal blog, came to the San Francisco event and posted on it, so you can read his take, complete with photos, here.

Another writer who attended the San Francisco event wrote about it after.  Its a good article but I object to the word shilled.  In my obviously biased view, touted or promoted or recommended would have been much better choices.  Other press reports that are much better (from my perspective, at least) are here, and here.

As you can see from the above articles and blog, Heston Blumenthal, chef of The Fat Duck, one of the worlds best restaurants, is traveling with us and helping us introduce the Sous Vide Supreme to the world.  Heston and team (several of whom are with us, too) did the testing of the Sous Vide Supreme in The Fat Duck Experimental Kitchen in the UK.  As one of the preeminent and most knowledgeable sous vide chefs in the world, Heston is also doing cooking and teaching demos with the unit on this tour.

At this point in my narrative breakfast arrived.  It is pictured below.  You can see to what depths airline food has fallen. 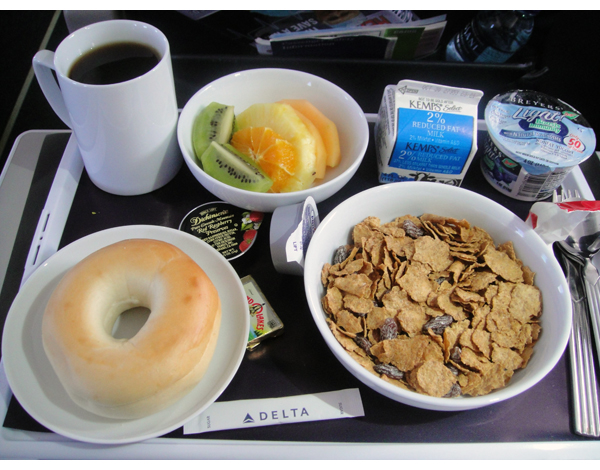 Low-fat yogurt, 2% milk, Raisin Bran, fruit, a bagel and coffee.  How nauseating.  I will admit, however, that I ate almost all of it, middle-aged middle be damned.  I did leave over half the bagel because it was totally tasteless, much like eating cardboard and as cold as stone.  I havent worried much about diet on this tour because weve been eating one meal a day – if were lucky – so Ive been viewing the experience as an intermittent fast.  We get little shards of the foods prepared for the demo, but thats about it.  The rest of the time were on the run and havent eaten much at all.

So you can see how the demo events are set up, Ive put up the schedule and menu to the left below.

MD and I introduce ourselves and talk about how the Sous Vide Supreme was developed, much as I did in a recent blog post.  We then introduce Heston, who shows a video of the preparation of Mock Turtle Soup, which I also blogged about not too long ago.  He follows that with a short video of a dessert composed of all the essences of smoke, apples, leather and tobacco and four different whiskies – all incorporated into a flaming sorbet.  He then talks about how he started The Fat Duck with just himself, a dishwasher and a couple of waiters.  Then he moves into the different foods prepared using the Sous Vide Supreme and talks about all the extensive testing he did of the unit at The Fat Duck.  The staff passes around tasting plates of the food selections to the guests, most of whom are media people, food writers or chefs.  The food is absolutely beyond compare.  When I have more time, Ill post a description of how each different food is prepared and show photos, of which I have a multitude.

After the event in New York is over today, MD and I have to do a little Middle-Aged Middle promotion tomorrow with some radio, then its off to Las Vegas (of all places) for a couple of days.  My niece is getting married there on Sunday (she lives there and is a graphic artist for one of the casino operations), so were stopping on the way back to attend.  Then, finally, home on Monday.  At which point, after going through all the mail and other stuff that has stacked up while weve been on the road, Ill get back to more regular posting.

I got word yesterday that the 6-Week Cure blog is set up and ready to go, but so far we havent been able to post anything to it.  If youve got a 6-Week Cure question or comment, hold it for just a couple more days til we get that blog up.  And if youve had a question languishing in the emails, were working on that, too.  We had an unexpected glitch, when the new email contact points got mistakenly routed to an email that we never use by the web gurus.  There they sat for about a month before we realized that was why we werent getting any emails from the new site.  We apologize and as soon as we get back to Casa Eades well get busy answering those we can answer.

Im working on another fun post that Ill maybe be able to get up before we get back, but I cant promise.  At any rate, itll be up soon after were home if not before.

Thanks for hanging in there during my absence.