Obesity in the past 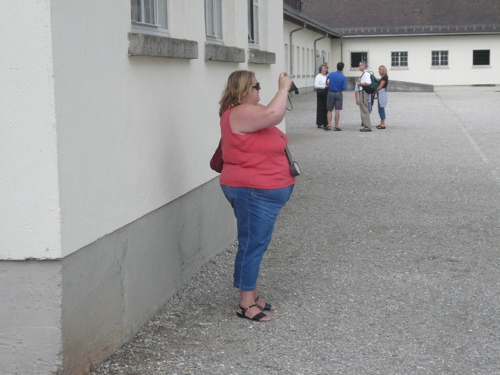 American tourist at Dauchau
A type of activism called fat acceptance activism – or in the words of all the isms we’re now afflicted with: Sizeism – is currently on the move. Overweight people who are the movers and shakers of the various fat acceptance groups are trying to make the point that it’s okay to be overweight and that one should revel in one’s fatness and not try to deal with it. I don’t really have a problem with this way of thinking as long as people are willing to accept the risks that ride along on obesity’s coattails.
I think it’s fine that overweight people are trying to gain acceptance. I don’t believe that they should be discriminated against anymore than I believe people with leukemia or high blood pressure should be discriminated against. But, obese people need to realize that in the vast majority of cases their obesity is self inflicted.
I can’t tell you how many patients I’ve seen in practice who say these very words: Doctor, I just can’t understand it. I almost don’t eat anything at all and I can’t lose weight. My husband (it’s usually a female patient that says this) eats everything and he never gains weight. As we’ve seen self deception is an easy task.
I’ve made it a hobby to watch people at all-you-can-eat buffets, and what I see is obese people piling the food on their plates- mainly high-carb food – and going back for more. Thin people go back to their tables with small plates of food. I often wonder how many of these people with the huge plates of food are telling their doctors that they don’t eat much of anything at all yet still can’t lose.
People who tell me that they almost never eat and still can’t lose weight drive me nuts because I know it doesn’t work that way. It puts me in a bad position because I know they’re either fooling themselves or trying to fool me and I either have to nod my head in understanding or basically call them liars. It’s a tough spot.
On our recent trip to Europe MD and I spent a day at Dauchau, the first Nazi concentration camp and the model for all the others. It was a sobering but incredibly interesting experience. Throughout the facility there are photos of the camp inmates during the years the camp was in operation (1933-1945), and I didn’t see a single fat person. These were truly people who “almost ate nothing at all” and they were all thin, very thin.
Most readers of this blog know that there are other ways to lose a lot of weigh without resorting to concentration-camp-style starvation, namely the low-carb diet. But I had to vent a little because I get so annoyed when people tell me that they don’t eat yet can’t lose weight.
The fat acceptance movement – which is what this post started out to be about – is nothing new. Way back in the early 1900s obesity in women was becoming accepted in this country as a positive thing. From the February 1919 Atlantic Monthly:

The fat woman has been so long accustomed to commiseration that it may be difficult for her to realize her new dignity; we have all pitied her, been sorry for the bursting glove-clasp, the exuberant girth, the sweets desired but denied, the chin whose apparent hauteur was so unjust to the kindly heart beneath it; and above all for that plump palm laid upon our arm with its accompanying tremulous whisper, ‘Am I as fat as she, or she, or she?’ [my italics]
But now all that evil time is forgotten. The anti-fat nostrum, the recipes for rolling, the panting mountain climb, all the many-doctored advice, all the beauty-parlor pummeling—all this is obsolete, for obesity has come into its own. The corpulent dame now has dresses made to exhibit, not to conceal, her shapeliness; these throng authentic fashion-sheets. She has her own clothes, not the adapted ‘line’ of the lean and lovely sylph. The fat woman is no longer done out of her inheritance by a cruel and carping world. She has become a ‘stylish stout.’

So sizeism -at least for women – is nothing new. But the country wasn’t yet so accepting of male obesity:

It is a curious fact that in neither East nor West has the stylishness of stouts been extended to the male sex. The norm for man is to be long and limber. As the hero of romance, a man may be brawny; but except in farce, he may not yet be fat. In America this ideal of masculine slimness is explained by our fondness for thinking of our men as lean wrestlers with frontier conditions, for the fact of a frontier is still a pleasant figment of our fancy. As a matter of brutal truth, both our men and our women have swelled perceptibly during a long period of plenty and of ease. Not all our Hooverizing has notably reduced the tendency of both sexes toward an opulent maturity. The pitiful point is that our men are not yet allowed by fashion to grow fat with dignity. Of course, it has never been so hard for a man to be voluminous as for a woman, because he thinks only of how uncomfortable he feels, and not, concomitantly, of how ungainly he looks. And yet the fat man has had pain enough in being the butt of the papers and of his pals; and from this anguish he cannot be relieved until fashion lifts its ban from his person as it has lifted it from that of the lady. No shop is as yet exhibiting styles for the stout man. He is still forced to squeeze himself into clothes designed for the stripling.