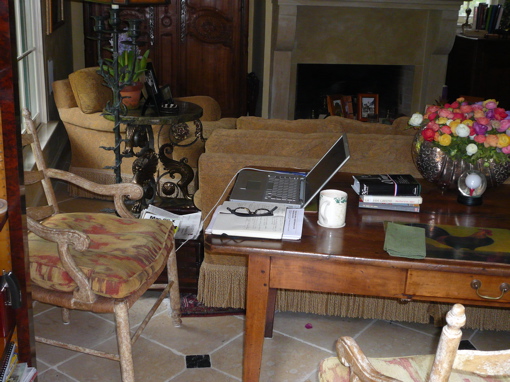 Here is a picture I took yesterday morning of my end of the table. Compare it to the one you find here.
As you can see, the giant, towering mass of papers are gone, the old Thinkpad is gone (banished to the office upstairs where MD is now using it thanks to a crash of her desktop PC yesterday), the stack of books is gone, and all the other ratty mess is cleared away. Nothing left but my day planner atop a few medical papers that are my blog fodder for the next couple of days.
You can see one small stack of books behind the Mac. Those were buried in the rubble of the enormous stack of newspapers that I went through. During the excavation these books turned up at various levels in the stack. It was much like an archaeological dig as I could determine when I had last seen the particular book by the dates of the papers it was stuck in between. I had been looking for all three of these books and had no idea where they were until they were unearthed one at a time.
Here they are in close up. 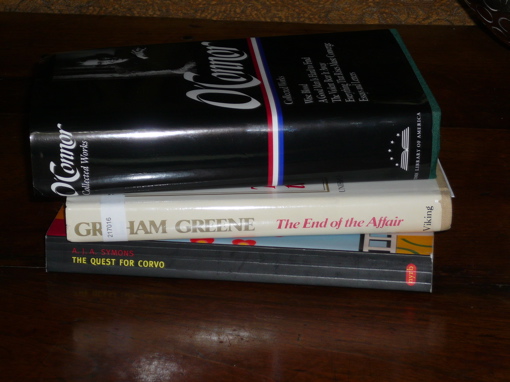 The bottom one, The Quest for Corvo, is an absolutely spellbinding biography – sort of – written in the late 1920s by an Englishman who had become immersed in a quest to learn more about a shadowy author whose book had mesmerized him. He couldn’t understand how someone who could write such a book could be so unknown, so he set out to track down the author and find out. His book is about the making of a biography in the long pre-online days when letters and meetings with sources were the norm. Along the way you find out much about the ellusive priest Fr. Rolfe, aka the Baron Corvo. A splendid read.
The next one up is Graham Greene’s The End of the Affair, which I bought used from Amazon. I’ve read a ton of Greene, but never this book, arguably his most famous. I received it, somehow stuck it in the growing stack of papers, and could never find it.
Finally, on top, is the Library of America’s Collected Works of Flannery O’Connor. Flannery O’Connor is one of my all time favorite writers, and when I read that her collected works were being published by the Library of America in one of their well-bound, small-sized volumes, I ordered it immediately. And lost it to the growing pile soon thereafter. I searched the house top to bottom looking for it, finally giving up when I thought I remembered leaving it in Tahoe. So much for my memory. When I dug the book out, I found a place mark at the page of one of my favorite O’Connor short stories where one of my favorite lines in all of literature resides.
The story is The Life You Save May Be Your Own, and like all of her stories, it is set in the deep South. At the start of the story and old woman and her severely mentally disabled daughter watch a sort of hobo with one arm missing walking toward their house. His name, it turns out, is Mr. Shiftlet, and he is seeking work. The old woman could use a hand around the house, but she can’t really afford to pay for one, so she’s trying to get him by giving him a place to sleep and feeding him. Here is an excerpt of part of her interrogation:

A fat yellow moon appeared in the branches of the fig tree as if it were going to roost there with the chickens. He said that a man had to escape to the country to see the world whole and that he wished he lived in a desolate place like this where he could see the sun go down every evening like God made it to do.
“Are you married or are you single?” the old woman asked.
There was a long silence. “Lady,” he asked finally, “where would you find you an innocent woman today’? I wouldn’t have any of this trash I could just pick up.”
The daughter was leaning very far down, hanging her head almost between her knees, watching him through a triangular door she had made in her overturned hair; and she suddenly fell in a heap on the floor and began to whimper. Mr. Shiftlet straightened her out and helped her get back in the chair.
“Is she your baby girl?” he asked.
“My only,” the old woman said, “and she’s the sweetest girl in the world. I wouldn’t give her up for nothing on earth. She’s smart too. She can sweep the floor, cook, wash, feed the chickens, and hoe. I wouldn’t give her up for a casket of jewels.”
“No,” he said kindly, “don’t ever let any man take her away from you.”
“Any man come after her,” the old woman said, ” ‘ll have to stay around the place.”
Mr. Shiftlet’s eye in the darkness was focused on a part of the automobile bumper that glittered in the distance. “Lady,” he said, jerking his short arm up as if he could point with it to her house and yard and pump, “there ain’t a broken thing on this plantation that I couldn’t fix for you, one‑arm jackleg or not. I’m a man,” he said with a sullen dignity, “even if I ain’t a whole one. I got,” he said, tapping his knuckles on the floor to emphasize the immensity of what he was going to say, “a moral intelligence!” and his face pierced out of the darkness into a shaft of doorlight and he stared at her as if he were astonished himself at this impossible truth.
The old woman was not impressed with the phrase. “I told you you could hang around and work for food,” she said, “if you don’t mind sleeping in that car yonder.”
“Why listen, Lady,” he said with a grin of delight, “the monks of old slept in their coffins!”
“They wasn’t as advanced as we are,” the old woman said.

That last line – “They wasn’t as advanced as we are.” – somehow strikes me as hilarious. It’s become part of the Eades family lexicon, used whenever one of us talks about someone doing or saying something stupid. We always say: They wasn’t as advanced as we are. Which has no relation to the O’Connor story, but the line is applicable nevertheless. In fact, the line has been used quite often in reference to Dean Ornish, PETA, and the rest of the militant vegetarians.
(You can read the entire short story here)
It’s back to blogging with a clean workspace and a post-nagging wife.