I always love it when politicians of any stripe who try to play the Aw-shucks-I’m-just-regular-folks role have it blow up in their faces.
The latest ploy of all the sods running for office is to create MySpace pages to show that their really just one of the guys. This is done, of course, in an effort to garner votes from the generation Xers who are the main denizens of MySpace. It seems pretty smarmy to me since MySpace isn’t really the typical province of 50-60 year-old multimillionaires. But, there they all are, trying to scarf votes from a bunch of geeky kids, most of whom are probably still living at home with their parents.
John McCain decided to give it a go and had the twits who run his website (I’m assuming) set him up on MySpace. Problem is said twits hadn’t bothered to realize that there were people out there a whole lot smarter than they at the MySpace business. One of these people is Michael Davidson, who designed one of the popular MySpace templates, and who is the co-founder of Newsvine, an online news mag. When Mr. Davidson discovered that Camp McCain had used his product and even server space without his permission or without even giving him credit, he decided to have a little fun.

Mr. Davidson then strikes with a vengeance.

So, the only thing necessary to effectively commandeer McCain’s page with my own messaging was to simply replace my own sample image on my server with a newly created sample on my server. No server but my own was touched and no laws were broken. The immaculate hack.
Abortion? The Iraq War? Probably too heavy to joke about. Gay marriage seemed like a more of a non-lethal subject to center the prank around.
So with a few minutes in Photoshop and a quick FTP, a new John McCain was born…
…and The Straight-Talk Express isn’t just for straight people anymore.

Read Mr. Davidson’s full post; it’s hilarious.
Here is the before and after John McCain post on his MySpace page. Note the little twist of the knife, too, in the bottom of the ‘Dear Supporters’ statement. Mr. Davidson placed a link to his own website newsvine.com. Heh, heh, heh.
(Hat tip to Tech Crunch) 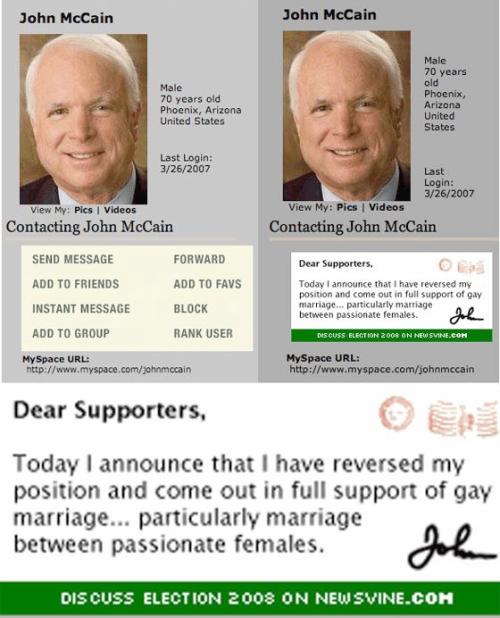