If you must have fast food… 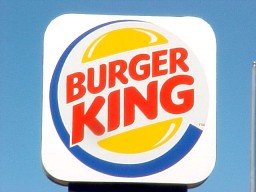 If you feel like you’ve just got to have a fast food fix, I would suggest Burger King. Why? Because Burger King has taken steps to procure at least a portion of its meats from suppliers that raise and slaughter their animals humanely.

In what animal welfare advocates are describing as a “historic advance,” Burger King, the world’s second-largest hamburger chain, said yesterday that it would begin buying eggs and pork from suppliers that did not confine their animals in cages and crates.
The company said that it would also favor suppliers of chickens that use gas, or “controlled-atmospheric stunning,” rather than electric shocks to knock birds unconscious before slaughter. It is considered a more humane method, though only a handful of slaughterhouses use it.
The goal for the next few months, Burger King said is for 2 percent of its eggs to be “cage free,” and for 10 percent of its pork to come from farms that allow sows to move around inside pens, rather than being confined to crates. The company said those percentages would rise as more farmers shift to these methods and more competitively priced supplies become available.

2 percent and 10 percent are small numbers, but it’s a huge step in the right direction. As more and more consumers vote with their dollars, more and more changes like this will take place. Not only will the animals that provide us food have better lives and easier deaths, the food they provide will be better quality.
I can’t believe I’m even writing these words, but I have to tip my hat to PETA for helping bring these changes about.

The changes were made after discussions with the Humane Society and People for the Ethical Treatment of Animals, known as PETA.
PETA, in particular, has started a series of high-profile campaigns to pressure fast-food companies to change their animal welfare practices, including a “Murder King” campaign that ended in 2001 when Burger King agreed to improve its animal welfare standards to include, among other things, periodic animal welfare audits.
Since that time, PETA officials said they had met periodically with Burger King officials to encourage them to adopt tougher standards. About a year ago, the Humane Society began its own efforts to encourage Burger King to improve its farm animal standards.
Mr. Grover [vice president for food safety] said his company listened to suggestions from both groups, but ultimately relied on the advice of its animal welfare advisory board, which was created about six years ago and includes academics, an animal welfare advocate, an executive of Tyson’s Foods and Burger King officials.

Whatever the reason and whomever they listened to, it’s a change that’s long overdue and I applaud it. So, next time you get the urge for a burger, head to the King and vote for better animal practices. Next thing you know, they’ll be serving grass-fed only.