Hard at work on Orcas Island 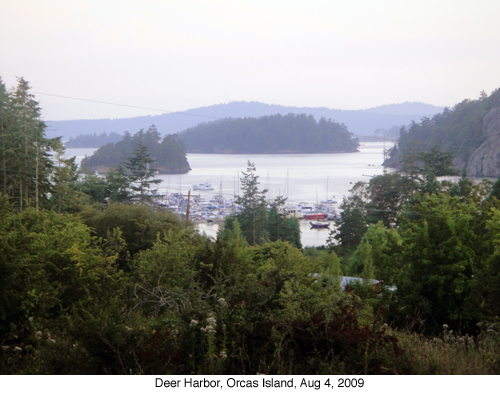 After meetings all day long Monday and Tuesday, we left with our partner to head for his place on Orcas Island.  We drove for an hour and a half then took a ferry for an hour to get there where his wife, who had gone up the day before, was patiently waiting.  We went to dinner and headed to the house.  We got there long after dark and crashed.  I always love to wake up in the morning in a place that I haven’t yet really seen because I arrived under the cover of darkness the night before.

Our partner’s house has a phenomenal view overlooking the sound and is nestled in among the Douglas firs, many of which are at least four feet in diameter.  It is really a forest primeval and a great place to vacation. Unfortunately, we had come to work.

After a breakfast of eggs and bacon, we set to.  MD was working inside on our traveling laptop while I sat outside on the deck and made calls.  In the photo below, our partner is on the phone to London and I’m on the phone to God only knows, since I had about a dozen calls I made while he made only the one. 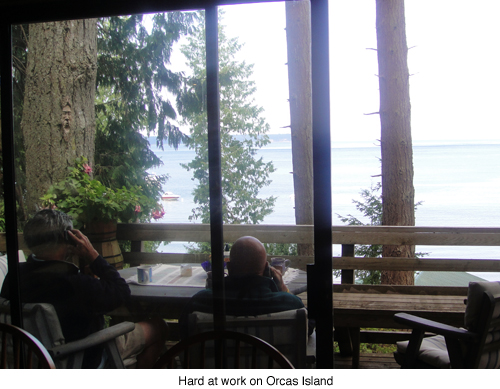 As you can see, it’s not too shabby a place to work.  And work we did.  We got a lot accomplished before we took a break to set out the crab traps to get our dinner for that night.

We rowed out to the boat, unhooked from the mooring ball and headed out to our partner’s secret crabbing spot a couple of miles away.  It was so secret that we could locate it only by the dozens of other crab traps there. 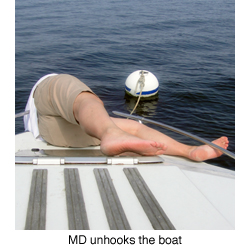 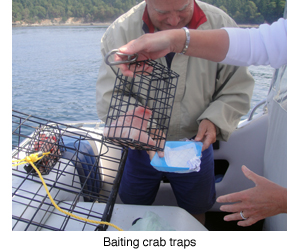 After setting out the trap, we came back, worked a little more, then broke for lunch.  We went into the tiny town of Eastsound and ate at Roses, a lovely little restaurant, serving all natural or organic food.  Our 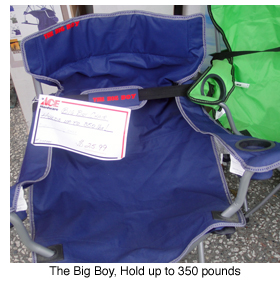 friends needed to run by the hardware store, where I found the item pictured below.  It is a testament to America today (and the whole world, I fear,) when manufacturers can make money producing products like this one.  Thirty years ago there would not have been enough demand to justify mass producing these chairs.  But today I wouldn’t be surprised if it weren’t one of their biggest sellers (no pun intended).  As you can see from the photo, it is named The Big Boy, which implies a large, football-lineman-like physique, but which is really a euphemism for The Obese Boy (or girl).  As I’ve written before, these things make my blood boil, because so many people have been victimized by doing what the ‘authorities’ recommended they do.

We went back to the house, worked for the rest of the afternoon until it was Jameson time.  We walked to the beach (about 50 yards from the house) and sat in the sun waiting for the tide to get right so we could head for our crab trap. In due course, we rowed back to the boat, MD unhooked us again, and we were off to the traps.  On the way there we saw a commotion ahead in the water.  At first I thought it was dolphins, but as we got closer we realized it was two seals (not sea lions) fighting.  They were going at it hammer and tongs.  They would surface with one latched on to the other’s neck with its teeth, then both would submerge.  I thought they might just be playing until I noticed the blood everywhere.  The fight continued as we circled around watching.  I had my camera, but couldn’t get a decent photo because every time I clicked the shutter, the seals went back under during the lag between clicking and the shutter opening.  At last one seal gave up and swam away.  So we went on our way to the crabbing spot.

Once there I got the joy of pulling up the trap from about 80 feet of depth.  As it neared the surface, we could see a few Dungeness crabs within, so we knew we had dinner. 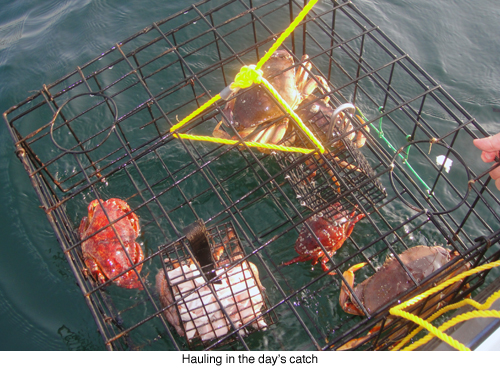 When we got back to shore, we set about cleaning the crabs, an activity fraught with a little peril.  The crabs are not particularly happy about being dragged from their briny lairs and are especially not happy to be handled.  They are extremely quick and have large, strong pincer claws in the front; they should be dealt with with care if you value your fingers.  I’ve never been pinched, but others who have say it hurts like the devil, and that they’re hard to dislodge once they’ve got a grip. 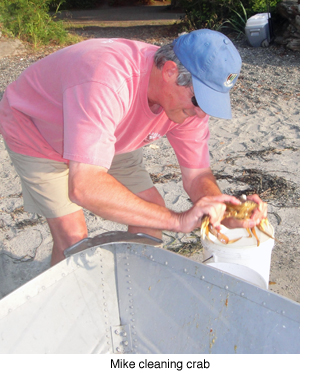 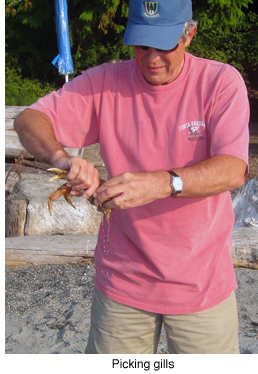 The cleaning is a grisly process.  You grab the crabs with both hands with one had holding all the claws on one side and the other hand holding all the claws on the other.  Grabbing them thusly is the difficult part, because they are strong and quick.  Once you’ve got them, you bang them down on their middles on some kind of an edge.  In this case, the edge of the aluminum row boat worked fine.  As the shells break, you pull hard on the handfuls of legs on both sides, which separate, and you end up with all the edible crab in either hand.

After you’ve got the legs apart, you then have to pick the gills out of the meat, which doesn’t take long, and then you’re ready to cook.

To cook, you simply put the legs into boiling salt water (water that we took from the ocean) for 8 to 10 minutes.  When you’re finished and plate them up, here’s what you have.  And they are delicious…if you like fresh Dungeness crab dipped in butter. 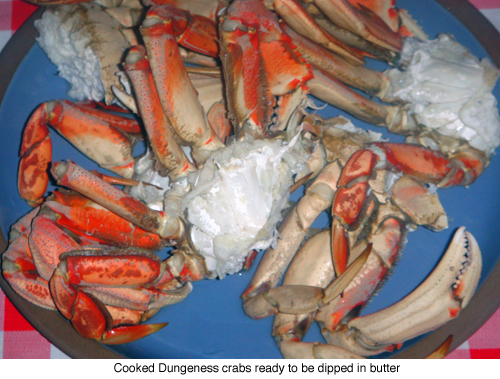 After dinner and cleaning up, we watched the gorgeous sunset over the sound.  We stayed up talking until about midnight, then hit the sack, got up and started a new day that was a repeat of the first.  Same people, same work, different clothes and different crabs, but basically the same day.  We repeated it a couple of times, then reversed our trek via the ferry and the drive to Seattle where we caught our plane home. 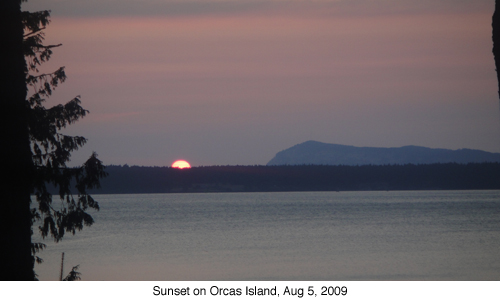 Good news!  Just as I was putting the finishing touches on this post, I received an email from our publisher informing me that they had actual printed books in hand and would be sending a couple our way.  This really does mean that they will be available before the publication date of September 8.  They will probably be in stores within a couple of weeks and, I would imagine, be available on Amazon and other online retailers soon.

If you plan to purchase the book it would really help if you pre-ordered it from Amazon.  The name of the game in book writing is to get on the NY Times list, and that involves selling a lot of books within a given week.  So, if we have a ton of pre-orders, they will all go out at once, and be recorded by those who set up the Times list.  Thanks in advance.

I will speak to the publisher tomorrow to see if I can post a lengthy excerpt soon.