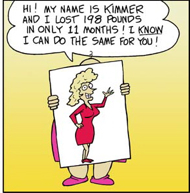 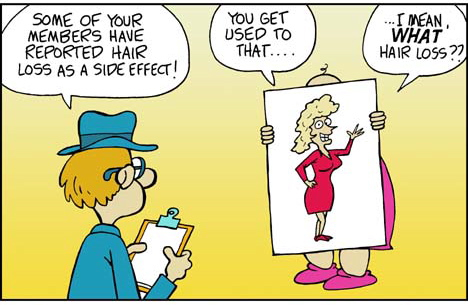 If you spend any time roaming around low-carb websites you will have stumbled upon posts about the now infamous Kimkins Diet. I haven’t made an in depth investigation into the situation, but from my brief readings it appears that an unscrupulous woman has been outed.

As I understand it a year or two ago a lady appeared on various bulletin boards and in low-carb chat groups alleging to have lost 198 pounds in 11 months on a modified version of the Atkins’ diet. Soon this woman had established a website and was promoting said plan as the Kimkins Diet, which sold for about $60. The Kimkins site had an affiliate program that paid others to send their friends to the site, which people apparently did in droves. The big Kimkins break happened when the diet got a cover article in Woman’s World magazine complete with cover copy proclaiming the diet to be “Better than gastric bypass!”

Since the Woman’s World article the Kimkins empire has begun to crumble. Many of the top poster children for Kimkins have seen the light and have turned apostate on their former guru. Kimmer, the sort of namesake of the Kimkins plan, has been revealed by a private detective to be one Heidi Kimberly Diaz, who, far from the svelte petite woman she represented herself as being, is definitely obese. A Los Angeles television news show has done a multi-part series on the Kimkins Diet, and now it looks like there will be a class action suit filed against the program and its promoter as well (if it hasn’t been filed already).

If you’re interested you can read about the entire affair replete with surveillance photos and videos and video testimonials of former Kimkins apostles who have seen the light through the following links (here, here, here, here and here)

I’m not writing here today to add further to the Kimkins story or to pile on this poor woman. I’m writing to provide reassuring information to a whole lot of Kimkins followers who are in distress. Based on my admittedly cursory trawling through a number of bulletin boards and in reading the comments on some of the sites I linked to above it became clear to me that many people who have followed the Kimkins Diet have had major hair loss.

Let me tell you what has happened.

You are experiencing a common problem called telogen effluvium, which is the medical term for acute hair loss due to a metabolic, hormonal or drug stress.

So you can better understand what has happened, let’s take a look at the normal hair growth cycle. Hair has a growth phase call anagen and a resting or dormant phase called telogen. Typically for hair on the head, anagen lasts around three years followed by telogen that lasts about three months.

This waxing and waning of anagen and telogen is why we continuously lose hair and yet our head of hair doesn’t continuously thin. And, I suppose, it goes without saying that not all of our hair is in lock step in this cycle otherwise we would have hair for 2-3 years, then it would all fall out at once. The estimate is that about 10% of hair on the head is in telogen at any given time, which means that the other 90% is growing normally. And even the 10% in telogen appears normal if you looked at an individual hair.

It’s just not growing and will ultimately be pushed out when the follicle converts to anagen.

But sometimes this cycle can be disrupted.

A number of stresses can send hairs from anagen to telogen before their time. Pregnancy, a major illness, a high fever, an injury, surgery (usually from the anesthesia), some medications and a major change in diet, especially going on a starvation diet.

The Kimkins Diet is nothing if not a starvation diet. It is a very-low-calorie diet, containing from 400-700 kcal per day. You saw the photos I posted of the subjects on the famous Keys’ 1600 kcal per day semi-starvation diet back in the 40s, so you can imagine what the Kimkins diet would do were you on it for a substantial amount of time. You would probably look like one of the women I posted on yesterday.

So, for those of you who went on Kimkins and suffered a major hair loss, here’s what happened. The nutritional stress from semi-starvation nature of the diet shocked your hair from anagen into telogen prematurely. You didn’t even notice it when it happened because you lost no hair. Months later when your follicles again went into anagen and became active, the new hair growing in began to push the old hair out. And because the nutritional stress sent much more than your normal ongoing 10% into telogen, you seemed to lose hair by handfuls.

Many people probably started losing their hair as they went off Kimkins and back to a more normal diet. At that time the hair follicles said (assuming hair follicles could speak): hey, stress is over; let’s start growing again. And they did start growing, pushing out the old dead hair.

So, the take home message is that if you lost a lot of hair during your time on Kimkins (or any other diet), don’t sweat it. It will come back. If it doesn’t, then you’ve got something more going on than telogen effluvium, and you need to pay a visit to your doctor. But usually if you look closely at your scalp (or have someone look for you), you’ll see little hairs growing back in. If you’re a female and have long hair, it will take a long time for your hair to grow back to its full length, but it will.

Is there anything you can do to hurry it along? Just make sure you get plenty of good quality protein and essential fats. And don’t worry about it.

I hope this helps a few of you rest a little easier.