One of Mike’s very favorite Christmas treats is a mincemeat pie. I like them, too, but having completely given up gluten, wheat, and most other grains about 18 months ago, I figured it was a holiday pleasure I would no longer get to enjoy. Not only from just the gluten avoidance standpoint, but the stone ton of sugary carbs in traditional mincemeat pie. 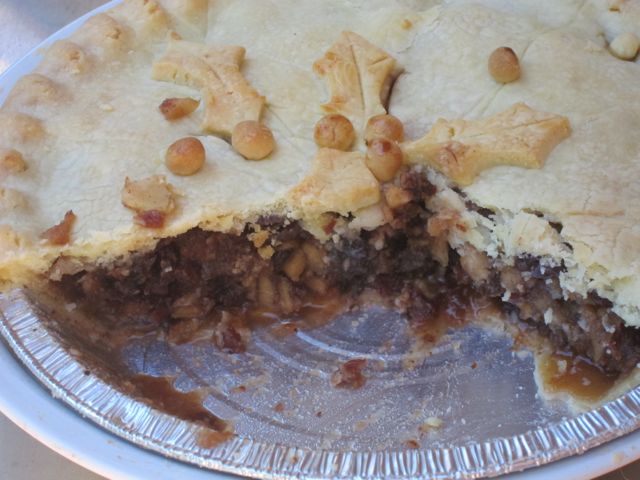 I decided to surprise him with a gluten-free, somewhat lower carb version of which we could both enjoy a sliver. Take careful note of the lower carb moniker. Granted this recipe is lower in carb than the traditional, but it is definitely NOT LOW carb pie. What with all the hazmat reconstruction going on at Casa Eades, I didn’t have the time to make a homemade gluten free, low carb crust. The crust of this pie was a commercially-prepared, refrigerated, pre-formed, gluten free–but not low carb–product and there are about 24 grams in just the crust of one slice! Consequently, I wound up tasting the filling and not eating the crust. First, here’s is the recipe as pictured. And after, I’ll riff a bit about how it could become lower!

Directions
1. Put all ingredients (except the crust) into the work bowl of a food processor and pulse about 10 to 12 times to chop coarsely (or more if you’d like less chunky.)
2. Put the mixture into an airtight container and refrigerate for at least 2 days before using. (There isn’t much sugar in this one to preserve it like there is in traditional mincemeat filling.)
3. When ready to bake, preheat the oven to 400F
4. If using store-bought crust:
a. slightly warm one crust to make it malleable enough to roll out
b. line the pie pan with the other crust
c. fill with the prepared mincemeat mixture
d. top with the second rolled-out crust, flute edges, trim and use trimmings to make holiday holly decoration
5. If making your own crust, you might consider my Simple Nut Crust or take a look here at a great recipe on a very helpful website called All Day I Dream About Food that if you don’t know about already, I think you’ll find a great resource for recipes both low carb and gluten free. It’s filled with yumminess!

So How Much Lower Is This Pie?
The carb content, even in this somewhat reduced version, is a splurge of mammoth proportions for a person truly cutting carbs. Each slice (8 slices of a 9 inch pie) tips the carb scale slightly north of 50 grams. And that’s far far too much for someone who is struggling at keeping control of blood sugar (diabetics and pre-diabetics) and will absolutely cause a metabolic stir in anyone with Syndrome X. Why, you can almost feel the insulin output, the fluid retention, the fuzzy thinking, the heart racing, the whoosh of calories flying into fat cells under insulin’s influence!

Not for me, thanks! So portion control is the still name of the game for this lower carb pie; even a sliver (about 1/3 of a slice) has 17 grams as prepared here. But at least they are 17 grams free of wheat flour and gluten. And refined sugars — this recipe eliminates the slug of sugar (about 100 more effective carb grams) found in the 6 ounces of dark brown sugar in the traditional recipe, which works out to a savings of about 12 grams per slice.

So it is decidedly NOT low carb.

How could you make it lower in carb and still seem like a mincemeat pie?

You could by flip the quantities of sugar-free cranberries and raisins — using 8 ounces of cranberries and only 2 ounces of raisins. The latter being the major remaining budget breaker, after eliminating the sugar, in this version — contributing 171 grams of effective carb to the total all by their lonesome. Recognize that this will no doubt make it a somewhat tarter pie and you may want to oonch up to amount of xylitol or Swerve you use to your own preference. The bottom line, though, is if you were to swap the proportions of the raisins and cranberries, you could save another 96 grams in the total pie, which would be another 12 g saved per slice. And with a low carb crust, such as the Simple Nut Crust or the almond flour pastry one on All Day I Dream About Food, you could save at least another 18 to 20. That would turn it into just 18 or 20 grams per slice, not over 50. Still a splurge, but a more manageable one for most folks.

However you low carb you wish to make it, here’s hoping you enjoy this (and all) holiday treats…as the beer commercials say…responsibly! And have a very happy and healthy New Year!