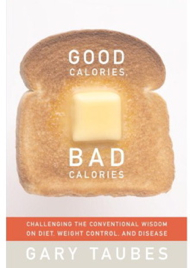 The Letters section of today’s New York Times Book Review carried Gary Taubes’ rebuttal to Gina Kolata’s self-serving review of Good Calories, Bad Calories. I was glad to see Gary strike back the way he did because it saved me some work.
In her review published earlier this month Kolata took Taubes to task for his conclusion that all calories don’t act the same in terms of how easily they make one gain weight. She accused him of ignoring specific studies done 50 years ago that she felt showed decisively that a calorie really is just a calorie irrespective of what it’s made of.

It’s known, though, that the body is not so easily fooled. Taubes ignores what diabetes researchers say is a body of published papers documenting a complex system of metabolic controls that, in the end, assure that a calorie is a calorie is a calorie. He also ignores definitive studies done in the 1950s and ’60s by Jules Hirsch of Rockefeller University and Rudolph Leibel of Columbia, which tested whether calories from different sources have different effects. The investigators hospitalized their subjects and gave them controlled diets in which the carbohydrate content varied from zero to 85 percent, and the fat content varied inversely from 85 percent to zero. Protein was held steady at 15 percent. They asked how many calories of what kind were needed to maintain the subjects’ weight. As it turned out, the composition of the diet made no difference.

A number of readers of this blog wrote comments asking me about these Hirsch-Liebel studies, curious if they really did show what Kolata reported that they did. I planned to write a post on this paper (it is a single paper, not papers) because Kolata totally misinterpreted it. But Gary saved me the effort because he provided the exegesis in his letter to the editor.

Rudolph Leibel and Jules Hirsch did not, as Kolata says, do the studies in the “1950s and ’60s,” when Leibel would have still been making his way from grade school through medical school. Rather, the study — singular — published in 1992, was a reanalysis of data gathered (on only 16 subjects) originally by Edward Ahrens of Rockefeller University. Ahrens was not studying weight regulation, ironically, but the ability of carbohydrates to elevate triglyceride levels and so increase heart disease risk. The Leibel-Hirsch paper itself argues against the use of the term “definitive” to describe it — i.e., it is rife with caveats. Among them, that Ahrens’s subjects could have gained 15 pounds a year from a unique fattening effect of carbohydrates — 150 pounds of excess fat in a decade — and Leibel and Hirsch’s analysis would have been unable to detect it. Moreover, only one of Ahrens’s subjects was obese, which means, as Leibel and Hirsch explain, that “similar results might not have been obtained in a group of obese individuals or lean individuals susceptible to obesity.” Since the hypothesis I discuss in “Good Calories, Bad Calories” is intended to explain the cause of obesity in precisely these individuals, it is odd to undercut my credibility by accusing me of leaving out a study that did not actually address that issue.

Here is the full text of the Liebel-Hirsch paper so that you can read it and draw your own conclusions.
If you decide to read this 1992 study yourself, I’d like for you to notice a couple of things. As Gary points out, this is not a paper reporting an actual study, but is a retrospective look at studies done 30-40 years earlier. The authors were looking to see if diets higher in fat tended to cause obesity. They selected subjects from these decades old records who were given diets differing in the ratios of fat and carbohydrate while keeping the protein constant. Liebel and Hirsch observed from these records that the group of specially selected subjects (more about which in a moment) maintained their weight on a specific number of calories regardless of the ratios of fat to carbohydrate. In other words, the researchers from years before had fed these subjects enough food to allow them to maintain their body weight within a small range and discovered that it didn’t matter what the composition of the diet was, the subjects required the same number of calories whether mainly carbohydrate or fat were provided. From this Kolata and others have drawn the conclusion that it doesn’t matter what the calories are made of since these subjects maintained their weights no matter what the macronutrient composition of the diet was. But there are a couple of flies in the ointment.
First, the six subjects who consumed the least amount of carbohydrate in the studies got 15 percent of their diet as carbs, 15 percent as protein and 70 percent as fat. And, on average, they got somewhere in the neighborhood of 10,000 mJ per day of energy. Since 4.1868 kcal equals 1 mJ, we know that they got an average of about 2400 kcal per day. 15 percent of 2400 kcal gives us about 360 kcal as carbohydrate. We know that a gram of carbohydrate is 4 kcal, so 360 kcal represents 90 grams of carbohydrate. Based on my clinical experience, I can tell you that 90 grams of carbohydrate is not a weight-loss amount. Most people need to get down around 50 grams or below to lose any appreciable amount of weight, especially if they’re consuming 2400 kcal daily, which is about the number of calories in the average non-weight-loss diet. So, it’s not really surprising that these people required the same number of calories to maintain as those did with higher carbs.
Second, if you look at last paragraph at the bottom of the left column on second page of the study, you’ll see the following sentence:

For inclusion in this analysis, each period of formula feeding had to be ≥ 2 wk and the subject had to have remained weight stable (to within 1 kg) within that period.

This means that in selecting the subjects for this study, the authors purposefully left out those who had not maintained their weight on whatever dietary regimen they were on. We don’t know if those not selected for the study gained or lost weight on isocaloric diets with lower or higher carbohydrate content. Since all the patients in this published paper were selected because they did not have a variation in their weights with diets of differing macronutrient compositions, it seems a little bizarre to me to use this paper to ‘prove’ that a calorie is a calorie.
But Gina Kolata would never let a little thing like this stand in her way. She tries to obfuscate Taubes’ refutation of her interpretation of the paper by replying:

Jules Hirsch, who in fact says he did do the study, said he and Rudolph Leibel published the data in 1992 precisely to counteract arguments like those made by Gary Taubes.

Say what?
Let’s look again at what she says in her review of Oct. 7:

He also ignores definitive studies done in the 1950s and ’60s by Jules Hirsch of Rockefeller University and Rudolph Leibel of Columbia, which tested whether calories from different sources have different effects.

She clearly says that Hirsch and Leibel did these studies in the 1950s and ’60s. As Gary pointed out, Liebel would have been in grade school at that time, so it is unlikely that he was involved. Leibel and Hirsch went back and looked retrospectively at data Edward Ahren’s had gathered 30-40 years earleir and published it in their 1992 study. If you look at this Liebel-Hirsch study you will find that they referenced two papers in stating where they got their data (#10 & #11). The first paper includes Hirsch as a coauthor along with Ahrens, but the second is Ahrens alone. If you look at the Ahrens-Hirsch paper, published in 1959 in The Lancet, you will find that it was a study of only two subjects, neither of whom had their weights listed. At most only two of the subjects could have come from studies that Hirsch was involved in. So Hirsch didn’t do the studies on the majority of the subjects discussed in the 1992 paper, Ahrens did.
It is likely that Kolata called Hirsch, who is now 80 and a real calorie-is-a-calorie advocate, and got him to back her up. Either Hirsch is stretching the truth or Kolata is misrepresenting what he told her about who really did the studies a half a century ago.
Kolata goes on to say in her refutation of Gary’s rebuttal:

Taubes says in his book that calories from carbohydrates are intrinsically more fattening, so this is a central question. The authors conclude: “Variations in fat intake from 0 percent to 70 percent of total energy under conditions of equal energy intake produced no significant changes in body weight over periods of observations averaging 33 days.” In other words, a calorie was a calorie was a calorie.

Um, yep, Gina, the weight doesn’t change no matter what you feed the subjects if you’ve selected for inclusion in your paper only subjects who showed no weight change. It doesn’t mean squat.
She goes on to smugly say the following:

As Taubes amply documents in his book, low-carbohydrate diets have been popularized periodically since the 19th century. Best-selling book after best-selling book promoted them. Yet if they work so well, why are so many people still searching for an effective way to lose weight?

Why not indeed, Gina?
Could it maybe be because you and Jane Brody and Marian Burros and diverse other idiots are out there telling everyone that low-carb diets will kill them? It’s difficult enough to stay on any diet in the face of constant naysaying, but in the case of the low-carb diet the naysaying is particularly heinous. People are told that they are clogging their arteries, damaging their kidneys, leaching calcium from their bones, ruining their livers and God only knows what else. Committed low-carbers can see through all the smoke and mirrors, but these folks are a minority. Most people who diet want to lose weight while getting on with their lives. They don’t want to make a study of the biochemistry and physiology of metabolism, they simply want to drop a few pounds. And for the most part they’re not all that dedicated, so it doesn’t take too many people telling them low-carb horror stories derived from all the myths Kolata and her henchmen promulgate to make these folks throw up their hands and go back to carbs.
It annoys me that the Times gave Kolata the space to attack Gary yet again. She wrote the poorly-researched hatchet-job review of the book in the first place. Gary should have been allowed his rebuttal without her refutation of his rebuttal. That would have been equal time for all, with her getting four times the space that Gary did. But that’s not the way the media works when one of their own is attacked. Nor is it the way the media works in general when one of its shibboleths – in this case, the idea that carbs may be unhealthful – is under attack. When I read Gary’s letter and Kolata’s response I was in the middle of a post on how the media denigrates anything with which they disagree while appearing to be fair and balanced. I’ll go ahead and put up the post in due course, but this exchange is a perfect example.