Just read through the August issue of the American Journal of Clinical Nutrition, which was chocked full of good articles. I’ll be kept in blogging fodder for several days just from the contents of this one issue.
The paper I want to discuss today is one that I find hilarious. It’s a report of the Hamburg Burger Trial and I find it hilarious because the results were so different than what the researchers expected. In fact, they mention how surprised they were to get these results. The only reason they should have been surprised is that they are either ignorant or stupid – or both.
If I gave most readers of this blog the same data the authors of the study had, the blog readers would not have been surprised. They would have expected exactly the outcome that resulted. Which makes the readers of this blog a whole lot smarter than the long list of scientists who authored this paper.
Here’s the setup.
Researchers in Hamburg, Germany recruited 24 healthy subjects with an age range from 18 to 65 years of age. They had these subjects undergo a 12 hour, overnight fast then show up at the lab where they provided a blood sample then baseline vascular function testing. Two hours after all the testing, the subjects were given one of the following meals from a Hamburg McDonald’s to eat:

Two hours after the subjects chowed down on one of these meals testing was repeated and repeated again four hours later.
The subjects went away and came back a week later and went through the whole rigmarole again until all 24 subjects had eaten all three of the above meals.
Before we get into how the results of the vascular function testing in these subjects came out, let’s digress a little to look at what was actually being tested. If you’re not interested in the how-tos of vascular testing, skip on down.
Arteries, the vessels that carry oxygenated and nutrient-rich blood to the tissues, are muscular tubes of varying size that have an inner lining that is incredibly complex in its action. This inner lining called the endothelium is only a single cell thick yet it controls the activity of the entire artery. The endothelium senses and responds to a multitude of both internal and external stimuli and produces and secretes a host of substances that can cause the artery to constrict, to dilate, and to repair itself. It can cause the blood to clot and can bring about interactions between various blood components. And this extremely powerful organ can’t even be seen with the naked eye because it is a layer one cell in thickness.
Since the endothelium is only a single cell in thickness it is prone to injury. In fact, most heart disease is caused by damage to the endothelial cells of the coronary arteries. Plaque forms beneath the endothelium and is usually initiated in an area of damage to the endothelial cells.
One of the ways scientists have developed to measure endothelial function is by what is called flow-mediated vasodilation (FMD).
When the flow of blood increases in an artery, the endothelium secretes substances that make the artery expand (dilate) to better carry the increased flow. When the endothelial cells are working properly they secrete plenty of whatever it takes to make the artery dilate; if the endothelium isn’t working or is inhibited by a drug or other substance or is injured, the cells don’t respond as well to the increased flow and the artery won’t dilate as much as it would were it under the control of a non-impaired endothelium.
Here’s how the FMD test works.
While your sitting comfortably and relaxed I use an ultrasound measuring device called a Doppler to determine the size of one of the arteries in your upper (or lower) arm. This procedure is painless and non-invasive. It’s much like getting an ultrasound test to see a developing fetus. Once I determine the size of the artery I put a blood pressure cuff on your arm and crank up the pressure. I get the pressure high enough to shut off blood flow in the artery I measured. I leave the cuff pumped up for a couple of minutes to let the blood in the artery beyond the cuff drain out and get carried away by the veins. Your arm beyond the cuff will start to turn kind of white due to this loss of blood in the tissues. Then I release the cuff. As I do the blood rushes in to fill the void. When it does it increases the flow through the artery in question. If the endothelium is healthy and is working properly it will quickly secrete vasodilating substances that will make the artery increase in size to accommodate the increased flow. If, on the other hand, the endothelium is damaged or is inhibited by a drug or other inhibitory substance in the blood, the endothelium won’t secrete the vasodilating substance quickly and the artery won’t dilate as much.
If I have a baseline reading of your FMD then give you an unknown drug and test again I can tell by how much your artery dilates after the drug as compared to how much it dilated before whether or not the drug is harmful to your endothelium.
The researchers conducting the Hamburg Burger Trial assumed that meal #1, the one containing the real McDonald’s hamburger crawling with saturated fat would knock the FMD test in the dirt and while meals #2 and #3 would show less endothelial damage because, after all, they were vegetarian and had almost none of that nasty saturated fat in them. Plus they had all these good antioxidants that the plain ol’ McDonald’s burger meal didn’t have.
Before I tell you the results, I want you to look at this chart that gives the macronutrient breakdown of the three meals. 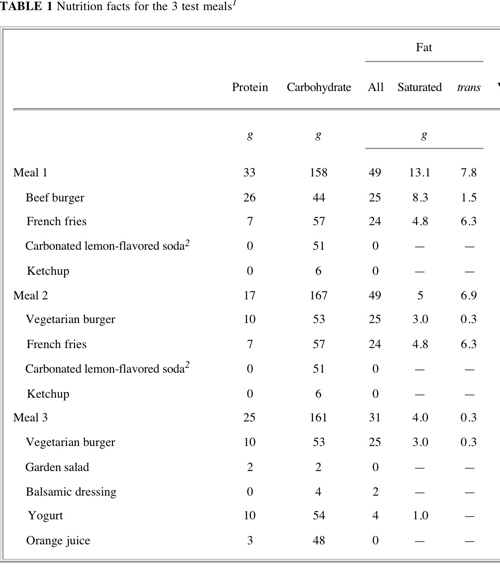 Despite differences in fat and saturated fat (which obviously were the only macronutrients these researchers figured would have an effect) note that the massive amount of carbohydrate is almost the same in all three meals. Knowing what you know about the physiological effect of carbohydrates, what would you expect the results of the FMD studies to be?
You are correct. The reduction in FMD was the same after all three meals.
The 160 or so grams of carb in these meals represents about 32 teaspoons of ‘sugar’ that has to be dealt with. Since a normal blood sugar is only one teaspoon of sugar dissolved in the blood, that means that these subjects had to dispose of 31 teaspoons of sugar fairly quickly. They did so by increasing their insulin levels, which drove the sugar into the cells, including the endothelial cells. In fact, the insulin hit the endothelial cells first because they line the arteries carrying the insulin through the body. And since insulin is a vasoactive hormone, one would expect a vascular reaction.
Plus, as I wrote before, eating is an inflammatory event just like breathing. We have to do both, but we pay the price. During inflammation the endothelial cells don’t function optimally. So getting rid of the huge load of carbohydrate and the accompanying inflammatory effect of the food (and, don’t forget, high glycemic carbs are the most inflammatory of all the macronutrients) inhibits the normal action of the endothelial cells. Anyone with half a brain and a rudimentary knowledge of the nutritional aspects of physiology would have predicted that the FMD would have declined about the same with all of these meals.
The only ones who didn’t realize this were the researchers who did this study. As they reported:

Against common expectations, a conventional beef burger meal and presumably healthier alternatives such as vegetarian burgers with or without vitamin-rich side orders did not differ significantly in their acute effects on vascular reactivity. [my italics]

Not against common expectations, but against the expectations of those steeped in the idea that fats in general and saturated fats in particular are bad while carbs are good.
What I find particularly satisfying about this study is that it provides ammunition to use against Dean Ornish and the rest of the knucklehead rabid low-fatters. For the last several years these guys have been parading around on the talk show and lecture circuit crowing that a single high-fat meal causes endothelial dysfunction based on a study (that I can’t lay my hands on right now because I’m in a hotel in Anaheim getting hurried to finish this up and take the grandkids to Disneyland (and believe me, I’d rather take a beating than spend the day at Disneyland, but, hey, I’m a doting grandfather)) showing that someone who ate a single hamburger meal had decreased FMD. I’ve countered by saying that it wasn’t the fat that caused the decreased FMD, but the overall meal and primarily the carbs. But I had no data to prove that until now.
I’m sure these folks in Hamburg figured that they would show that the ‘bad’ meal of a real beef burger would cause a substantial drop in FMD while the ‘good’ meals of veggie burgers would show a much lesser effect. Fooled them.
In the words of the old sixties song Where Have All the Flowers Gone