Edinburgh Castle at dusk just above our hotel.
We’re here in Edinburgh and have been for the past couple of days. But – as with this entire European trip – I’ve encountered internet access problems. Every hotel we’ve stayed in has advertised that it has wifi internet service. Problem is that half (or more) of the time the service is down or the service is only available in the lobby, which can be a real pain in the rear. In all the hotels in which we’ve stayed the internet service has cost anywhere from $18 to $30 per day.
The next time I come over here I’m going to make sure that the hotels I reserve have internet service in the room and for a reasonable fee. I didn’t know the right questions to ask this time. The last time we were here, we were in Prague, Budapest, and Vienna. The first two had great internet service in the rooms at a reasonable cost; I had a problem in Vienna, but we were in a crummy hotel, so I didn’t think much about it. We had nice hotels throughout this trip, and I’m really surprised that we’ve had so much trouble using the internet.
We leave tomorrow for the US. I don’t know that I will get all the comments that have stacked up since I last had access before I hit the rack. We’ve got to be out of here at a little before 6 AM tomorrow and it’s now about 10:30 PM. I’ll have plenty of time in the airport lounge tomorrow before the flight (and, presumably, I’ll have internet service) to catch up.
MD and I stopped for a glass of cider in a pub today called Doctors located close to the medical school. On the wall was the menu board below. 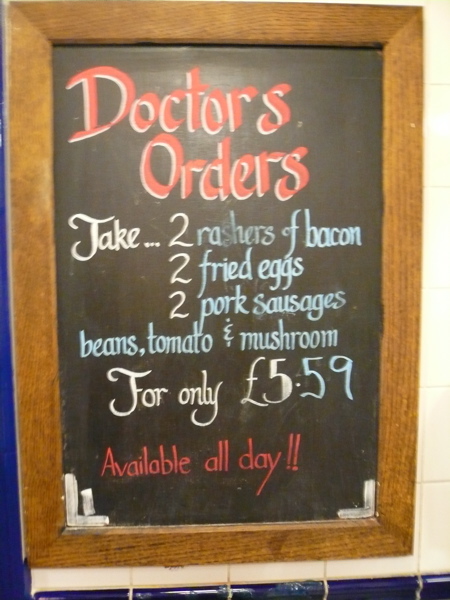 It’s too bad more doctors don’t order similar diets for their patients (sans the beans, of course). If they did, there would be a lot less disease going around.
MD and I have eaten breakfast every day we’ve been here at a pub near our hotel where we’ve been served pretty much the same breakfast. 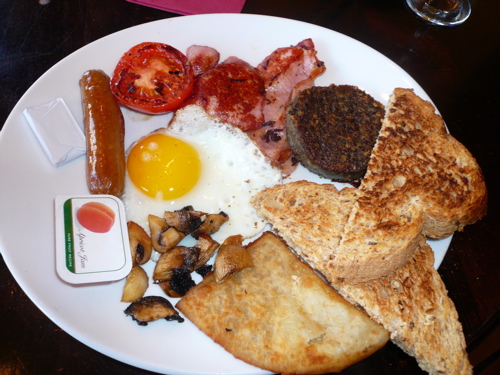 As you can see, it’s easy to stick to a low-carb diet in Edinburgh just as it was in Italy. Here you can see our daily breakfast. Eggs, sausage, ham, mushrooms, grilled tomato, and haggis, which is the brown stuff on the right that looks in the photo kind of like a hamburger patty. We of course eschewed the bread and the nasty stuff to the left of the bread, which is the Scotch version of hashbrowns. We tried a bite, and it’s every bit as disgusting as it looks.
We’re in the air all day tomorrow. A flight on Continental to Newark, a three-hour layover, then a long flight to LAX. Once home and in the possession of reliable internet service, I should be back to my regular posting schedule in short order. I’ve read a number of pretty interesting papers on my travels that I’m eager to dissect and discuss.  And while in Munich, MD and I spent a day at Dauchau, the first Nazi concentration camp and the model for all the others.  After some time in reflection I’ll share my thoughts on this sobering experience along with some photos.