A few days ago Chef Michael Schwartz, formerly of Le Cirque and Osteria del Circo, agreed to test the cooking properties of a several fats that will be used to replace trans fats once the New York City ban takes place. Mr. Schwartz test, set up at the Institute of Culinary Education where he is an instructor, compared Crisco, coconut oil, peanut oil, canola oil, butter and lard in the cooking of an apple tart, fried chicken and French fries.

Part of the test was to see if Crisco — the only ingredient he was using whose trans fat content exceeds what will be allowed under the new rules — produced a better result in taste, texture or appearance than the other oils and shortenings. The other objective was to find the best trans fat alternative for each dish.

Mr. Schwartz chose Crisco, butter and coconut oil, which is higher in saturated fat than butter, as the three competing ingredients in his apple tarts. “I can tell you in advance, the Crisco will make a flakier crust,” he said, before removing them from the oven.

He was right. The slightly browned pastry crust made with Crisco was light, flaky and beckoning. By contrast, the tart made with butter had a flatter, firmer and less appealing crust; the one made with coconut oil appeared lumpy, and crumbled under a knife.

Still, when it came to taste, according to a highly unscientific test by Mr. Schwartz and this reporter, the tart made with coconut oil was the best.

Based on Mr. Schwartz’s experiments, it appears that trans fat-laden Crisco is the best shortening available to make foods crispy and flaky, especially pastries. As we all know, appearance can actually make a difference in how things taste. Big, flaky pastries and crisp French fries are always going to seem to taste better to the average Joe irrespective of what a trained chef has to say about it. 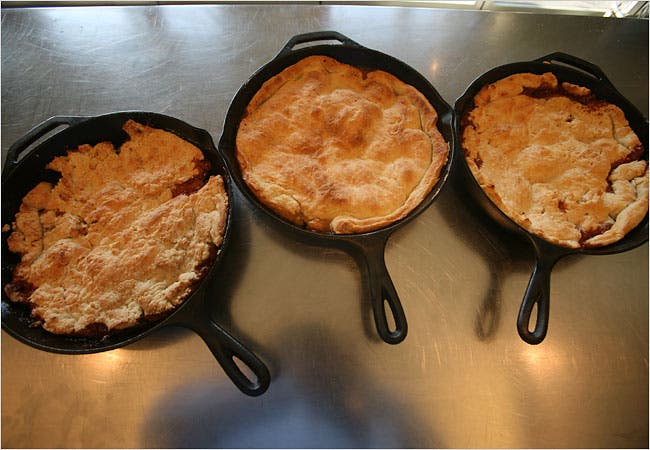 Take a look at the three tarts pictured above. The one on the left made with Crisco looks the best by a long shot–more crumbly and flaky–even though the chef deemed the tart made with coconut oil on the right to taste better, (the middle one was made with butter) I would bet that the the average person given the same test would pick the Crisco-made tart.

It will be fairly easy for restaurants and bakeries in New York to create tastier foods; it’s going to be tough for them to create foods that look good without using trans fats. 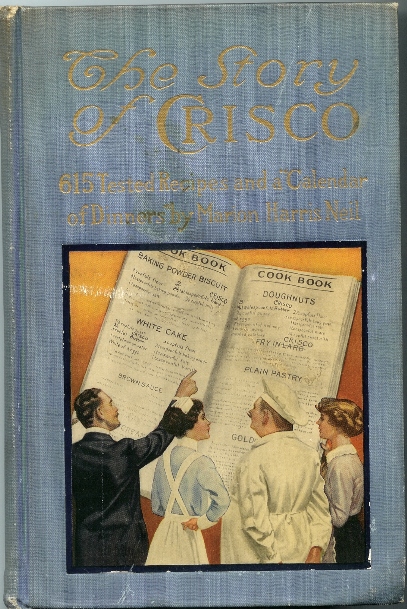 This little book was distributed far and wide to cooks and housewives all over the country in an effort to get them to switch from butter and lard.

Here are scans of a few pages just so you can get the feel for the sales job put on these folks. 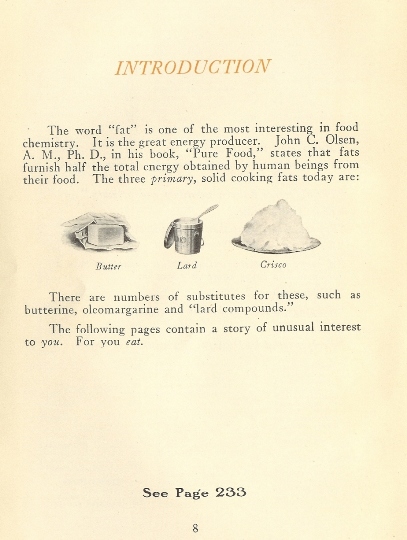 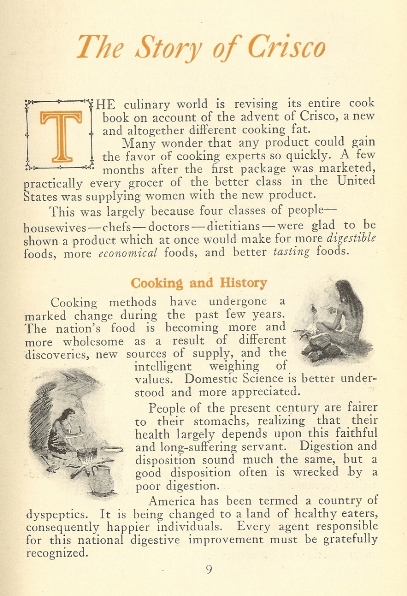 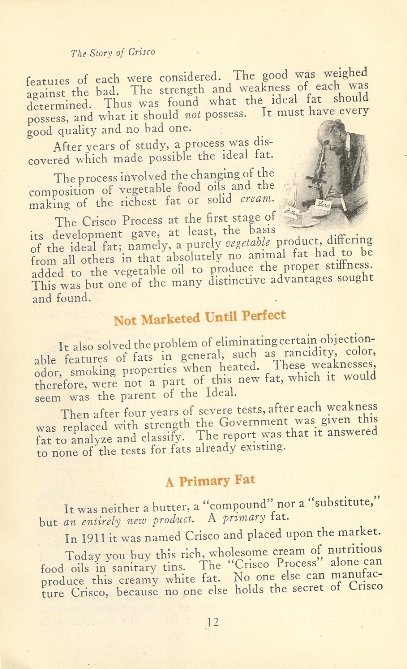 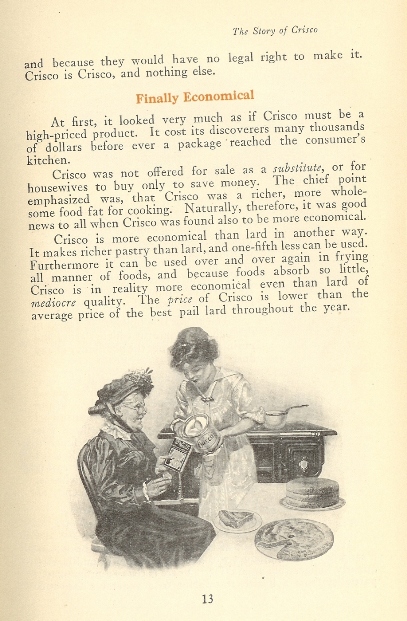 A few of my favorite lines are from pages a little further in the book that I didn’t scan this time around. Maybe later if there is interest.

It was the aim of the makers of Crisco to produce a strictly vegetable product without adding lard and consequently indigestible animal fat. There is today a pronounced partiality from a health standpoint to a vegetable fat, and the lardy, greasy taste of food resulting from the use of animal fat never has been in such disfavor as during the past few years.

So Crisco is absolutely all vegetable. No stearine, animal or vegetable is added. It possesses no taste nor odor save the delightful and characteristic aroma which identifies Crisco, and is suggestive of its purity.
When the dainty shadings of taste are over-shadowed by a “lardy” flavor, the true taste of the food itself is lost. We miss the “hidden” or natural taste of the food. Crisco has a peculiar power of bringing our the very best in food flavors. Even the simplest foods are allowed a delicacy of flavor.

Makes me almost want to go out and go face down in some.

I’ve always said the the perfect food for the horrendous typical American diet would be a ball of trans fat sweetened with high-fructose corn syrup. Well, the folks at Proctor and Gamble beat me to it. Way back in 1913 they offered up a recipe in their little book for a delicacy called Crisco Drops. Although made with a syrup of pure sugar heated until liquefied, it’s not far from HFCS. 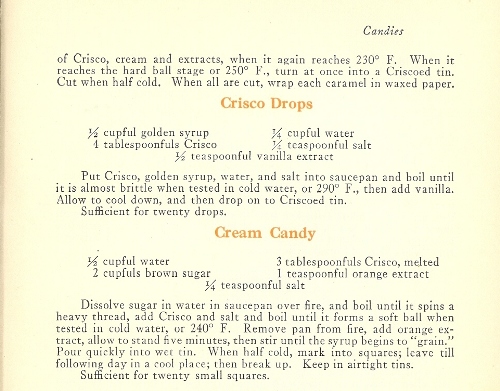 Mmm, Mmm. I can almost feel my arteries hardening just reading the recipes.