Cholesterol and heart disease: no correlation

I just ran across a video of Dr. Malcolm Kendrick discussing the lack of correlation between cholesterol levels in the blood and heart disease. As 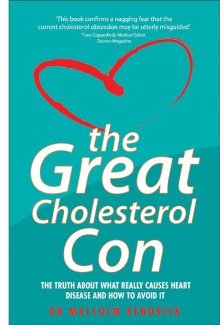 you may remember I reviewed Dr. Kendrick’s book The Great Cholesterol Con in a previous post. His book is by far and away the better of the two books out there with the same title. Dr. Kendrick has a wealth of experience from which to draw and writes in a clever, witty and easily readable style. If you’re still worried that cholesterol may be the cause of heart disease, you need to read this book.
When I reviewed this book earlier, it took several weeks to get. Now the books are available from Amazon.com and can be had quickly. Add it to your low-carb library.
One caveat about the video. Despite how compelling the data are, they still come from observational studies, and, as such, can’t really be used to prove causation or lack thereof. The reason for this video is that so many people have tried to prove that cholesterol causes heart disease with the use of observational studies, it’s nice to see one that clearly shows the opposite.
Here is the YouTube link.