Are carbohydrates really fattening?  This one question has generated much acrimonious debate over the years.  Some believe all that matters is the caloric content of food while others (yours truly, for instance) believe more is at play than simply the number of calories available.  A recent study published in the New England Journal of Medicine (NEJM) provides some evidence that carbohydrates are indeed more fattening than fat or protein. 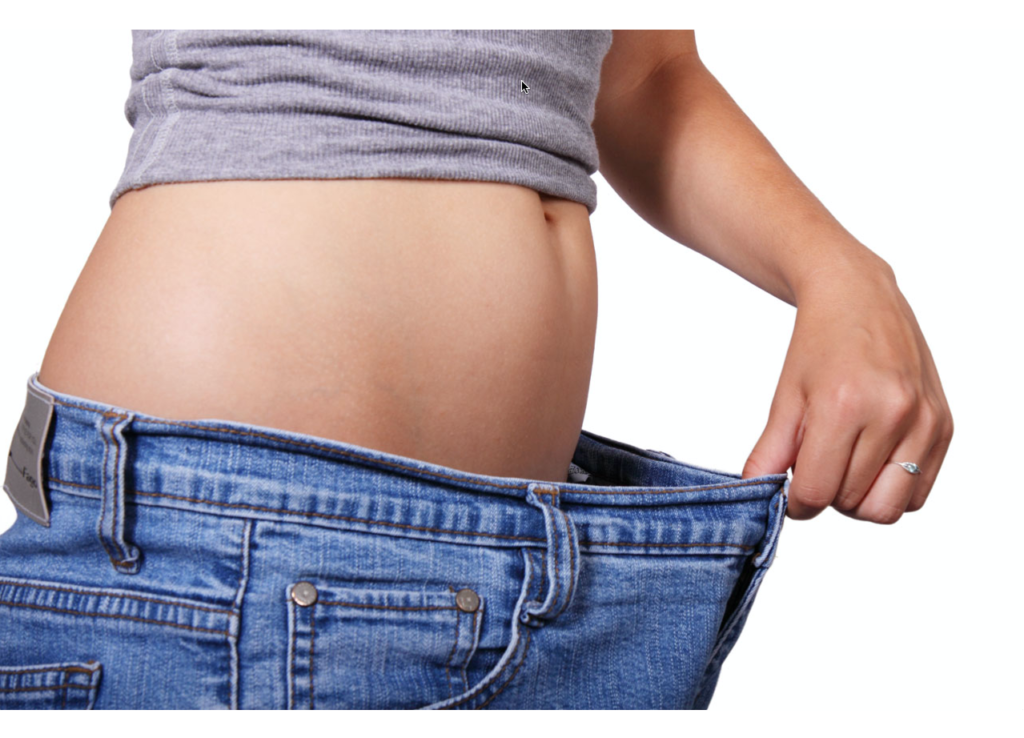 Many years ago, I was taking questions after giving a presentation to a large group of both doctors and laymen.  A lady stood up and told me she always lost weight whenever she went on a low-carbohydrate diet, but she also always gained it back more quickly after going off such a diet than she did when she regained weight she had lost on a low-fat diet.

As I listened to her question, my brain was busily formatting a smart-assed answer along the lines of, Well, that’s God’s way of telling you not to go off of your low-carb diet.

But, looking out over the audience, I noticed a lot of heads nodding in agreement.  I realized I needed a reasonable answer.

The truth was, I didn’t really think there was anything to it.  I figured it was all in her imagination.  I had heard such reports before, and I didn’t think much of them.  But as I saw heads nodding throughout the auditorium, it reminded me of the old maxim that one report is anecdotal, but many similar anecdotes become data.

So, I thought about it quickly and concocted and answer on the spot.  Most public speakers know the surest way to embarrassment is to engage in original thinking while in a public forum.  Though I was in peril, I think in this case I came out okay.

I’ll go through my thought processes, as I remember them well.

My bias was/is that carbohydrates are vastly more fattening than the same number of fat or protein calories, so let’s assume that at the start.

A low-carb diet restricts carbohydrates, and so restricts the most fattening of the three macronutrients.

If my assumption is true, then people on low-carb diets should lose more weight faster, which the majority of studies shows to be the case.

A low-fat diet restricts fat and secondarily protein, because most forms of high-quality protein contain fat.  Both fat and protein are less fattening per kcal than carbohydrate.  If this assumption is true, then people on low-fat diets that restrict fat and/or protein should lose less weight and lose it more slowly, which a majority of studies shows to be the case.

How does one cheat or go off a low-fat diet? By eating more fat and/or protein.

How does one cheat or go off a low-carb diet? By eating more carbohydrate.

Ergo, in going off of a low-carb diet one would pack on pounds more quickly as compared to going off a low-fat diet.

Seemed to make sense to me at the time, and it made sense to the audience.

I’ve thought about it a lot since then and have concluded that my on-the-spot thinking was probably correct.  And I’ve used it since whenever asked the question.

But unlike the numerous studies showing the low-carb diet to be quicker and more effective for weight loss, there have been no studies (at least not that I’ve seen) showing that people who go off of low-carb diets regain faster.

A recent paper in the NEJM looked at what happens over the four years after subjects go off of different kinds of diets.

Subjects were studied on one of three diets over a two-year period.  One group went low-carb, another low-fat and a third group followed a Mediterranean diet.  The original two-year study, published in 2008, clearly showed the obvious advantage of a low-carb diet.  But, at the time, the media kept misrepresenting what the study really showed, so I corrected the record here and here.

After completion of the study, the researchers kept in touch with 95 percent of the subjects and were able to gather data from them four years after the end of the original two-year study.

You can see from the charts below (click to enlarge) the outcome of several parameters. 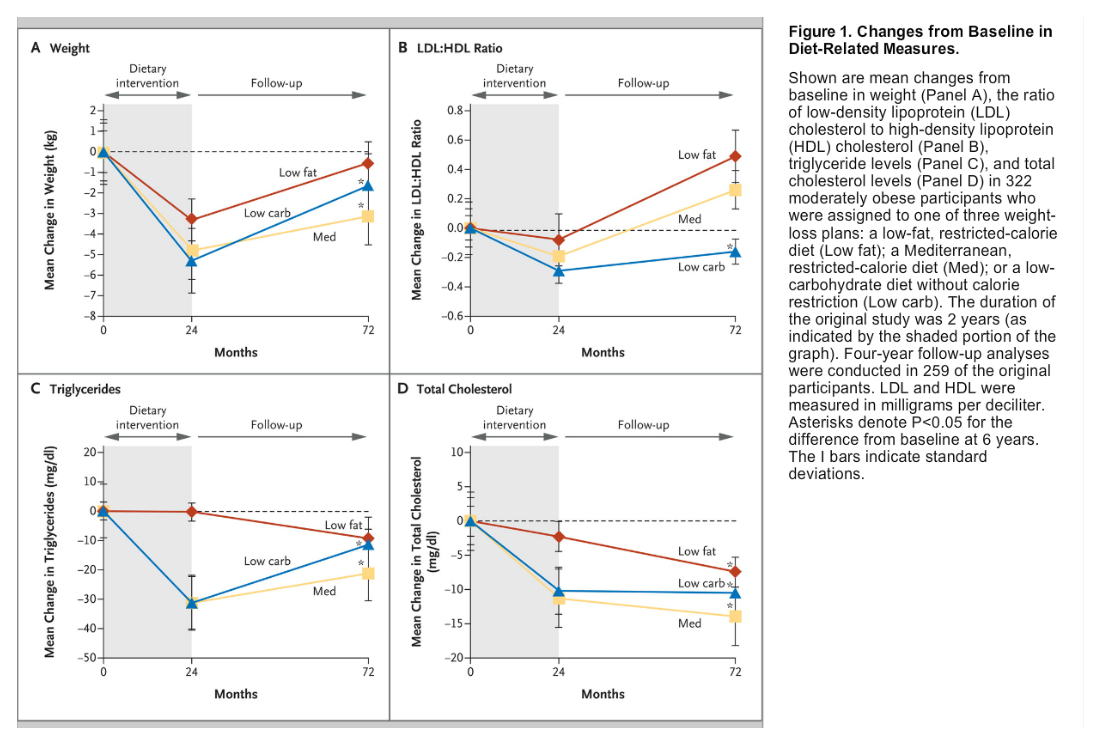 First, in Chart A, you can see that the low-carbers both lost the most weight in the first study then regained the most, which provides some evidence in support of the notion that carbs are more fattening than fat and/or protein.

The study gets really interesting when you start looking at what happens to lipid levels when people go off of either low-fat or a low-carb diets.

Why did this happen?

As far as I know, no one knows.

But it would seem that two years on a low-carb diet appears to confer some protection against increases in the LDL/HDL ratio despite the increase in carb intake.  And this protection lasts at least four years.

And Chart D shows that reductions in total cholesterol brought about by low-carb dieting seem to be maintained despite the increase in carb intake after the end of the two year study.  Once again, it appears that restricting carbs for a couple of years provides some protection for at least the next four.

So what does it all mean?

And it’s pretty clear that going off the low-carb diet will result in more weight gain than going off of a low-fat diet.  Which would have to at least imply that carbohydrates are more fattening than are fat and protein.  We can see from the length of this second follow-up – four years – we’re not talking about the immediate water gain that comes from going off a low-carb diet for just a few days, but the long-term weight gain.

I have to issue my standard caveat here.  This is a single study.  I don’t know of any others like it.  So, repeat after me, we can’t draw certain conclusions from a single study like this.  Other studies may come along and show differing results.

But having said that, this study along with the enormous mass of anecdotal data seems to indicate that weight gain is more rapid after bolting from a low-carb diet as compared to straying from a low-fat diet.

If this proves to be true, then it really is indicative that carbohydrates are more fattening than fat or protein.

I would love to learn of your experiences in going off various kinds of diets.  Did you gain more after a low-carb diet or after a low-fat diet?  Let me hear from you in the comments.