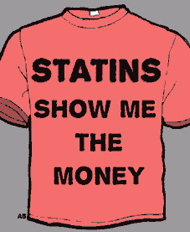 After the Enhance study came out Katie Couric interviewed Dr. Steve Nissen, a statinator of renown.
Although Dr. Nissen, who is the Chairman of Cardiology at the Cleveland Clinic, is upset over the findings of the Enhance study, it hasn’t dimmed his enthusiasm for statin drugs a whit. As you watch the video, note the quotes I’ve excerpted. They demonstrate how a famous cardiologist is firmly in the grip of the lipid hypothesis despite considerable evidence that the hypothesis has been built on a very shaky foundation.
Here is the video.
[youtube]KLMnpgVBpJg[/youtube]
Here are the excerpts:

In all the historical studies, the more you lower cholesterol, the better the outcome.

Really? What about those studies showing that very low cholesterol levels are associated with violent behavior, violent death, suicide and an increased incidence of cancer?

We have to find the right way to lower cholesterol.

Why? Where is the evidence that an elevated cholesterol does squat?

We know that lowering cholesterol with statins is highly effective at preventing heart attacks and strokes.

Do we really know that the cholesterol-lowering effects of statins reduce heart attack and stroke? Or is it something else? And since the data show that there isn’t really a reduction in all-cause mortality, aren’t we simply trading death by heart disease for death by some other cause, including side effects from the drugs?

For the moment we’ve got to stick with what we know works, and that’s the statins.

One wonders what Dr. Nissen considers a healthy diet? (Note to grammarians: there is no such thing as a healthy diet. He means a healthful diet.) I doubt that he means a healthful diet as would be described by most readers of this blog. How many comments have we seen come through this blog from people who are young, in good health and have as their only lab abnormality an elevated total cholesterol who report that their doctors want them to go on statins? Are these the patients Dr. Nissen thinks have “sufficient risk”? Or does he think a total cholesterol of 210 mg/dl is a sufficient risk all by itself. I would suspect the latter. And if these patients stick with statins for the “long term” at a cost of many thousands of dollars over their lifetimes won’t they – as the data show – simply be trading their risk for heart disease and stroke for something else? Is it a worthwhile trade? The overall mortality results don’t appear to demonstrate so.
But a good statinator doesn’t let these kinds of things get him/her down. He/she simply continues to statinate without regard for the long term consequences. Which can be considerable as is shown in a new blog by Dave Dixon, one of the long-time readers of this blog. Dave’s post points out the enormous number of deaths that are caused by physician prescribed drugs.

An article in Newsweek put this into perspective. Adverse drug reactions, from “properly” prescribed drugs, are the fourth leading cause of death in the United States. According to this article, only heart disease, cancer, and stroke kill more Americans than drugs prescribed by medical doctors. Reactions to prescription drugs kill more than twice as many Americans as HIV/AIDS or suicide. Fewer die from accidents or diabetes than adverse drug reactions. It is important to point out the limitations of this study. It did not include outpatients, cases of malpractice, or instances where the drugs were not taken as directed.

And in the video above, did you note Katie saying that right now cholesterol levels are at their lowest levels ever in this country? And Dr. Nissen agreeing? If so, and if cholesterol really causes heart disease, why hasn’t the incidence of heart disease fallen in lock step? And why does Dr. Nissen maintain his belief in the lipid hypothesis?
Makes one wonder.
(Hat tip to the Alliance for Human Research Protection blog for T-shirt graphic)