Truth versus hype in the Jupiter study 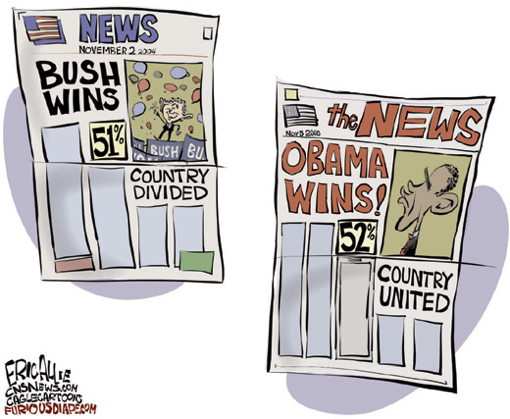 The point of the cartoon above by Eric Allie holds true for the recently released Jupiter study: the reporting of the data by the media often overshadows the actual data.

Let’s first take a look at the reporting.

The lede from MSNBC:

People with low cholesterol and no big risk for heart disease dramatically lowered their chances of dying or having a heart attack if they took the cholesterol pill Crestor, a large study found.

The headline from Fox News:

The New York Times headline and lede (on the front page, no less):

Cholesterol-Fighting Drugs Show Wider Benefit
A large new study suggests that millions more people could benefit from taking the cholesterol-lowering drugs known as statins, even if they have low cholesterol, because the drugs can significantly lower their risk of heart attacks, strokes and death.

I could go on, but you get the picture.  I’m sure you’ve read all this in your own papers.  But it’s not just the papers and media that are harping on this study – it s even the statinators themselves.

Here is the commentary from Steven Nissen, M.D., a Master Statinator if there ever was one:

The extent of reduction in death, heart attacks, and stroke is larger than we’ve seen in any trial I can remember. I don’t know how you get much bigger than that.

[The findings] really change what we are going to do in the future. This targets a patient group that normally would not be screened or treated to prevent cardiovascular disease.

And in a statement that I’m sure will prove true, Dr. Weaver follows up with:

This will become an important part of the armamentarium of the primary care doctor. I see this as being part of that panel of preventions that they will be applying in men over 50 and women over 60.

Dr. Tim Garder, president of the American Heart Association, opines without any evidence whatsoever that

This is likely to be a class effect, not a specific drug effect.  This is a win for all statins, I would say.

The above is a sampling of the reporting and the blathering so far about the Jupiter study.  The general impression that most people (and, sadly, most physicians) will take away is that statins will prevent heart disease even in those people who don’t have risk factors for heart disease. Any one of any sex at any age should queue up for a dose of statins to prevent heart disease.

That’s the reporting.  Now for the data. What does the study actually show?

If you believe the data from this study (we’ll get to that later), it indicates that men over 50 and women over 60 with normal LDL-cholesterol levels AND elevated C-reactive protein levels who took the very expensive ($3.50 per day) statin drug rosuvastatin (Crestor) minimally reduced their risk of developing heart disease or dying of any cause as compared to those who took placebo.

That’s it, folks. And that’s only if you believe the data.

So, what’s the big deal?

Well, the big deal is that there is finally a study that shows some benefit to statin drugs in terms of decreasing all-cause mortality. And, as I’ve posted before, those studies are few and far between.

There is so much excitement on the part of the statinators of renown because their coffers will soon be filled to overflowing with fees from AstroZeneca (and other statin manufacturers that want to piggyback onto this study) for speaking gigs promoting Crestor. (Here is a post on the payola to doctors promoting anti-depressant drugs. Drug company income from anti-depressant drugs is a drop in the bucket compared to the income from statins, so you can only imagine how lucrative it is to be a speaking statinator.) There is considerable excitement at AstroZeneca and the other statin makers because the physicians who are non-critical thinkers and non-study readers (sadly, the vast majority) will commence giving statins to just about everyone who walks through their office doors.

It appears to be another modern medical triumph – everyone profits but the patients.  Looks like Erasmus was way ahead of his time when he wrote about Jupiter way back in the 14th century.

Jupiter, not wanting man’s life to be wholly gloomy and grim, has bestowed far more passion than reason /you could reckon the ration as twenty-four to one.

Passion to reason in the ratio of 24 to 1.  That equation certainly applies to the media covering this study and the statinators feeding them their info.

Let’s take a look at what the study really shows.  But before we do, let’s psychoanalyze the people putting the study together.  What do you think they wanted out of this study.

But what about the Jupiter study? Know what Jupiter stands for?  It stands for Justification for the Use of Statins in Prevention: an Intervention Trial Evaluating Rosuvastatin.  Which translates to by God we’re going to prove that statins prevent something.  We certainly know the mindsets of the people running this study.

After a couple of critical reads of this paper (full text here), I can’t see a real problem with the data.  But there are a few sort of fishy things going on with this study and three really fishy things.  Before you read on, give a quick read through to a post I wrote a while back about relative risk so that you will be familiar with the kinds of statistics we’ll be talking about.

Although the relative risk numbers in this study appear to be correct, you’ve got to realize that these are small numbers we are talking about.  Out of almost 18,000 subjects there is a difference of not quite 50 deaths between the two groups during the years over which the study took place.  Which means, of course, that neither subjects in the placebo group nor subjects in the Crestor group were at great risk of dying.  There is a difference, but in these small numbers (as explained in the post linked above) it is almost meaningless.

You can really see the difference when you look at this graph taken from the study. 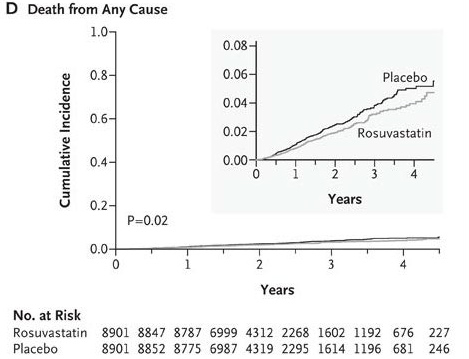 Notice the bottom two curves.  Those are the all-cause deaths from the placebo and Crestor groups.  As you can see, the two curves are pretty much superimposed upon one another.  That’s what it looks like when very small numbers are involved.  The authors had to use a different scale to make it look like there was a major difference as they did in the two divergent curves at the top of this chart.

Let’s look at the sort of fishy aspects of this study.  First, the patient population is most unusual.  How many subjects are there out there who have both normal LDL-cholesterol levels (defined as 130 mg/dl or below) AND elevated C-reactive protein levels.  Not very many.  Especially if you eliminate anyone with any history of inflammatory disorders, which the researchers did.

Most people who have an inflammation arising from the metabolic syndrome, obesity or other common inflammatory disorders will have both elevated lipids AND elevated C-reactive protein levels.  They are typically found together.  The authors of this study had to use 1315 sites in 26 different countries to get the 17,802 subjects involved.  Simple division tells us that there were an average of about 13 subjects per center.  Not many.  To paraphrase F. Scott Fitzgerald who said “the rich are different from you and me.”  Well, these subjects are different from you and me.  And what may work for them may not necessarily work for you and me.

Second, when you look at Table 1 showing the baseline characteristics of the participants, you can see that in virtually all respects the two groups of subjects look identical, which is as it should be in a randomized study.

Third, looking at this same table and checking the very next category, Metabolic Syndrome, we find that 71 more patients in the placebo group with metabolic syndrome than we do in the Crestor group.  Since the metabolic syndrome is another strong risk factor for development of CHD, do you think some of that difference in deaths could have come from this disparity in the groups?  As I say, not conclusive, but fishy.

The three real fishy things are more problematic. First, according to the paper

At the time the study was terminated, 75% of the participants were taking their study pills.

Which means, of course, that 25% weren’t taking their study pills.  And we don’t really know how many of the deaths in the study group came from the 75% taking their meds or the 25% who weren’t because the data was evaluated using an intention-to-treat analysis.

Finally, the fishiest thing of all.

They stopped the study right in the middle of it.  When studies are done that might put people at risk by giving them potentially dangerous drugs, it is typical for an outside group to take a peek at the data at certain milestones to make sure the study medication isn’t killing people.  When this data is evaluated, and it is found that subjects on the experimental medicine are dying at unacceptably high rates, the study is often halted.  I’ve never seen a study halted because the placebo group was dying at higher rates. That really makes me wonder.

One of the negative findings in this study was that the group on Crestor developed diabetes during the trial at a significantly higher rate than did those on placebo.  I suspect that the outside group checked the progress of the study, found that the subjects on Crestor were at the time of the evaluation showing better results than those on placebo, so the decision was made to stop the study while it was looking good.  Had it gone on for the full term, the deaths could have evened out, way more people could have developed diabetes, or who knows what might have occurred had the study continued.  So, the powers that be decided to quit while ahead.

But, let’s assume I’m taking this study at its absolute worst.  Let’s look at it in the best light possible.  If we do, we find that a small group of unusual patients – those with low LDL-cholesterol AND high C-reactive protein – may slightly decrease their risk for all-cause mortality by taking a drug that costs them almost $1,300 per year and slightly increases their risk for developing diabetes.  That’s the best spin possible given the data from this study.  Compare that to the spin the media is giving it.