Over the past week I’ve stumbled into some weird articles and bizarre sites on the web that I stuck up on my Firefox browser tabs thinking that I might post on them at some point. In going through them tonight it dawned on me that no single one of them is worthy of a post on its own, but in aggregate they might make for fun looking for any of you out there who are as strange as I am.
None of the following sites and/or videos is nutritionally related, so if you’re here solely for that, you better click on by. But if your up for some different stuff that you may not have seen, stick around. I can’t promise you that it will be totally uplifting, although some of it is, but I can promise you that it will be something you might not have run into during the course of your normal week.
If I get enough positive response on this, I’ll continue it. It seems that I run into no end of strange, but interesting, stuff that I’ll be more than happy to share.
First, for those of you who are dedicated meat eaters, here’s something that you probably can’t live without: a bacon wallet. (Disclaimer: I have no financial involvement with any sites or products appearing in this post.) Order here. 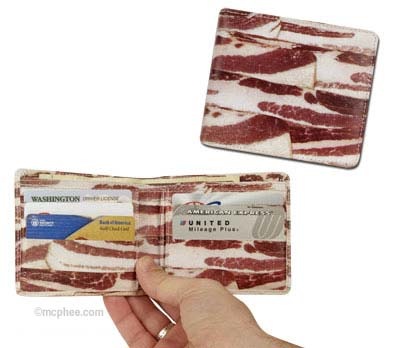 Here’s a guy with way too much time on his hands. I’ve looked at the pictures of these models at least 20 times, and I still can’t get enough of them. And I’m not even a model freak (or haven’t been since I was a kid gluing together model airplanes.) The detail work on this is phenomenal. Each one of these German soldiers is about a foot tall, and all are custom made and sport custom-made uniforms. Look at the entire collection of pictures. When the poor guy who made all these (he’s shown in the last picture on the site) goes on to his reward, his heirs will probably put it all out in a garage sale. (Link) 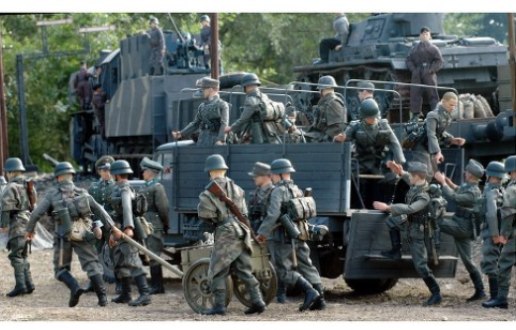 Here is a video that sent MD screaming from the room. I don’t know what the occasion was or any details of the situation, but this is one hair raisingly creepy video. Apparently a bunch of people in India (for all I know it’s an everyday occurrence) placed a baby out on a rug to play with a live cobra. According to the commentary on the video, the cobra has had its mouth sewn shut. Maybe some readers will know the deal here and enlighten us all. DO NOT WATCH IF YOU ARE AFRAID OF SNAKES, COBRAS IN PARTICULAR.
[youtube]sDlHS0JX-XE[/youtube]
Now that we’re beyond that, let’s look at something truly wonderful. I can’t believe this guy can do this. MD and I have watched this video several times in amazement. Enjoy. (Link for larger screen video and website)
[youtube]TIvldN5fM4s[/youtube]
(Hat tip to Frank DiTullio for sending me this video)
Here was one of my highlights of the last week: Christopher Hitchens deflating the gasbag Sean Hannity. I can’t stand Sean Hannity. Even when I agree with him he drives me over the edge. So much so that I can’t bear to watch him. I loathe him and those like him who think no one else can have a legitimate opinion if it doesn’t with theirs. Hannity talks over his guests, won’t let them finish their answers, uses absurd reasoning, and, in short, is a bully. He’s got a daily radio show and a daily TV show that keeps him on the attack. He’s used to it. He thrives on it. These poor people come on his show trying to express an honest opinion, and he goes for their throats. He’s on the air a couple of hours every day; his guests are on air maybe a couple of times every now and then or in some cases almost never. It’s not a fair fight.
Whether you’re a fan of Christopher Hitchens or not, you’ve got to like the way he handles Hannity. Watch all the air go out of ol’ Sean when Hitch hits him with the remark about his (Sean’s) long unlettered question. I’ve never seen Hannity speechless.
I kind of agree with Sean that irrespective of how you might feel about Jerry Falwell or anyone else it’s in kind of poor taste to attack the recently deceased before they’re even in the grave. But Hitchen’s is out promoting an anti-religious book, and Jerry Falwell’s death during the book tour handed Hitchens a golden opportunity to get on every talk show in America. I’m not so sure that if I were out promoting a new low-carb book and Dean Ornish pitched over with a heart attack that I wouldn’t do the same thing. I’m pretty sure Dean would should I so succumb.  (Here’s the link to the full episode.)
[youtube]ryGmyMprmKM[/youtube]
Last week in Alabama an 11-year-old kid brought down the world’s largest wild boar with a pistol. Prior to this Hogzilla was the biggest. This one – Hogzilla II? – wins by a nose and a tail and a few other body parts. Looking at the picture makes you not want to go walking alone in those parts. I would hate to come upon this guy unexpectedly. The father of this young man hasn’t wasted any time in exploiting his kid’s adventure. Here’s the website dear old dad got up in a heartbeat. Warning: it takes forever to download, or at least it did when I tried it. Maybe dad has gotten someone to contribute for a faster server by now. (Article about the hog) 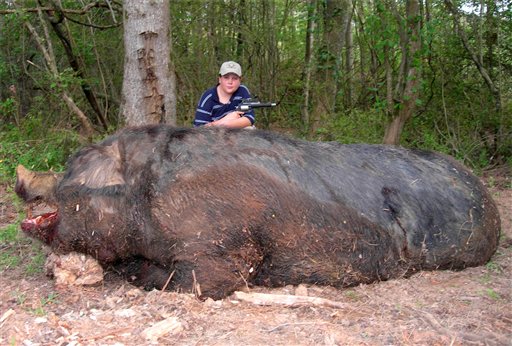