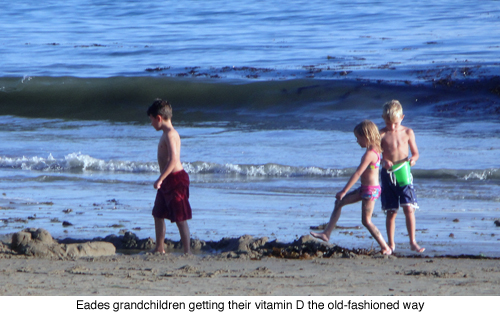 MD and I just got back from yet another cross-country trip, which gave me the opportunity to catch up on my reading.  While reading a golf magazine, of all things, I came across an article that demonstrates why all such articles should be taken with a grain of salt.  I can’t tell you how many letters MD and I get from people who become concerned because they read a piece in a magazine or newspaper that, for whatever reason, got under their skin.  So, I thought dissecting this article like I did a while back with a scientific study would be instructive.
Before taking these kinds of pieces seriously, you’ve got to realize how they are structured.  And believe me, they are as structured as a sonnet.
Freelance writers are always trying to get their pieces sold, and they write them to a formula that most magazines demand, which is why most of them are pretty much the same.  Just switch the experts and the subjects and you’ve got an article on most anything.  Magazine editors give writers assignments often telling them what they want the article to say and how many words they want it said in.  The writer’s job is to follow the format, cram the info into the required number of words and sound authoritative.
Your job as a reader is to realize this structure and plumb it for any valid info while not being distracted by the authorial sleight of hand.
This particular article, appearing in the July 2009 edition of Golf Digest, is cleverly titled “The vitamin D-bate,” and was written by an author with the initials RK.  I’m not trying to hide the name of the author to prevent embarrassing him or her – that’s how the author was listed at the end of the article
These pieces typically hew to the following format: they start with a lede that poses a dilemma followed by an introductory paragraph or two expanding upon the problem; they then have a statement from one ‘expert’ followed by a dissenting statement by another ‘expert;’ then they neatly tie the whole thing up with a pronouncement by the ultimate ‘expert’ who sagely answers the question posed in the lede.  All neat and tidy – and typically wrong.  In the case of the article under discussion, not only wrong, but breathtakingly stupid.
The lede for The vitamin D-bate is the subtitle of the piece.

Sun exposure is a source, but how much is necessary to stay healthy?

Since most golfers spend a fair amount of time in the sun, this should be of interest to them.  So, let’s read on to see how much vitamin D we really need.
After the lede we get the introductory paragraph.

In the vitamin world, D has become a rock star of late, with some experts claiming it might protect against cancer and reduce high blood pressure.  And we already know it’s essential for maintaining bone density and a functioning immune system.

Okay, articles are popping up all over about the benefits of vitamin D, and we’re convinced of its importance.  So how do we get it?
RK turns to the first ‘expert’ for advice.

It’s such an important vitamin that in May, the Skin Cancer Foundation doubled the recommended minimum daily intake from 10 micrograms to 25 (or 1,000 iu) for anyone younger than 50 who has limited sun exposure (including those who always wear sunscreen to protect their skin against the sun’s harmful rays). Ideally, the SCF says, people 18 or older should get up to 50 micrograms [2000 IU] per day.
Although the sun’s ultraviolet B rays help the body synthesize vitamin D, the SCF insists that the sun is not necessary to obtain sufficient amounts.  It suggests getting vitamin D from supplements and food such as milk, yogurt, egg yolks and oily fish (salmon, mackerel, cod).

At this point we need to ask ourselves ‘what is the expertise of the Skin Cancer Foundation?’  If we go to the SCF website, we discover that this foundation has been around for about 30 years and is underwritten by the cosmetics and skin care product companies.  Hmmm.  Maybe not the most reliable ‘experts’ on vitamin D.
But our freelancer has the needed quote to set up the debate.  Now RK decides to call the Vitamin D Council to come down on the opposite side of the debate. (The vitamin D Council really is the expert in this debate.) To get the debate going, however, RK needs to ask something provocative of whomever he speaks to at the Vitamin D Council. If this spokesperson tells RK essentially the same thing that the spokesperson from the SCF did, then there is no debate.  So, RK has to ask the right question to get the needed quote.
RK probably tees the question up much like this: I’ve been told by others that sun exposure isn’t necessary and that all one has to do to get enough vitamin D is to take a daily multivitamin and drink plenty of milk.  Is this true?
Of course the Vitamin D Council spokesperson is going to heartily disagree (and rightfully so) because it takes much more than that if there is no sun exposure.  (The Vitamin D Council recommends somewhere in the neighborhood of 5,000 IU per day, followed up with blood tests for levels.)  Now RK has the other side of the debate because the Vitamin D Council obliges.

However, the Vitamin D Council disagrees: “If one regularly avoids sunlight exposure…to obtain this amount from milk, one would have to drink 50 glasses.  With a multivitamin, more than 10 tablets would be necessary.  Neither is advisable.”

MD and I have played this little game countless times with freelancers.  So much so, in fact, that we’re really reluctant to speak with them because we never know where we’re going to end up in the article.  Usually the interviews are 20-30 minutes long, and end up with one sentence being quoted, and often quoted out of context.  I imagine RK spoke with someone from the Vitamin D Council for that much time, if not longer.  And used this one short quote.
RK really had to work to make this a debate to follow the format. The SCF spokesperson said that people who got little sun exposure needed to take supplements, and, in fact, recommended that ideally people should get up to 2,000 IU per day, which is way more than any daily multivitamin contains.  So, the SCF and the Vitamin D Council are more in agreement than they are apart, but RK has selectively quoted to make it seem like a disagreement.
Now, following the format, RK has to bring in a moderator and give us the final answer we’ve all been waiting for.

So, what should you believe?

According to dermatologist Michael Kaminer, who treats hundreds of patients with skin cancer annually, the best thing to do is find a middle ground.

“During long, dark winters where we are covered in clothes, I take vitamin D supplements,” says Kaminer. “But in the summer, grease up with sunscreen, drink some milk, and hit the golf course! You’ll be swimming in vitamin D.”

Oh, really?
I told you it was breathtakingly stupid.
Does this guy understand that ultraviolet B (UVB) rays are what both make vitamin D and burn the skin?  If you put on sunscreen that blocks UVB, then you block the production of vitamin D.  Pretty much completely. Even weak sunscreens with an SPF of 8 block 95 percent of vitamin D synthesis.  So greasing up with sunscreen is definitely not going to have you “swimming in vitamin D.”
In fact, if you’re not careful, you’ll end up more prone to the worst kind of skin cancer: melanoma.  Why?  Because a sunburn is nature’s way of telling you you’re getting too much sun.  Unless you’re a moron, you get out of the sun before you get badly burned.  With graduated sun exposure you develop a tan, which prevents burning because the tan blocks the UVB much like a sunscreen does.  But the tan blocks UVA also.  UVA is the wavelength that doesn’t really burn but does stimulate the melanocytes (the pigment producing cells), which can cause melanoma.  If you slather on the sunscreen and stay out in the sun all day, you don’t get burned, but you do get a ton of UVA, which, until fairly recently, wasn’t blocked by sunscreen.  Now sunscreens contain agents that block both UVB and UVA, but no one knows yet whether these will prevent melanoma in the long run.
The paradox of melanoma is that this cancer typically develops as a response to too much sun but people with chronic sun exposure incur it less frequently than those with sporadic sun exposure.  This paradox can be easily explained.  Those who are out in the sun a lot develop a tan.  The tan blocks UVA, so there is less of the simulation for melanoma.  Those who go into the sun occasionally – office workers who vacation at the beach for a week – use sunscreen and stay out too long, receiving way too much UVA. UVA that increases the risk for melanoma.
I didn’t intend this to be a discourse on melanoma, sunscreens and vitamin D, but the idiotic response given by the ‘ultimate’ authority in our Golf Digest article got me going.
The take-home message from this post is to look for the pattern in these kinds of articles because they’re pretty much all the same.  You end up with a freelance writer arranging the experts to prove whatever the freelance writer – who is certainly no expert – wants to prove.  Or it may not even be what the freelancer wants to prove, but it is a function of how the best quotes fit with the structure of the piece.  “Grease up,” “hit the golf course,:” “swimming in vitamin D” – all are more pithy and memorable than any of the quotes above them.  Chances are RK wanted to end the piece with a bang, so he/she used the better quote giver as the ultimate expert.
Just remember, these kinds of pieces are put together more for their style than their content, so don’t put much faith in their accuracy.
More on vitamin D:
For info on the sun, vitamin D and its relationship with folate, click here.
Also, here is a great calculator designed by Norwegian scientists to determine how long you need to spend in the sun at various times of the year and various latitudes to get 1000 IU of vitamin D.  I recommend at least 5 times this amount to get 5,000 IU.
Click here to get a chart of US latitudes and longitude.
H/T to Annlee Hines for providing the link.