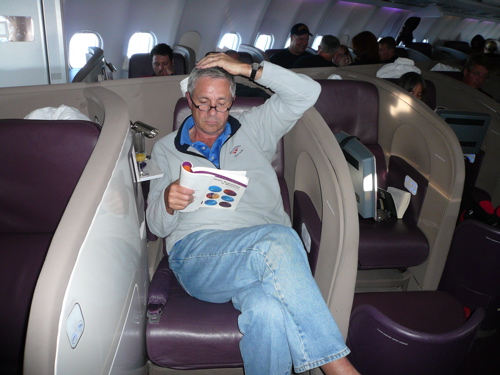 As you can see from the above picture, the accommodations on Virgin Upper Class are pretty nice. But the little individual compartments are not as comfortable as they probably look. Don’t get me wrong, I would much rather be there than crammed into a coach seat, especially a coach seat in the large middle aisle section. I’ve put in my time there already, thank you.
The Virgin Upper Class compartments are just about 2 inches too narrow to be completely comfortable. Even MD, who is considerably smaller than I, thought they were a little claustrophobic. But they have the virtue of being made into a flat bed, which is vastly superior for sleeping purposes to the most reclining of the reclining first class seats I’ve taken on other long-haul flights. I wouldn’t hesitate to fly Virgin again. The staff was friendly, courteous, helpful, and, all in all, superb. 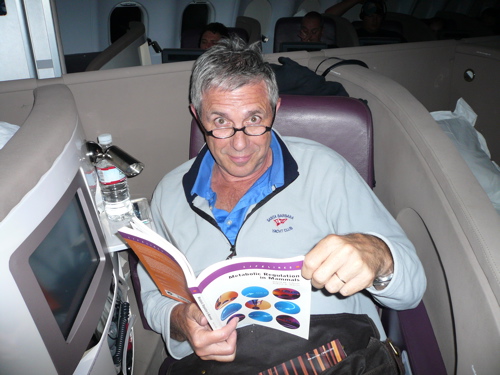 As should be obvious from this photo taken later in the flight after I had switched from Mimosas to water (Mimosa’s made with a lot of champagne and very little O.J.; got to keep those carbs down.), with me looking a whole lot happier than I had been about 24 hours earlier. I’m reading a pretty good book, too. I’ve been looking for a good book on signaling proteins and metabolic control, and my friend Richard Feinman, a professor of biochemistry at the medical school at SUNY Downstate in Brooklyn, recommended this one. The title looks dull as dishwater, but it’s actually a pretty good little book.
On another note, MD wants me to tell everyone that although this is the same ensemble I had on during the making of the Café Americano video, it’s not the only set of clothing I have. I have and wear about a zillion different blue golf shirts, and when it gets a little chilly – as it was on the plane and as it was on the night our kid came over to film the Americano video – I throw one of about three little polar fleece pullovers that I have. It just so happens that I threw the same one in for this trip that I wore on the night of the filming. I do have other clothes.
One last misadventure on this flight…
Remember a few months ago when there were a bunch of press reports about people sleep walking and even sleep eating with Ambien?  Well, apparently its true.  It happened to me.  I took an Ambien before I hit the hay on this flight.  I’ll have to let MD tell you about what happened because she was there and I really wasn’t.  She’s promised to blog about it in a day or two.  Needless to say, I won’t be taking any more Ambien.  I’ve never really taken the stuff, but a friend told me it worked like a charm for him when he tried to sleep on a plane, so I gave it a whirl.  Unlike my wife, I’m a really light sleeper, and when I’m trying to fall asleep on a plane, even the tiniest amount of turbulence keeps me from it.  I can’t fall asleep, not because the turbulence has me worried, but because it’s like someone shaking me awake just before I fall off to sleep. The turbulence on this flight was pretty brutal, so I popped an Ambien.  Bad move.