Seventy seven years ago today Vachel Lindsay, one of my favorite poets, despairing over finances, killed himself.

Lindsay was born into a prosperous family in Springfield, Illinois in 1879.  His father, a doctor, pushed Vachel into studying medicine, but the young man was more interested in art.  Much to his father’s dismay, Lindsay bolted from medical school and headed to New York to enroll in an art school.  While there, he developed an interest in poetry.

He began writing poetry and selling his poems on the streets of the Big Apple.  He launched off on the first of his several long treks, a 600 mile walking jaunt from Florida to Kentucky giving readings and trading his poems for food and lodging.  He made other trips by foot from New York to Ohio and from Illinois to New Mexico.

My interest in Lindsay came from an article I read by Paul Horgan, one of my favorite writers, about hearing Lindsay perform in Albuquerque, NM.

Horgan’s book Tracings inspired me to find out more about Lindsay and read some of his poetry.

I don’t know if it was the poetry, the recounting of meeting Lindsay by Horgan, or the strangeness of Lindsay’s life that struck a chord with me.  I read all of his poems, many of them out loud (to myself, of course), which is how they were meant to be read, as Lindsay performed them.  I read a few out loud to MD, and I stumbled onto the bizarrest phenomenon.  I’m not a weepy kind of guy by nature; I don’t cry at funerals, weddings, sad movies, sad books, etc.  But when I tried to read one of Lindsay’s poems out loud, I began to snuffle and couldn’t go on.  I can read the poem silently straight through without feeling even much of a twinge of emotion, but whenever I try to read it aloud, I can’t make it through.

What is the poem?

General William Booth Enters Heaven. (William Booth was the founder of the Salvation Army) When I get to the following lines a few stanzas down trying to read aloud, I kind of lose it, and I don’t know why.

Booth died blind and still by Faith he trod,
Eyes still dazzled by the ways of God.

From there on, I can’t read aloud any longer.  I’ve tried a dozen times, but it gets me every time.  Even if I read it aloud alone.

After Lindsay’s walking treks and his promotion by some famous poets of his day, he achieved some measure of financial success.  He lost out on a great love who married someone else much more financial successful than he.  He continued to roam and perform, while living here and there.

He ultimately married a much younger wife (23 years old; Lindsay was 45) and began having children.

In an effort to provide for his growing family he was under the financial gun.  He embarked upon six-month poetry reading journey throughout the East and Midwest.  After this tour, Lindsay and family moved into his childhood home in Springfield, Illinois.  Given the size of the house and the long move (Lindsay and family were living in Spokane, Washington at the time), his finances became even more strained.  He published a couple of books of poems, did odd jobs, and continued to travel and perform. 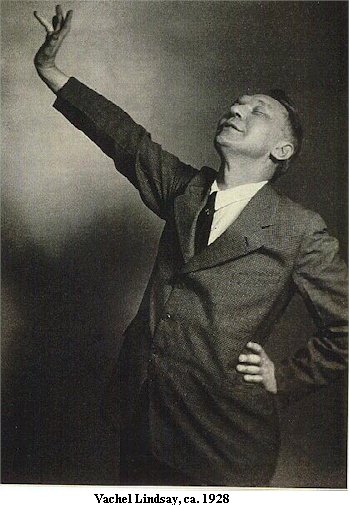 His health began to fail, and, along with the country, Lindsay sank into depression.  On December 5, 1931, at age 52, he killed himself in his childhood home by drinking a bottle of Lysol.

Because she knew how much I loved Lindsay’s poetry, MD found for me a tape (one of the old cassette tapes) of Lindsay performing a number ofhis poems, including General William Booth Enters Heaven, the Congo, and a poem I didn’t know existed until I heard it on the tape: The Flower Fed Buffaloes.

The Flower-Fed Buffaloes
The flower-fed buffaloes of the spring
In the days of long ago,
Ranged where the locomotives sing
And the prairie flowers lie low:
The tossing, blooming, perfumed grass
Is swept away by wheat,
Wheels and wheels and wheels spin by
In the spring that still is sweet.
But the flower-fed buffaloes of the spring
Left us long ago,
They gore no more, they bellow no more,
They trundle around the hills no more:-
With the Blackfeet lying low,
With the Pawnees lying low
Lying low.

As well as being beautiful in its simplicity, this poem speaks to what has happened to us nutritionally.

The tossing, blooming, perfumed grass
Is swept away by wheat,…
But the flower-fed buffaloes of the spring
Left us long ago,
They gore no more, they bellow no more,
They trundle around the hills no more…

(Gotta keep these posts with a nutritional theme, you know, or I get hassled.) Fortunately, the buffalo are making a comeback.  In Lindsay’s time there were but a few left.  Today the herd numbers into the tens of thousands and buffalo meat can be had most anywhere.

In all our moves, I’ve somehow misplaced by Lindsay tape, but I did an online search and found all the same recordings that were on the tape, so you and I can now listen to them at will.  Here is the link to them all.  If you don’t listen to anything else, at least listen to ‘The Flower-Fed Buffaloes.’ But before you listen, read it yourself aloud so that you can compare your reading with Lindsay’s.

The recordings included ‘General William Booth Enters Heaven,’ which I can listen to without emotion.  It’s only when I read it aloud.  Strange.

Enjoy the poetry from a bygone era when one could make a living (sort of) as a traveling poet.