Two eggs per day keeps the belly fat away 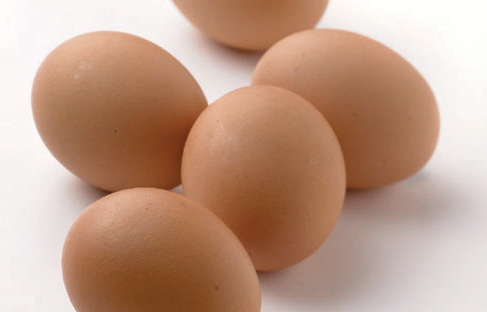 I found an intriguing study in the Advanced Online Publication section of the International Journal of Obesity.  (Currently you can download the full text of the article free here.  Often these articles go unfree once they are published, so grab it in pdf while you can.)  The paper shows the value of adding a couple of eggs to not just a low-carb diet, but to any calorically restricted diet.
The authors point out that since different foods confer different degrees of satiety (i.e., meat: a lot; pasta: not much), a diet composed of foods with higher satiety values might just help people lose weight more easily.  Well, duh.  Those of us in the low-carb biz have been saying that for years since low-carb diets are so much more satiating than high-carb diets, and, consequently, those who follow low-carb diets tend to spontaneously reduce their caloric intake.  Of course the lipophobes out there all then shout that the extra fat and cholesterol are going to clog the arteries of anyone following a low-carb diet.
The authors of this paper randomized 152 overweight subjects into four different study groups.  The groups were to follow one of four plans.  Subjects in one group (the egg group E) were instructed to eat an egg breakfast daily but to continue their regular, non-weight-loss diet otherwise.  Subjects in the bagel group (B) were instructed to eat a bagel breakfast and make no other changes in their diet.  The members of the third group (the egg diet ED group) were to eat an egg breakfast and follow a 1000 kcal reduced diet.  Subjects in the last group (the BD group) got instruction on eating the bagel breakfast while reducing kcal by 1000.  So, two groups ate bagels or eggs for breakfast and didn’t diet while two groups ate bagels or eggs and reduced their overall caloric intake by 1000 kcal from their diet before starting the study.
Here is the makeup of the egg and bagel breakfasts:

Now here’s where it gets interesting.  For the two groups on the dieting arms of the study, the researchers designed low-fat diets that cut 1000 kcal from the diets these overweight subjects were previously eating.  Then the researchers cut them loose and told them to go home and follow their diets.  No calling and encouraging them.  No visits by the dietitians.  No hectoring them to stick to their specific diet.  No requirement to keep a food diary.  The researchers wanted to make it as close to the way people in the real world go on a diet as possible.
At the end of two months, the subjects who had simply eaten the egg breakfast or bagel breakfast without any other dieting effort demonstrated no differences in weight.  The group who ate the egg breakfast while dieting, however, showed fairly dramatic changes when compared to those who ate the bagel breakfast and dieted.
Subjects in the ED group lost 65 percent more weight, had a 34 percent greater reduction in waist circumference, and a 16 percent greater reduction in body fat than did those in the BD group. (The ED group also had a 61 percent reduction in BMI, but who cares about BMI?)
The fact that the E group, those who simply added the egg breakfast to their regular diet didn’t lose any more than those in the B group, who added the bagel breakfast to their diet provides evidence that there isn’t something magical about the egg that causes non-dieting people to lose weight.  I suspect that those not trying to lose weight simply consumed their typical diet, and the bagel breakfast or egg breakfast didn’t change things much for them.
But, for those who were restricting calories, the satiating effects of the eggs must have helped them stick to their caloric restriction better than did the bagel.  And, as I’ve pointed out in other posts, carbs override the satiety center in the brain, allowing people to eat more even when they’re full.  The bagel breakfast provided almost 50 percent more carb than the egg breakfast.  Fat and protein both stimulate the satiety center causing a feeling of fullness more quickly, and the egg breakfast contained about 25 percent more protein and 30 percent more fat, which makes it kind of a no-brainer that the egg breakfast should be more satiating than the bagel breakfast.
But what about all the cholesterol?  Well, as it turns out, the addition of two eggs per day didn’t raise cholesterol a bit.  There were no significant changes in total cholesterol, LDL-cholesterol, HDL-cholesterol or triglycerides between the ED and the BD groups.  If you look at the trend (a dangerous thing to do because it isn’t relevent), you can see that all the small changes in lipids were in a direction one would expect on a lower-carb diet: a little lower cholestero, lower LDL, higher HDL, and lower triglycerides.  But nothing of statistical significance.  If there were more people on the study or it was longer, these differences may have reached statistical significance, but they hadn’t when this study ended.  What the data do show, however, is that adding a couple of eggs per day doesn’t do squat to your cholesterol level.
I’m glad that the researchers used a real world setting for this study instead of performing it in a metabolic ward where calories could be monitored closely.  Even though data from these types of studies tend to be more exact, they don’t tell what happens in real life when people simply go on a diet and monitor themselves.  Anyone can lose weight on the Auschwitz diet if they are in Auschwitz, and I’m sure any studies of such a diet would show pretty spectacular results.  But who cares? No one is going to go on that diet even if it does produce spectacular results.  For a diet to be effective it must be one that people can follow on their own without a team of people monitoring, encouraging and recording every bite.
This egg verses bagel study is helpful because it shows once again that limiting carbs – even a little – while adding fat and protein helps to bring about more weight loss, and more weight loss in the right place, which is around the waist.  Most readers of this blog I would imagine are low-carbers, and this information, though interesting, won’t provide any new or exciting ideas for helping to accelerate weight loss.  But, based on the comments I get, many readers have family members or friends whom they know would improve on a low-carb diet, but can’t get that person to try a low-carb diet thanks to all the negative press, ignorant doctors, misguided friends, etc.  This study shows a nice way to ease them into a low-carb diet without a lot of fuss.  Show them the paper, then tell them to go ahead and follow their low-fat diet but eat a couple of eggs for breakfast. The decreased hunger and increased weight loss along with the stable lipid values (should they get them checked) should go a long way toward persuading your friends and/ or loved ones that they should maybe edge a little further down the low-carb road.
If all goes well as they inch along, before you know it, they’ll be hooked like you are.