I received a short paper from a colleague in Portugal a couple of days ago that demonstrates in just a few pages how science should really work.

The paper from the journal Diabetologia reports on a study done in Pakistan showing that high-dose thiamin (vitamin B1) may be a valuable therapeutic agent in the treatment of diabetic nephropathy.   This small study certainly isnt the final word, but it does show how medical science should work.

First, the paper starts off in the introductory paragraphs discussing how the idea for high-dose thiamine therapy came about.  Before we get into that, however, let me digress briefly to discuss diabetic nephropathy for those who are unfamiliar with it.

The main job of the kidney is to remove waste products from the blood while keeping the non-waste products, i.e., proteins, sugar, etc. in the blood.  You can think of the kidney as a sieve with tiny holes.  All the waste that needs to be filtered is small enough to fit through the holes while the substances meant to remain unfiltered are large enough to not fit through the holes.  If you were to pour liquid containing both waste and non-waste matter into a long tube with your sieve somewhere in the middle in a place non-visible to you, you could check to see if your sieve were damaged by looking at what comes out at the bottom of the tube.  If you find only waste, then you can be pretty certain that your sieve is functioning.  If, on the other hand, you find material coming out the bottom that should have been caught by the sieve, you can be pretty sure there are holes torn in your sieve.

In people with diabetes, microalbuminuria means the kidneys are starting to develop nephropathy, or pathology (or disease) of the nephron (the basic unit of the kidney).  To go back to the sieve analogy, theyve developed bigger holes in their sieve. This condition afflicts about 40 percent of those with diabetes and can (not that it always does, but it can) progress to complete kidney failure, requiring dialysis or kidney transplant.

Diabetic nephropathy is most likely caused by the toxic effects of too much sugar in the blood and is helped, and even reversed, by careful control of blood sugars.  Despite this common knowledge, many unenlightened people continue to treat the condition by limiting dietary protein instead of focusing on the continuing damage caused by elevated blood sugar.  In order to keep caloric intake up, what do people substitute for protein?  You got it.  Carbohydrates.  And since dietary carbohydrates become blood sugar fairly quickly, they end up damaging the kidney more than the protein they are replacing.

Now that youve got at least a working notion of what diabetic nephropathy is, lets look at our paper.

The authors start off with a description of the research on thiamin to date that gives us a nice picture of how the various types of studies all tie together to make real science.

First off, someone noticed that people with diabetes and protein in their urine had low blood levels of thiamine.  This observation prompted researchers to do observational studies of this phenomenon.

In evaluating large numbers of subjects with and without diabetes and protein in their urine, scientists determined that the diabetics typically had lower blood thiamin levels than the non-diabetics.

But, at this step, these studies are simply observational studies and cant possible prove causation.

The next step in the scientific evolution is to hypothesize that low thiamin levels are somehow involved in the development and/or progression of diabetic nephropathy.  If this hypothesis is valid, then giving thiamin should improve the condition.

Researchers gave thiamin to rodents with diabetes and discovered that increasing blood levels of thiamin reduced or eliminated proteinuria in the animal model.

Here is where the tricky point arrives in the study of drugs  trying them in humans.  As Ive written many times in these pages, rodents are not just furry little humans.  What often causes no problems for them causes huge problems, including the ultimate problem  death  in humans.  So it is a difficult business to start giving experimental drugs to humans.

In this case, however, it isnt so bad because thiamin  even in high doses  is non-toxic to humans.  The next step is the randomized, double-blind, placebo-controlled clinical study, which the authors of our paper under discussion performed.

Researchers randomized a group of 40 subjects who had diabetes and microalbunuria into two groups.  Subjects in one group got three 100 mg thiamin capsules per day; subjects in the other group got placebo.  (I couldnt tell from the paper whether the three capsules were spread out over the day  I would assume they were  or were taken all at once.)  The two groups remained on their supplement regimen for three months followed by a two month washout (a period in which no one either thiamin or placebo).

The results were pretty spectacular.

There was a significant drop in the amount of protein in the urine of subjects taking thiamin as compared to those taking placebo.  Even more exciting was the following:

After [thiamin] therapy for 3 months, regression of microalbuniuria to normal urine albumin had occurred in 35% of the patients.

Over a third of the patients on thiamin had no more evidence of diabetic nephropathy, at least as demonstrated by protein in the urine.  This is a spectacular result, especially for a natural substance with virtually no toxicity.

I appreciate the way the authors of this paper presented their data.  It is much more informative than simply providing the average differences between the study group and the control group.

Take a look at the graphs below.  The upper figure is the overall change in microalbunuria between the groups.  The middle graph is the change in the subjects on placebo; the bottom graph shows the changes in subjects on thiamin. 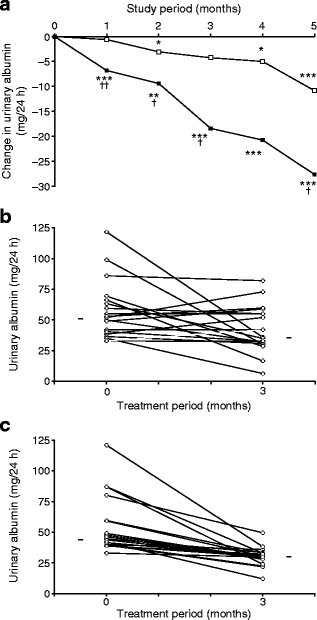 As you can see, the results of each subject are presented a single line.  You can tell a lot from these kinds of graphs.  For example, you can see that in the thiamin group there was a generalized downward slope to all the lines, which means that all the subjects improved on the regimen, a fact that is most important.  The middle graph, the one showing the results from the placebo is interesting as well.  You can see that the vast majority of subjects had no change while a couple had significant changes.  Why would there be improvement on the placebo?  Who knows?  If I had to guess, I would guess that those subjects taking the placebo who showed the major improvement may have changed their diets on their own.  These were patients at a diabetic clinic who were being treated for their condition, so maybe these subjects were more aggressively treated.  But, it really doesnt matter because we can see from the flat lines of most of them that there was no change due to the placebo.  This type of graph at least allows us to speculate and to realize why there was a slight drop in the average level of protein in the urine of even those subjects on placebo.

The authors note in their discussion that

this is an encouraging pilot-scale outcome that high-dose thiamin reverses early-stage nephropathy in type 2 diabetes.

They go on  as they should  to recommend larger scale studies to see if their findings hold up.

Based on this study, would I, myself, take thiamin in 300 mg per day doses if I had diabetic nephropathy?  Absolutely.

Although it is only a pilot study, the results are pretty stunning.  But the drug is harmless.  So what is the risk?  A few pennies per day for the thiamin?

If this were a study in which, say, statins were used as the agent, I wouldnt be quite as eager.  I would probably wait until other larger studies had replicated these findings.  Why?  Because statins arent harmless.  One can die from them. Or can have miserable generalized muscle aches and weakness.  In other words, there is a lot bigger downside to taking statins than there is to taking thiamin, so I need a much greater level of comfort to make the risk/reward calculation in favor of taking a statin.

The only weakness I can find in this paper is that the authors spent no time discussing the possible mechanism for the benefits of thiamin on diabetic nephropathy.  Perhaps they ran out of time and are saving it for another paper. Alas that is what has happened to me as well.  MDs group is performing with the symphony today, and Im being badgered to get ready to leave.  So, I, too shall leave a discussion of the potential mechanism to a future post.

Hat tip to Pedro Bastos for sending me this paper.