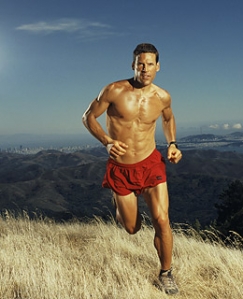 Dean Karnazes is an ultramarathoner whose most recent exploit was to run 50 marathons in 50 consecutive states in 50 consecutive days.  Not a bad feat.  His endurance seems almost superhuman, and, based on what I’ve read about him, I suspect it is.  A recent article in the magazine Wired explained how he got started running 14 years ago.

DEAN KARNAZES WAS SLOBBERING DRUNK. IT WAS HIS 30TH BIRTHDAY, and he’d started with beer and moved on to tequila shots at a bar near his home in San Francisco. Now, after midnight, an attractive young woman – not his wife – was hitting on him. This was not the life he’d imagined for himself. He was a corporate hack desperately running the rat race. The company had just bought him a new Lexus. He wanted to vomit. Karnazes resisted the urge and, instead, slipped out the bar’s back door and walked the few blocks to his house. On the back porch, he found an old pair of sneakers. He stripped down to his T-shirt and underwear, laced up the shoes, and started running. It seemed like a good idea at the time.
He sobered up in Daly City, about 15 miles south. It was nearly four in the morning. The air was cool, slightly damp from the fog, and Karnazes was in a residential neighborhood, burping tequila, with no pants on. He felt ridiculous, but it brought a smile to his face. He hadn’t had this much fun in a long time. So he decided to keep running.
When the sun came up, Karnazes was trotting south along Route 1, heading toward Santa Cruz. He had covered 30 miles. In the process, he’d had a blinding realization: There were untapped reservoirs within him. It was like a religious conversion. He had been born again as a long-distance runner. More than anything else now, he wanted to find out how far he could go. But at that exact moment, what he really needed to do was stop. He called his wife from a pay phone, and an hour later she found him in the parking lot of a 7-Eleven. He passed out in the car on the way home.

Now (or even when I was 30 years old) I couldn’t simply throw on an old pair of sneakers, head out the door, and run 30 miles.  Drunk or sober.  I would have to be worse than slobbering drunk to even consider it.  I’m not sure I could throw on a pair of sneakers any time in my life and even walk 30 miles, much less run them.  Not without training for it, and the article implies that he was not previously a runner. This is obviously a guy who is just put together right for the sport of running.  I don’t know what the ultimate effect will be on his knees and hips, but for now, he seems to be doing okay.  As I say, he’s put together right for it.
This same article lists the 12 secrets to his success.  I was keen to see if he had any dietary advice, and sure enough he did.  Number 4 on the list.

4. EAT JUNK – LOTS OF IT
You wouldn’t believe the stuff Karnazes consumes on a run. He carries a cell phone and regularly orders an extra-large Hawaiian pizza. The delivery car waits for him at an intersection, and when he gets there he grabs the pie and rams the whole thing down his gullet on the go. The trick: Roll it up for easy scarfing. He’ll chase the pizza with cheesecake, cinnamon buns, chocolate éclairs, and all-natural cookies. The high-fat pig-out fuels Karnazes’ long jaunts, which can burn more than 9,000 calories a day. What he needs is massive amounts of energy, and fat contains roughly twice as many calories per gram as carbohydrates. Hence, pizza and éclairs…

I’ve received numerous emails and comments about the high-calorie, high-carb diet that Michael Phelps consumed on his way to eight Olympic gold medals.   What I tried to tell all those who communicated with me about it is that it is possible to eat this way if a) you’re young, and b) if you’re burning a zillion calories in intense physical activity.  As Mr. Phelps ages, he won’t be able to keep up the same intensity of activity.  If he continues to eat the way he does now, he will not be the better for it.  I would predict that he would become obese.  And it’s not just Mr. Phelps to whom this happens.  It’s called the ex-jock syndrome.  Many professional athletes struggle with obesity when their playing days are over.  There activity level falls but their food intake doesn’t.  And they pay the price.
But what about Dean Karnazes?  He is 44 years old, way beyond the age of most professional athletes who have retired and gotten fat.  Why has he escaped while eating the enormous amounts of high-carb foods he does.  A couple of reasons.  First, he is still active as evidenced by the 50 marathons in 50 days.  And, second, he doesn’t eat all the high-carb foods all the time. (I suspect that Michael Phelps doesn’t either.)  I intentionally left off the last part of his recommendation to eat lots of junk.  Here it is:

When he’s not in the midst of some record-breaking exploit, Karnazes maintains a monkish diet, eating grilled salmon five nights a week. He strictly avoids processed sugars and fried foods – no cookies or doughnuts. He even tries to steer clear of too much fruit because it contains a lot of sugar. He believes this approach – which nutritionists call a slow-carb diet – has reshaped him, lowering his body fat and building lean muscle. It also makes him look forward to running a race, because he can eat whatever he wants.

Apparently Mr. Karnazes is as smart as he is fit.  He eats everything that’s not red hot or nailed down while he’s running, but he eats what sounds a lot like a low-carb diet when he isn’t.  Which makes a lot of sense.  When you are burning the calories that he does on his long runs, the body will use up most anything you put into it.  And it doesn’t matter what it is.  I’m sure that due to his conditioning Mr. Karnazes is highly insulin sensitive and has low circulating insulin levels.  If you want to eat like he does, it’s a simple matter: run like he does.  Otherwise, you’re better off eating like he does when he’s laying around the house.