The case of the disappearing bees

Much has been made in the news lately of the disappearance of the normally ubiquitous honey bees from much of the United States. Although many people regard these little critters as more of an annoyance than anything else, insects buzzing around irritatingly at picnics, capable of administering a painful sting (which can be fatal to the severely allergic individual), bees are essential for life as we know it. Much of the agricultural produce we eat exists thanks to the pollination work of bees. A complete loss of the bee population would be catastrophic.
MD and I have had a little experience with bees. One of the investments we made (that didn’t particularly pay off – in fact, we’re probably two of the only people who haven’t made money on California real estate) was in a 20 acre avocado orchard 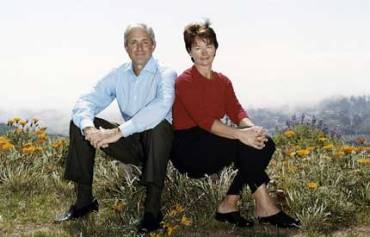 on a hill overlooking the Pacific Ocean. (This picture of us sitting on the top of this orchard with the Pacific in the background on a kind of foggy day was used in an article about us several years ago in Forbes Small Business.) When we bought the property we discovered all the substantial expenses that went in to growing avocados up to and including losses from avocado rustlers, a major problem. Groups of these thieves can come in at night and clean an orchard out of several tons of fruit. To keep them out requires fences and gates and even a security service.
Avocado trees require pollination to produce fruit, and although this can be done by hand, it is most often done by bees. But you can’t count on the bees you see buzzing around all the colorful flowers all over the place in California, you have to import bees. Why? Because you need a lot of them, and because bees don’t particularly like the taste of avocado nectar. Given the choice, they will take almost anything but avocado nectar. But if you put multiple hives of them in the middle of a large orchard, then they take what they can get without having to fly a long way. Part of our uncounted-on expense was to pay the guy to bring the hives at the appropriate time of the year, tend them, then come pick them up. And bees ain’t cheap.
Now the bee people are bringing their hives, letting the bees loose, and never getting them back. Whereas before the bees would buzz around gathering pollen and bring it back to the hive, now they’re taking a powder. No one knows what’s happening to them. The avocado orchards and almond orchards (almonds are 100 percent dependent on bee pollination) are not knee deep in bee corpses, bees are not lying dead around the hives, they’ve simply disappeared. Experts are calling the situation colony collapse disorder (CCD). There is speculation that the problem could be some kind of bacteria or parasite that infects the bees. Suspicion has also fallen on a particular type of pesticide. But no one really knows what’s going on, they just know that agriculture could be in real trouble if a solution to the problem isn’t found.
The New York Times weighed in on the situation with a long article in the Science section this past Tuesday:

“There are so many of our crops that require pollinators,” said Representative Dennis Cardoza, a California Democrat whose district includes that state’s central agricultural valley, and who presided last month at a Congressional hearing on the bee issue. “We need an urgent call to arms to try to ascertain what is really going on here with the bees, and bring as much science as we possibly can to bear on the problem.”
So far, colony collapse disorder has been found in 27 states, according to Bee Alert Technology Inc., a company monitoring the problem. A recent survey of 13 states by the Apiary Inspectors of America showed that 26 percent of beekeepers had lost half of their bee colonies between September and March.
Honeybees are arguably the insects that are most important to the human food chain. They are the principal pollinators of hundreds of fruits, vegetables, flowers and nuts. The number of bee colonies has been declining since the 1940s, even as the crops that rely on them, such as California almonds, have grown. In October, at about the time that beekeepers were experiencing huge bee losses, a study by the National Academy of Sciences questioned whether American agriculture was relying too heavily on one type of pollinator, the honeybee.

It surprised me that the situation has reached the point that there are even congressional hearings on CCD in Washington, but the sentence that really jumped out at me was this one:

The number of bee colonies has been declining since the 1940s…

It caught my eye because of an something I had just read a couple of days ago. I read an article in the September 1944 issue of Popular Science on one of my favorite blogs. This article discusses all the scientific research taking place in the mid 1940s to improve on nature, which results often accomplish just the opposite. (Think: trans fats) 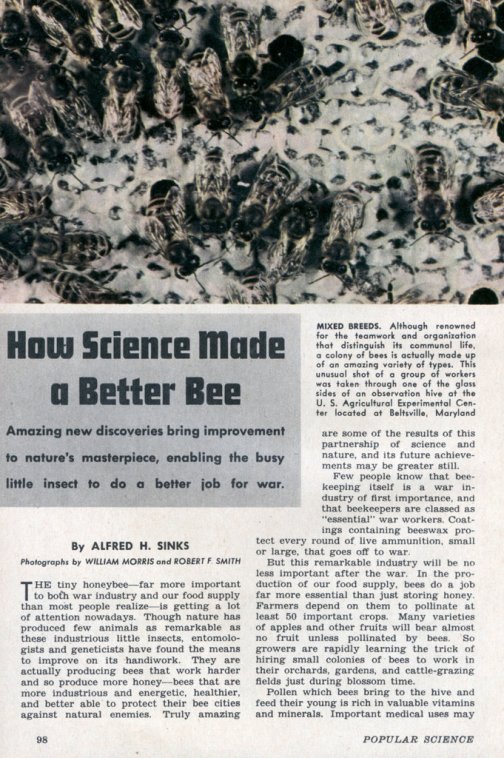 Here are a few sentences sprinkled throughout the piece:

Amazing new discoveries bring improvement to nature’s masterpiece, enabling the busy little insect to do a better job for war.
…and trying to improve on nature by careful mating of selected queen bees with selected drones.
How do bee breeders help nature to produce better and better bees?

(Click here to read the entire article.)
Makes me wonder if the damn-the-torpedoes-full-speed-ahead efforts of the etymologists of the 1940s to give nature a helping hand has had anything to do with the decline of the bee population since?
As the old commercial says, “It’s not nice to fool Mother Nature.”