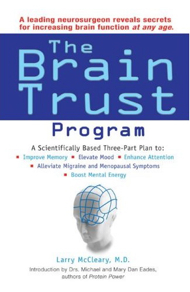 I had a question from a friend today about migraine headaches. I remembered reading about them in Dr. Larry McCleary’s new book The Brain Trust Program, so I thumbed through the book to see what he had to say. (I had read the book in manuscript form, but couldn’t remember the specific recommendation for migraine headaches.) I became engrossed in the material all over again, and after a couple of hours of reading it dawned on me that I hadn’t reviewed the book for this blog.
First, a bit of disclosure. Dr. McCleary is a good friend of mine as well as a business partner for a number of years. And MD and I wrote the Introduction to his book. But we didn’t write it because he was a friend and partner, but because the book is so good.
Before we delve into the book let me tell you a little about Dr. McCleary. He is one of the smartest people I’ve ever met, and I’ve met a lot of smart people in the medical and nutritional business. He graduated at the top of his class

from an Ivy League university, got accepted into a big name physics Ph.D program where he stayed for three years and ended up with Roger Penrose (the guy who co-writes the books with Stephen Hawking) as his mentor. When Penrose decided to go back to the UK he wanted to take Larry with him, but Larry had decided that he wanted to bolt from physics and go into medicine instead, so the timing worked out nicely. He graduated first in his class in medical school, then ended up doing a neurosurgery residency and a pediatric neurosurgery fellowship. He had a huge practice in Denver, Colorado where – along with carrying a heavy neurosurgical load – he was the Director of the Neuroscience Research Program at the prestigious Children’s Hospital. And he is the only person I know who reads more medical papers on a daily basis than I do.
MD and I had been encouraging him to write a book for years, and he finally took the plunge. And what a book it is. Most books on the brain written by medical professionals present programs to forestall the inevitable mental decline that comes with aging. These books typically recommend low-fat diets along with a few supplements and some brain exercises to help you keep your mental abilities from drifting away as you reach your golden years. Dr. McCleary’s book is the only one I’ve really seen that tells you not only how to keep your brain from deteriorating with age but shows you how to actually improve cognitive function. And guess what? You don’t improve cognitive function with a low-fat diet. But the book is much more than simply a book on improving your thinking. Among other things it shows how to reduce migraine headaches, improve your ability to study (Dr. McCleary goes into the techniques he used to study so that he could graduate first in his class in every school he attended), protect your brain from excitotoxins and even how to markedly reduce symptoms of menopause.
I’m going to excerpt a little from his section on supplemental nutrition for the brain. Many readers of this blog appear to be interested in krill oil, so we’ll see what Dr. McCleary has to say about it.

Krill, tiny shrimp-like creatures, inhabit the lowest rung of the food ladder, dining mainly on plankton, which are the actual omega-3 factories. As a result, krill enjoy a low risk of being contaminated by the mercury or other toxins present in their larger fishy cousins. Their oil, in my opinion, is the best source of essential brain fats available. Not only does krill oil provide substantial amounts of EPA and DHA but it also contains a rich supply of another group of critical fatty substances necessary for brain and nerve cell membranes to function properly: the phospholipids, which play important roles in signal transmission, in energy generation, and in the construction of the insulation coating myelin (which helps speed conduction along the brain’s communication pathways). The omega-3 fatty acids in krill oil are bound to these phospholipids. This unique relationship greatly facilitates the passage of the fatty acid molecules through your intestinal wall making them much more bioavailable (easily incorporated by the body). The predominant phospholipid in krill oil is phosphatidylcholine, making it a rich source of choline, which many studies have demonstrated as being important in brain development, learning, and memory. It is also the precursor for the vital memory neurotransmitter acetylcholine.
Krill oil also naturally contains high concentrations of a number of healthy antioxidant compounds that not only protect the krill oil but also protect your brain… These include vitamin A, vitamin E, astaxanthin, and canthaxanthin. Astaxanthin forms a special linkage with EPA and DHA, thus making it more readily available to the body than other antioxidants on the market. For this reason, while consumption of fish oil breaks down and therefore decreases your body’s antioxidant concentrations, krill oil actually increases levels of antioxidants in the body.

The parts of the book I found most intriguing are in Part III: Novel Applications of the Brain Trust Program.
One of the incredible interesting applications of the nutritional advice provided in this book is in the reduction of the symptoms of menopause. I’m all for anything that reduces the symptoms of menopause because a certain person I know well who shall remain nameless from time to time experiences these symptoms. And when she experiences them, so do I in a second-hand sort of way. So since I’m impacted, I’m interested.
And I’m not the only one who is interested. I saw a recent blurb showing the results of an Archer Daniels Midland survey showing that a majority of women want their doctors to inform them about non-medical options for relieving the symptoms of menopause.

As part of the ADM-sponsored survey, “Women & menopause: a look at supplement use,” 1,258 women between the ages of 40 and 55 were polled.
A third of these women indicated they do try natural supplements for the relief of menopausal symptoms, and a quarter said natural supplements are their “treatment of choice.”
Also, according to ADM, nearly all the respondents who are using dietary supplements for hot flashes say these are their “favorite method of treatment”.

Of course, this survey is totally self-serving because what ADM is really interested in is selling women on the idea of using soy products, produced naturally by ADM, to relieve these symptoms. But given the recent controversy over hormone replacement therapy, I’m sure many women are indeed looking for a natural way to reduce the often completely miserable symptoms of menopause.
(By the way, I would encourage anyone thinking of taking soy to reduce the symptoms of menopause or for anything else to spend the time going through the soy section of the Weston Price Foundation site.)
Dr. McCleary’s method of treating menopausal symptoms doesn’t use soy, but uses another natural substance instead: ketone bodies.
How do ketones treat these symptoms? They do so by replacing glucose that’s lacking from the estrogen-deprived brain.
Dr. McCleary provides a fascinating discussion of what happens in the brain that results in hot flashes when estrogen is withdrawn after many years of constant exposure. During these years of exposure estrogen becomes intimately involved in the development of the shuttles that transport sugar into the brain cells. With estrogen present – as it is in the premenopause years – these shuttles transport about 40 percent more sugar into the brain cells than would be transported without the estrogen. When the estrogen goes away at menopause, the shuttling of sugar into the brain cells decreases, and the brain cells become a little starved for energy. Dr. McCleary explains how the hypothalamus responds to this starvation by

stepping up the release of norepinephrine [adrenaline], which acts to raise the level of sugar in the blood, to raise the heart rate, and to raise the body temperature. The hot flash, then, is a specific outward sign of the brain’s trying to protect itself from blood sugar starvation.

Long time readers of this blog will know that ketone bodies are water-soluble fat breakdown products that can pinch hit for glucose in the brain and other tissues. Dr. McCleary shows how ketones do this to prevent hot flashes, and he even gives a recipe for a ketone cocktail to provide even more ketones to feed the hungry brain that isn’t getting enough sugar.
No other brain book written discusses this kind of information, I can assure you. And the bits I’ve discussed here just scratch the surface. I encourage you to order a copy of The Brain Trust Program and add it to the core of your low-carb library. You can get additional information and updates about his research from Dr. McCleary’s blog.