George L. Blackburn, M.D.
A reader commented on yesterday’s post guessing that I was going after Dr. Blackburn for his advocacy of weight-loss surgery. I’m not. He gets the award named after him for much worse. Advocacy for weight-loss surgery is boneheaded to be sure, but Dr. Blackburn is a surgeon, so we can kind of forgive him his tendencies in that direction. Plus, there have been a number of papers published lately promoting bariatric surgery as a treatment for not just obesity but for diabetes as well, so he at least has some – misguided, in my view – rationale for his surgical advocacy.
No, what I am presenting here is his latest medical writing. He wrote a commentary piece for the debut of the new journal Obesity that is mind numbing in its insipidity. I have never read so many totally stupid statements in such a short (one page without references) paper in my life. It makes me wonder if there is an editorial staff for this journal, and if so, were they off the day this dreck came through.
You can read the piece in its entirety here. In fact, you can read this entire issue of the journal free. And lest you suspect that this is some throw-away journal that no one reads, let me assure you that it is not. This journal is published by the Nature Publishing Group, the same group that publishes Nature, probably the most respected scientific journal in the world. It is the replacement for the journal Obesity Research, which is the house organ of the Obesity Society, nee NAASO, the academic obesity group. So, as I say, it’s not a slouch journal.
Dr. Blackburn’s piece is short, so let’s go through it almost paragraph by paragraph just looking at the crass stupidity manifest there.
The premise of the article, title The Low-Fat Imperative, is that we (the august group of obesity ‘experts’ who read this journal) should encourage everyone to go on low-fat diets to defeat the obesity epidemic.
Oh, really? Let’s take a look.
Strangely, given how short this piece is, there is a fair amount of repetition. Dr. Blackburn starts out by mentioning two studies that he says support the idea that reduced fat consumption is a good thing. (He repeats this first sentence almost word for word three paragraphs later.) Then he comes up with his first insipid statement.

20–25%) can reduce mean energy intake by 100 kcal/day—enough to stop the growing epidemic of overweight and obesity.

Do tell. And his second.

Our task is not to debate whether low-fat diets work, but to find ways to increase adherence to them.

In other words, we’re not interested in whether or not low-fat diets are the optimal diet, we simply want to promote them. He precedes this idiotic statement by referring to two studies contained in this issue of Obesity that he contends support the idea that low-fat diets are efficacious in treating obesity. You can read the two studies he references here and here, and although the second one minimally supports his premise, the first one doesn’t at all. In fact, it concludes

Energy intake, but not percentage of energy from fat, appears responsible for the observed weight gain.

Not particularly a resounding endorsement for the low-fat diet.
After the obligatory paragraph about the extent of the obesity epidemic, he goes on to write

Cutting dietary fat is the most efficient way to stop the obesity epidemic.

How he can write this with a straight face, I don’t know. Especially since virtually every study done comparing low-carb diets to low-fat diets has proclaimed low-carb diets the winner.
Here is a chart from another journal from the Nature group published a few months ago showing the superiority of the low-carb diet as compared to the low-fat one. Did Dr. Blackburn not see this article? Has he not kept up with all the studies emerging showing the low-carb diet to be the preferred diet for weight loss? 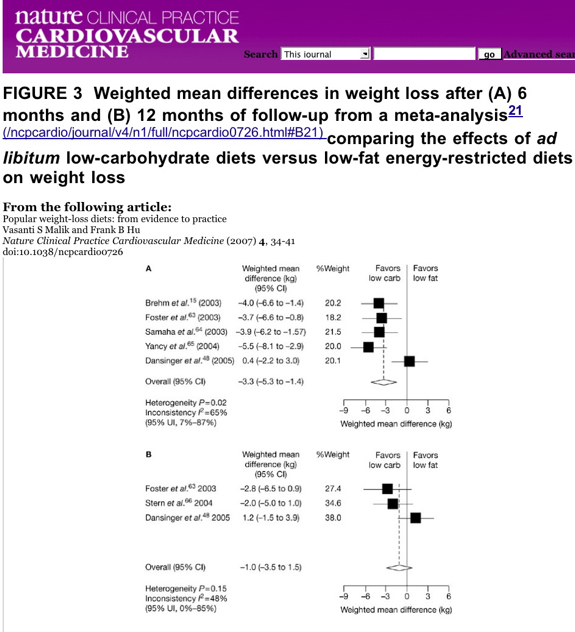 The forth paragraph is a virtual word for word repetition of the first with the added idiocy that low-fat diets can reduce energy intake by 100 kcal per day leading to a 10 pound weight loss over a year, which, in Blackburn’s mind, is

enough to stop the growing epidemic of overweight and obesity.

Pitiful. Dr. Blackburn has obviously never read the papers on adaptive thermogenesis.
Then he goes on to say that there is a question as to whether or not low-fat diets can be adhered to for the long haul. He references the Women’s Health Initiative (WHI) study as proof that they can. Instead of my going through the WHI myself, let me simply give you the pdf of the critique of it that came from JAMA, the journal in which it was published. I certainly wouldn’t use the WHI to prove that low-fat diets are effective for the long haul. whi-editorial.pdf
He drones on about a couple of other allegedly supportive studies then writes:

Unlike a diet high in carbohydrates and proteins, a high-fat diet works against the goals of healthy eating.

Since the goals of healthy eating have gotten us into the mess we’re in with the obesity epidemic, it would seem that working against those goals would be a good thing, not a bad thing.
He tells us that

The United States Department of Agriculture has been recommending moderate fat intake since it released its first set of nutritional guidelines in 1916.

The American Dietetic Association, American Heart Association, National Heart, Lung, and Blood Institute, and the Institute of Medicine all recommend lifetime consumption of diets high in vegetables and moderately low in fat.

What he doesn’t tell us, however, is that since all these groups began recommending the low-fat diet, rates of obesity and diabetes have skyrocketed.
Then he really goes over the edge. He wades into the evolutionary aspects of diet, a place he should avoid in the future. He writes:

To support this ludicrous statement, he references Loren Cordain’s seminal paper on the plant/animal subsistence ratios of hunter/gatherers, which shows that most hunter/gatherers got 65 percent of their calories from foods of animal origin and 35 percent from plants. Who knows where Blackburn got his numbers? As Loren emailed me when I sent him this paper

Nowhere in that paper do we give the numbers he quoted. We provided these ranges of macronutrient estimations are being most likely (protein 19-35% energy, carb 22-40% energy, and fat (28-58% energy).

Finally he comes out with one of the stupidest statements I’ve ever read. (I swear it’s true; read the article to see for yourself.)

As all macronutrient-based diets produce similar long-term weight loss, it does not matter which one people choose…

Our task is not to debate whether low-fat diets work, but to find ways to increase adherence to them. We need to spread the message that moderate weight loss of 10% is an acceptable, healthy option for those who want to lose weight—an option easily achieved by cutting small amounts of fat out of each meal. This is a reasonable and realistic goal, one that can be achieved as well as sustained.

We’ve had several instances of misrepresenting others’ work, a couple of examples of failing to understand the data, a few misinterpretations of what’s going on, and an outright, no question about it, idiotic statement. All in one short article. Stupidity compressed.
So now you know the rationale for the Blackburn Award, which will go to the person who makes most feckless, stupid, dogmatic, insipid nutritional statement imaginable. And whoever makes such a statement will have to go a long, long way to top that made by the man after whom the award is named.