The best low-carb book in print 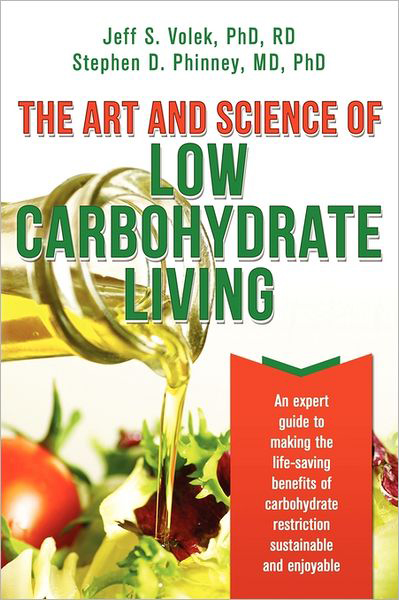 I can think of no better navigators than the authors of this book. Both of them have done a large part of the hardcore research on low-carb dieting that is in the medical literature today.  Go to PubMed and enter Volek JS or Phinney SD in the search window, hit ‘Search,’ and you will be rewarded with more peer-reviewed scientific papers on low-carb dieting than you will have time to read.  Many of the experiments described in these papers are explained in easy to understand language in their book.
Disclosure: Both Dr. Volek and Dr. Phinney are friends and colleagues of mine.  But they did not send me a copy of their book for review.  I purchased it from Amazon and paid the full price of $29.95 (it is now $19.95).  I bought it months ago and carried it with me all over Europe and on a half dozen other trips since but didn’t have time to even crack it until I was on the last leg back from our holiday trek.  It sounds cliché, but I couldn’t put it down.  I read and annotated the entire book over the course of two long flights.  Virtually anything anyone could want to know about the science behind low-carbohydrate dieting can be found in this book.
I’ll give you just one example.  It is common knowledge among many nutritionist, doctors and journalists that saturated fats are bad for us.  Most believe eating saturated fats leads to higher levels of saturated fats in the blood, which they inevitably describe as ‘artery-clogging saturated fat’.  Drs. Volek and Phinney, who certainly don’t believe this nonsense, understand adaptation to a low-carbohydrate diet changes the way the human body metabolizes different fats.  Eating more fat on a low-carbohydrate diet speeds up the burning of fat in general and saturated fat in particular.
There are only three things the body can do with saturated fat from the diet (or saturated fat made from dietary carbohydrate — and, yes, the body can and does make saturated fat from dietary carbohydrate).  It can burn them, store them, or convert them to a mono-unsaturated fat.  When people go on low-carbohydrate diets, they reduce their insulin levels, which in turn allows fat to escape from the fat cells to become the body’s primary fuel.
But what happens when a person increases saturated fat intake as part of a low-carbohydrate diet?  Drs. V & P knew that saturated fat burning would increase, but would enough burn to offset the extra amount of saturated fat coming in as part of a high-fat, low-carbohydrate diet?
To find out, they put 20 subjects on a low-carbohydrate diet for 12 weeks and another 20 subjects on a low-fat, high-carbohydrate weight loss diet for the same length of time.  The subjects in the low-carb group consumed three times the saturated fat per day (36 g vs 12 g) as did those in the low-fat group.  The blood from the subjects in both groups was then tested to determine total triglyceride level and specific fatty acid composition.
What did the good docs find?

In the serum samples done at baseline and again after 12 weeks, serum triglycerides  in the low fat group went from 187 to 151 mg per 100 ml, a tidy 19% reduction.  But in the low carb group, the before and after values were 211 and 104, a whopping 51% fall.  Both visually (just looking at the numbers) and statistically, the low carbohydrate group had a much greater (better) reduction in serum triglycerides.

The above should come as no surprise, because everyone knows that a low-carb diet reduces triglyceride levels.  But what about the amount of saturated fat in the blood?

To summarize, a three times higher intake of saturated fats leads to a 30% drop in saturated fats in the blood of those following a low-carb diet as compared to those following a low-fat, high-carb diet.
Which means, of course, that if you want to decrease the artery-clogging saturated fats (should that be what you want to call them) in your blood, a low-fat, high-carb diet, the very diet almost every health care professional recommends for the job, isn’t the way to do it.  All you have to do is simply follow a low-carb diet.
The description of what happens to saturated fats in the blood during a low carb diet took two pages out of a 300 page book, so you can imagine how much content the entire book contains.
There is so much invaluable information in this book that I’m having to fight back the impulse to quote the whole thing.  You’ll learn
why you need more sodium on a low-carb diet and why the sodium prevents lean tissue loss,
why you need to increase fat intake during maintenance,
why a low-carb diet decreases inflammation,
why the low-carb, high-fat diet improves gall bladder function,
why excess carbohydrate converts to saturated fat and how,
what all the lipid parameters mean and how they’re affected by a low-carb diet,
and what the Paleolithic evidence tells us about diet.
And this list is just scratching the surface.  As I read this book, I kept marking parts that I needed to use for this blog.  In going back through, I would have to practically reprint the whole thing to give you just the important parts because the entire book is a gem.
Unlike most traditional diet books, The Art and Science of Low Carbohydrate Living doesn’t contain a lengthy section on how to execute a low carb diet.  There are plenty of books out there – some written by MD and me – that do that.  The book does have about 10 pages of the authors’ favorite recipes for low-carb foods and a seven day meal plan incorporating many of these recipes. (Another disclosure:  The authors recommend Protein Power as a good book on low-carb dieting, but I would have written this review the same had they never mentioned our book.)
The strength of this book isn’t in its meal plans and recipes, although those are delicious, it is in the wealth of information about all aspects of low-carb dieting.  If you have a question, almost any question, about any facet of low-carbohdyrate dieting, this book will have the answer.  And the answer will grounded in science, and in many cases from work done by these two scientists on the front lines of low-carbohydrate research.
As far as I am concerned, if you are planning on going on a low-carb diet and can afford only one book, make The Art and Science of Low Carbohydrate Living that one book.  If you are a long time low-carber, this is the one essential reference book you should have on your shelf.
If you are getting going on a low-carb diet the first part of this year, grab this book before you do another thing.  Once you see the world of benefits that will accrue to you from following such a diet, you will probably be able to overcome any depression that may have been inflicted on you from my last post.  So don’t hold off, grab a copy of this book today.  You will be very glad you did.