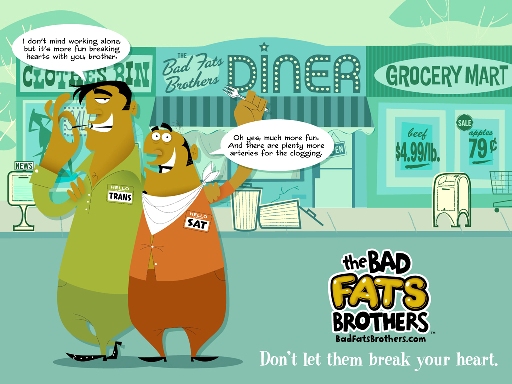 What if you were terrified of having rats in your house, so you brought in a snake to get rid of them. Unbeknown to you, the snake happened to be pregnant, and next thing you knew, you were overrun with snakes, which you found more frightening than the rats. You took steps to start getting rid of the snakes, but then here came the rats back in full force. Now you want to get rid of both of them.
This is the situation the American Heart Association (AHA) and other saturated-fat phobic groups find themselves in with trans fats and saturated fats. They campaigned relentlessly to scare people away from saturated fats, and all the restaurants and food manufacturers complied by switching to trans fats. Then the AHA and friends realized that trans fats were worse than saturated fats, so they mobilized to get them banned.
Before they were through patting one another on the back for a job well done, it dawned on them that if restaurants and food processors couldn’t use trans fats, they would all go back to saturated fats. Why? Because there are cooking properties that only saturated fats and trans fats have. If you can’t use one, you’ve got to use the other.
Now the AHA has started anew its anti-saturated fat message, but this time including trans fats. They call these two the bad fat brothers, Tran and Sat, and have created an animated program to demonize both of them. (Click here to view.) And, they’ve even resorted to the old clogging-your-arteries imagery even though by now anyone with any sense knows that’s not how coronary heart disease works.
Problem is that it isn’t going to work. Many foods don’t taste right if they’re not prepared with either trans fats or saturated fats. McDonald’s French fries, for example. McDonald’s – at least to this point – has opted to stick with the trans fat instead of going back to beef tallow because they want the fries to taste like McDonald’s fries. If they used peanut oil to fry them in, they wouldn’t be the same.
As you might imagine, I find the whole thing idiotic. There is no evidence that saturated fat does squat to us healthwise, other than maybe make us a little healthier. Saturated fat raises HDL levels and lowers the level of Lp(a) [pronounced L P little a], which is a putative risk factor for heart disease.
If we eat too many carbohydrates, our bodies convert the excess to palmitic acid, a 16-carbon chain saturated fat, which happens to be the exact fat that ‘experts’ deem the most ‘dangerous’ in that it raises LDL levels the most. We’re always encouraged by these types to avoid foods rich in palmitic acid, yet palmitic acid is the very fat our own bodies produce when our won bodies make fat. Let’s give nature a little credit. Do you suppose that our bodies were molded through eons of natural selection to crank out a fat that is dangerous to us when the same forces could just as easily have designed us to produce stearic acid (an 18-carbon chain saturated fat that has been shown to lower cholesterol levels) or even an omega-3 fat? The name of the natural selection game is survival, not suicide.
The AHA breathed life into the saturated fat monster and is now haunted by it. And I am having a great time watching them try to wriggle out of the mess they needn’t have created to begin with.
The first thing they should do is kill off Sat, preferably by some disorder caused by an immune system failure secondary to not enough saturated fat in his diet. Then concentrate their efforts on getting rid of Trans and replacing him by a superhero called Sat Man. Don’t hold your breathe, though.
(Hat tip for putting me on to this: Cindy Moore)