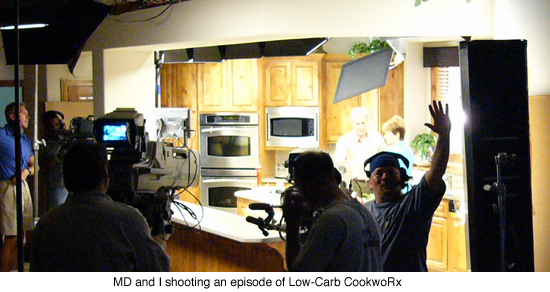 The day after Labor Day (six days from today) our new book comes out, and our publisher finally gave us permission to excerpt it.  I’m going to post the entire introduction so you’ll know why we came to write this particular book.
The story you will read will be true and the names won’t be changed to protect the ‘innocent.’  Until the events transpired that you will soon be reading about, I was not especially a proponent of fast weight loss.  I mean a low-carb diet will make people lose weight quickly, but that’s not what I’m talking about.  I’m talking about the people who used to come into my office saying, “I’ve got my high school reunion in a month.  How much weight can I lose by then?’  I always considered these as fairly ludicrous requests because the requesters clearly weren’t concerned about health issues, but simply about how they would look in the short run, without an eye to maintaining their lifestyle.
As a consequence of dealing with so many of these patients, I really developed an aversion to the notion of quick weight loss to meet some sort of deadline where appearance counted.  But, as with so many things in life, it’s easy to pontificate until you find yourself in the same position as the people to whom you’re pontificating.
Go ahead and read this excerpt so you can see what I’m talking about, and we’ll pick up this conversation after.  This excerpt is from the manuscript version and not from the actual book so there may be slight differences, if you’re comparing the two.  I used the manuscript version because I could paste it in – had I used the actual book version I would have had to type it in.

Bob Hope famously quipped that middle age is when your age starts to show around your middle, and the audience always obliged him with a hearty laugh.  But for millions of adults the sad irony of the middle-aged middle is anything but funny.  Except for a select few metabolically-gifted individuals, crossing the threshold into middle age heralds the beginning of a battle of the bulge that seemingly never ends.  Granted some reach that threshold sooner than others; some acquiesce to the larger belt and the broader silhouette with some degree of aplomb, while others rail against time and fate. They take up and discard first one diet and exercise program and then the next in a frustrating quest to recapture the slender waist they can still recall, but no longer see in the mirror.
We’ve spent the majority of our medical careers helping people of every description with just this battle, combating overweight and weight-related health issues.  Although some were in their teens and twenties and some were in their seventies and eighties, the vast bulk of the many thousands of patients we guided to better health and lower weights were in middle age.  What we learned from these many years in the diet trenches is that middle-aged weight is stubborn; it’s different to deal with; it doesn’t respond readily to modest dietary changes or the incremental increases in exercise usually recommended by the purveyors of received medical and nutritional wisdom.  The factors driving middle-aged weight gain—which really does go straight to the middle—are like a perfect storm, metabolically speaking.  A confluence of changes in hormones, stress, lack of sleep, alcohol intake, medications, fat and cholesterol phobias, and a mountain of other nutritional misinformation combines to create a mid-life tsunami that seems to swamp the metabolism and fill every nook and cranny of the middle of the body with fat.
For more than twenty years we have researched this area of science, refining the tools to deal with it effectively, writing about it, lecturing on it, so you’d think that our expertise would make protect us from the tsunami, if it came our way.  But it didn’t.  Like everyone else, when the middle-age wave hit, we found ourselves floundering in the tide, paddling as fast as we could, and still not making much headway.  At least not until we dug back into the medical bag of tricks we had used with success in our middle-aged patients and applied them to ourselves.  Here’s how it all began.

MD and I have been on a low-carb diet (sometimes stringently; sometimes not so stringently) for about the last 25 years, so some may take this story to be a repudiation of such diets, but it isn’t.  Our diet wasn’t really at fault; it was the inexorable creep of time that caused the problem.
As we age, things change.  What worked 25 years ago, doesn’t work exactly as well now.  Especially when we get a little sloppy with it.  One of the problems with carb restriction is that people who do it for a while, get good at it.  They become experts at both abiding by the carb restriction yet consuming a lot of calories and tending to overlook small carb indiscretions—a small piece of bread at dinner, just a bite or two of dessert, an extra glass or two of wine or beer—that they would have scrupulously avoided during the first heady days of low-carbing.  We were certainly experts on low-carb diets and we fell into those traps.   And time marched on making us even more susceptible to little indiscretions and to carb creep.
Now, we never came close to Orson Welles or Mamma Cass proportions – in fact most people would have described us a slim – but we had picked up little middle-aged middles.  So we set out to lose them.  Fast.  To do so, we relied upon our 25 years in clinical practice, pulling out every tool we had learned to help solve stubborn cases of middle- aged overweight.
As we describe in the book, the kind of fat people pack on around their middles in middle age is different than fat packed on earlier in life, which is both good news and bad.  Middle-aged fat is, by and large, visceral fat, the kind that accumulates within the abdominal wall and around the organs.  The bad news is that it is a dangerous kind of fat – the good news is that it’s relatively easy to lose.  Especially if you do it the right way.  Which is why you can make enormous strides in only six weeks even if you have a lot to lose.
Although it does contain plenty of information you’re not likely to have read before, this book isn’t intended as a giant treatise on everything known about health and weight loss.  It’s, quite simply, a primer on how to get rid of middle-aged abdominal fat fast and safely.  We solved our own problem.  I hope those of you who grab a copy and give it a try achieve the success that we did.  And I hope you give us your feedback so that we can improve future editions.