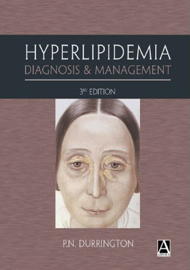 I received an email today containing the December edition of the E-newsletter from the International Atherosclerosis Society. Right there on the first page was a announcement for a new book and a link to Amazon.com for it. The new book is

The review of this book states the following:

The third edition of this well-received text provides a state-of-the-art treatise on modern clinical practice relating to hyperlipidaemia and lipoprotein disorders, conditions responsible for a huge amount of morbidity and mortality in Western countries and, increasingly, the developing world. The clinical evidence underlying the treatment of hyperlipidaemia has burgeoned since the second edition published in 1994, with the publication of the results of several clinical trials on statin drugs, and the subsequent appearance of national and international guidelines for cholesterol lowering in coronary prevention. There has also been considerable development in the definition of cardiovascular risk, and the methodology for identifying high-risk patients. [My italics]
All of these aspects are addressed fully in the new edition. In addition, the book offers helpful summaries of the background biochemistry of lipoprotein metabolism and atherosclerosis where relevant, putting the subject in the context of its pathophysiology and epidemiology. The text relating to clinical aspects has a strong evidence base, reviewing, in particular, areas of uncertainty and controversy. Drawing on the wealth of experience of the author, and representing his widely respected views on the subject, readers will find this comprehensive, well-referenced and accessible book invaluable.

This book was written by: Paul N Durrington BSc, FRCPath, FRCP, FMedSci, FAHA, Professor of Medicine, University of Manchester, Division of Cardiovascular and Endocrine Science, Honorary Consultant Physician to the Manchester Royal Infirmary, UK.
When you take a gander at Dr. Durrington’s impressive list of merit badges you may notice that paid consultant to Pfizer (the maker of Lipitor, the most widely prescribed statin drug) is not among them. Yet when you read the disclosures on one of Dr. Durrington’s recent papers you can see that it says that he has

received travel expenses, payment for speaking at meetings, and funding for research from Pfizer.

I wouldn’t say that Dr. Durrington is a totally unbiased author. In fact, I would imagine Dr. Durrington promotes statin drugs quite avidly. I’m not going to drop the $75 or so it takes to find out by purchasing his book, but I would bet a pretty substantial sum that he is a statinator of the first order.
It just stuns me that an worldwide group of scientists such as the International Atherosclerosis Society would promote a book by stating that hyperlipidemia and lipoprotein disorders are “conditions responsible for a huge amount of morbidity and mortality in Western countries and, increasingly, the developing world” when the whole idea that lipids cause any problems whatsoever is still at the level of an hypothesis. Dr. Durrington has written a 400+ page text, highly touted in the cardiology community, expressing what is an hypothesis as fact. And recommends treatment that has not been shown to be effective for the vast majority of people receiving it, a treatment that is not without severe side effects including death.
As long as statin drugs are a $30+ billion industry, this is the kind of propaganda we’re going to get posing as legitimate medical textbooks. These are the books young physicians-in-training are learning from. Think about that. And shudder.