Sticking to the plan South of the Border 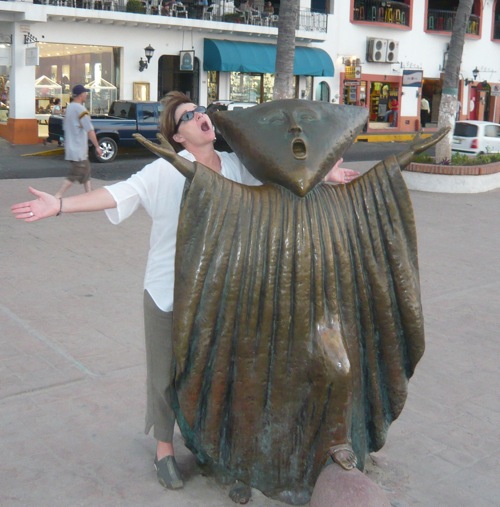 MD loves to sing and does so every chance she gets.  Our trip to Mexico has really given her something to sing about.  She is joyous because even here it’s possible to stay on a low-carb diet.   Not only possible, but pretty easy.  And a good low-carb diet at that.
Since everyone seems to enjoy photos of good low-carb food, I decided to put up our day’s worth of eating today so that everyone can see the kinds of low-carb foods available in Mexico for not much money.
The only real problem we encountered was that at almost every restaurant we were presented with chips, salsa and guacamole when we sat down.  It’s tough not to dip a few chips and eat them, especially since they’re the greasy tortilla strips cooked in lard.  When we first got here, we ate a few just to quench our lust for them.  But then were able to simply let them sit there.
Breakfast this morning was a great omelet that had everything in it.  Chorizo, ham, green peppers, onions, mushrooms, tomatoes – the works.  It came with some potatoes and a little tortilla cup of refried beans.  I avoided the potatoes and left the beans alone.  It wasn’t a great sacrifice because I’ve never been a big fan of refried beans.  Besides, the omelet was pretty huge and totally filled me up.  And it was a good thing I tested the red sauce before I slathered it on the omelet, which was my first impules.  It was muy caliente.  At least as hot as Tabasco.  So I used only a little. 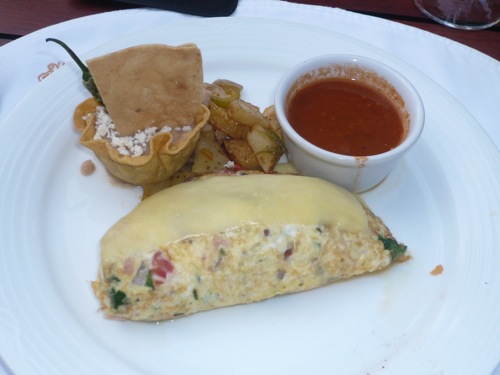 At lunch we had a real treat.  We started with a bowl of gazpacho.  It was my first time to have gazpacho in Mexico, and I was absolutely delighted to discover they do it here in the Andalusian way.  I love my gazpacho chunky instead of non-chunky.  In the US you never know how you’re going to get it, but you do know it’s going to come all in one bowl already put together. I always hope it’s going to be the chunky variety.
A few years back MD and I were just starting off a trip through Spain with a visit to Seville.  We stopped in a little restaurant for lunch, and I noticed gazpacho on the menu.  I ordered a bowl, hoping against hope that it would be the chunky variety.  When the waiter came bearing the soup and sat it before me, I was muy disappointed because there wasn’t a chunk in sight.  In fact, it looked kind of like the Campbell’s cream of tomato soup I had grown up on as a kid.  Then came the next waiter carrying a cloverleaf kind of a serving dish with each of the little leaves filled with chopped up stuff.  In one there were finely chopped tomatoes, in another, chopped cucumbers.  Another was filled with chopped onions, and the last was filled with chopped green peppers.  The waiter held the serving piece before me, and I ladled out as much of each of these as required to make my gazpacho as chunky as I wanted it.  Then the waited put a little dollop of sour cream right on top.  I took a bite and thought I had died and gone to heaven.  The soup was piquant, but its acidity was set off nicely with all the chunks of fresh vegetables.  For the rest of the trip, we went to only restaurants that had gazpacho on their menus.  I couldn’t get enough.
When we got home, I raced to the bookstore to get a cookbook with a recipe for Andalusian gazpacho.  I found a couple, noticed that the recipes both looked about the same, bought the best looking one, and brought it home.  I badgered MD until she finally made the stuff.  I, myself, finely chopped all the stuff to go in the base.  When it was all ready, I filled my bowl with the soup, spooned a bunch of the chopped stuff in, and took a spoonful.  It sucked.  It didn’t compare to the Spanish variety.
We tried a few more iterations of the recipe (and tried some others we had found in different Spanish cookbooks), all of which didn’t come close to matching up.
We had a chef friend who was a culinary genius and who had grown up in southern Spain.  We told him about our misadventure with the gazpacho making and asked him if he had a recipe for Andalusian gazpacho.  He more or less gave us a slight variation of the same recipe we had been trying without success.  We told him that we had tried the recipe and it didn’t match up to what we had all over southern Spain.
After thinking for a minute, he said, “Ah, I know what the problem is.”
He told us that tomatoes grown in Spain tasted much different than tomatoes grown in the US.  Spanish tomatoes, due to the different soil they’re grown in, have a different level of acidity and a different taste.  He asked us to let him fiddle with it for a while to see if he could come up with a way to add some ingredients to the mix to make the US tomato base taste like the Spanish one.
In a week or so he sent us a new recipe.  It wasn’t simple.  MD went to work on it and cranked out some gazpacho that was as good as the Spanish version.  She makes it for special occasions now (or when I whine enough for it), and it never fails to be a huge hit.  My contribution is to always chop the stuff because I don’t think she ever chops it fine enough when she does it.  I got the job with the admonition, “If you don’t like the way I do it, do it yourself.”  And I have ever since.
The gazpacho served in the restaurant in Mexico was Andalusian style, and was good.  But it wasn’t as good as the Spanish version or as MD’s version.
Here is how it comes to the table.  It came with only three chopped vegetables instead of the four I’m used to, so that was a strike against it. 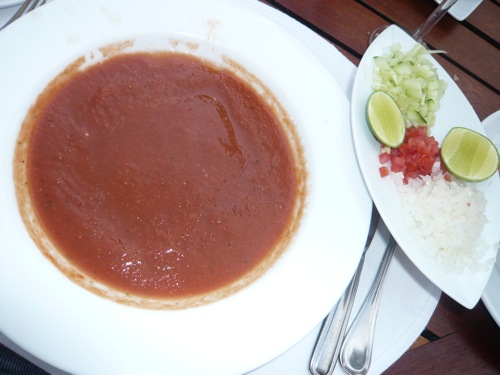 Here is what it looks like all loaded up.  Plenty chunky for me. 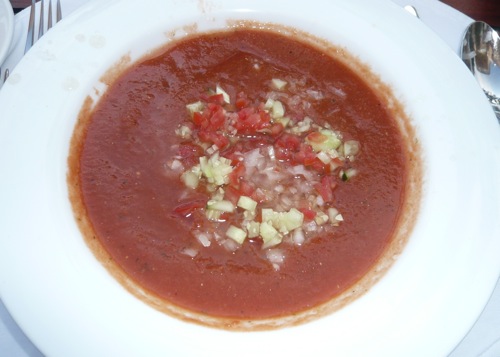 After the gazpacho came the main course for lunch: ceviche made with octopus, shrimp and mahi mahi.  It was fresh and stunningly delicious.  I could have eaten three more bowls, but I didn’t.  I can never get enough good ceviche, and this one was outstanding.

For dinner we started with salmon carpaccio.  I didn’t really know how it was going to be when I ordered, but it ended up being superb.  The tiny slice of toasted bread in the middle of it is a slice of bagel that is probably one eighth of a bagel.  It contained I would guess about 4 grams of carb, and I ate every one of them.  This terrific carpaccio cost about $8.  It would have cost at least twice that in the US. 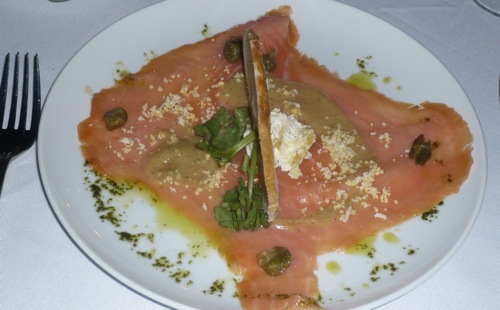 The next item I chose was called a Two Oceans Broth, and was made of clams and mussels.  Since it was called a broth, I assumed it would be a clear soup.  I was disappointed when it came, and I realized it was a cream-based soup – both sides of it.  I don’t have anything against cream-based soups – I’m just not crazy about them.  It was nice to behold and great tasting, but I didn’t eat all that much of it.  I fished out the clams and mussels and ate them, but ate little of the soup. 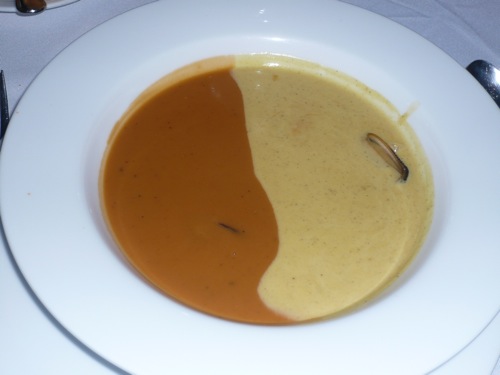 The final course was a pistachio crusted tuna with mashed potatoes and vegetables.  I told them to hold the papas and give me some extra legumbres, which they did.  It was as good as it looks. 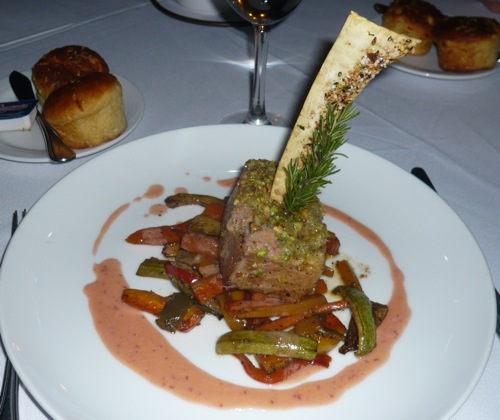 You will notice a couple of dinner rolls in the back on the left side. And you should also notice that they are untouched and remained that way for the entire meal.  We had no dessert and no coffee.  Just some agua minerale con gas (sparkling water) and a little wine.
The wine was a Mexican sauvignon blanc made in Baja California.  I was a little hesitant to order it

because I couldn’t imagine a Mexican wine being much good.  I was pleasantly surprised as this one was quite delicious.  We each had about a glass and a half.  I had the waiter leave the empty bottle so I could photograph it for this blog and to remember what it was so that I could try to get some back in the states.  It was that good.  Kind of piquant and crisp, just like I like a sauvignon blanc to be.
So there you have it.  Low-carb Mexican style.  And for not much dinero.  The Two Oceans Broth cost about $8.50, which is less than a comparable bisque would cost at home.  The tuna set me back about $15, which is far less than such an entre would be anywhere in the US.  The wine was less than $4 per glass.
As you can see, there is no reason to avoid traveling to Mexico because you’re worried about your diet.  You can eat low-carb here for less probably than anywhere in North America.  Go for it.
Note: For those of you who have comments languishing in comment purgatory, don’t despair.  I’ll get to them soon.  I have a long flight and a long wait in the airport, so I can get to them then.  Assuming, of course, that wifi is available.  But if not, I have some time over the next day or so.  Sorry for the delay.