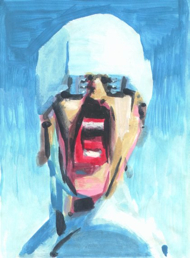 I received a comment today that I feel compelled to post in its entirety as a cautionary tale for anyone contemplating going on statins (or any other drug, for that matter) for no good reason. This reader describes in much more detail than I ever could the agony of drug therapy gone wrong. And the realization that it was unnecessary drug therapy in the first place makes the experience even more devastating. I hope enough of you who are readers of this blog now realize that simply having an elevated cholesterol level is no reason to go on a statin.
The comment below demonstrates in vivid detail what happens thousands of times per day all over this country. People are prescribed drugs for the flimsiest of reasons. These drugs cause side effects. These side effects are treated with more drugs, which themselves cause more side effects. Which are treated with yet more drugs.
When patients go to a doctor for symptoms, the doctor feels the need to treat the symptoms. Often the symptoms can be treated by having the patient discontinue the drugs that caused the symptoms in the first place. But I can’t tell you how many times I’ve seen a variation of what happened to this unfortunate commenter. The symptoms are simply treated by prescribing another drug designed to quash those symptoms.
Let the story below be a warning against taking any drug for minor symptoms. And don’t take a drug for a lab value that’s a little out of the ordinary and not even causing you symptoms. Remember, in the vast majority of all people, statins have been shown to provide no benefit in terms of decreased all-cause mortality. And in those where some benefit has been shown – men under the age of 65 with a history of a heart attack – the benefit isn’t all that great. Don’t let yourself in for a lot of trouble by taking a drug that provides you with no value.