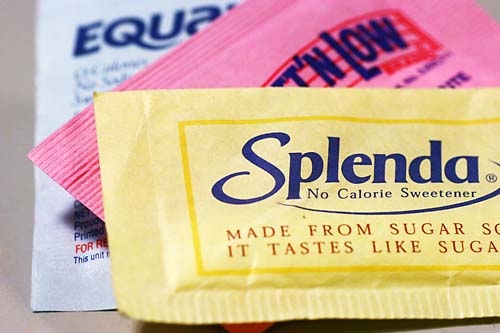 Do you know what your children are eating?

So asks the ubiquitous anti-Splenda advertisements.
These ads go on to say:

Splenda’s advertising claims that it is “Made from Sugar, so it Tastes Like Sugar.” What it doesn’t tell you is that Splenda is not natural, it’s a chlorinated artificial sweetener.

Since rational people don’t want to send their kids off to school with a lunch box full of swimming pool disinfectant, these ads have gotten a lot of attention.
What is the real truth behind the Splenda and chlorine? Let’s look at the evidence.
But before we do, I want to lay out my position. First, MD and I don’t own any stock in the companies that manufacture or sell Splenda. We don’t sell it. We have no financial involvement with Splenda in any way. Second, we do use it. We don’t use a ton of it because we would rather do without sweets of any kind as much as possible. But, when we do want to sweeten something, we use Splenda as our artificial sweetener of choice. Unlike aspartame Splenda is heat stable so we can cook with it, and unlike aspartame it doesn’t break down into toxic substances. In fact, very little of it is absorbed. And we have never had patients who had problems with Splenda as we have had with aspartame. We first found out about Splenda in Canada back in the mid 1980s when we attended a medical conference in Toronto. Splenda was in use at that time in Canada and has subsequently been approved for use here in the U.S., and since then tens of millions of people have used it without major problems showing up. We have never seen anything in the medical literature showing that Splenda is in any way harmful. So, we don’t have a problem with Splenda, and until we find something that changes our minds, we’ll continue to use it as our artificial sweetener of choice.
Now on to the Splenda attack ads.
These ads are the brainchild of Rick Masters, a former Democratic operative who has gone into the public relations business. He was profiled last March in the Atlantic Monthly in an article entitled “J-School for Jerks,” which was a piece about how Mr. Masters conducts a course for people who want to be the next Bill O’Reilly. Mr. Masters works for Qorvis Communications, a large, Washington, DC based public relations firm.
Qorvis Communications and Mr. Masters were hired by non other than the sugar lobby to mount an attack against Splenda. Why the sugar lobby would want to attack the folks who make Splenda, I can’t imagine.
Mr. Masters and “a group of concerned consumers, led by sugar cane and sugar beet farmers across America” (read: Sugar Association, the sugar lobby) put up a website purporting to tell the horrible truth about Splenda. But does this website tell the truth or is it simply sugar lobby propaganda? Let’s take a look.
We can forget about all the posturing and all the doctors and others who are on the site claiming that Splenda is a menace because that’s all lip service. Let’s cut to the chase, to the real nitty gritty.
The main attack against Splenda is that it is a chlorinated artificial sweetener. Is that true? Well, yes and no. It is chlorinated, which, as we’ll see shortly, doesn’t mean squat. And it is really a sugar molecule, so it really isn’t an artificial sweetener as is, for example, saccharine. It’s artificial in the same way a bowl of ice cream with artificial flavors added is artificial. The bulk of the ice cream is made with cream, milk, and sugar, so does the little bit of artificial vanilla extract make the whole shebang artificial? I don’t think so. But in Splenda’s case, the additive isn’t even really artificial.
But what about the chlorine? That sounds like the real problem. It can’t be good to consume chlorine.
First of all, every time you eat salt, half of what you are eating is chlorine. Common table salt is sodium chloride, half sodium and half chlorine (since the chlorine is in its ionic form it’s called chloride). Chloride is a natural substance. In fact chlorine is one of the elements in the periodic table. No one would consider salt artificial, so how can chloride – a natural element – be artificial?
So, Splenda isn’t really an artificial sweetener. If anything it would be more accurately called a chemically altered sweetener.
Splenda is made by replacing three hydroxyl groups (and oxygen-hydrogen combination) on a sucrose (common table sugar) molecule with three chloride ions. By doing so, the sweetening power of the sugar is increased by a factor of about 600. So, in actuality, when you consume Splenda, you consume real sugar, but because of the huge increase in sweetening power only about 1/600th of what you normally would . Instead of a teaspoon it would be a tiny grain.
But what about the extra chlorine? Doesn’t that cause any kind of problem.
Well, you do eat salt don’t you. A teaspoon of salt contains many thousands of times more chlorine than you would get from the teaspoon of sugar equivalent of Splenda.
If you want even more evidence that the tiny amount of chloride in the Splenda is harmless consider that like with blood sugar you have about a teaspoon of chloride circulating in your blood at any given time, which is more than 20,000 times the amount you would get from a dose of Splenda. How do we figure this?
A normal value for chloride as a component of an electrolyte panel (common lab measurement of blood that doctors often look at) is about 100 mEq/L. One mEq of chloride equals about 35 mg. 35 mg times 100 equals 3500 mg. One teaspoon is about 4000 mg, so 100 mEq of chloride is a little less than one teaspoon.
So, knowing what we now know, it’s easy to see who is telling the truth about Splenda. With the above in mind, let’s look at a particularly egregious example of truth stretching on the sugar lobby-underwritten, anti-Splenda website:

Fiction: The chlorine found in Splenda is similar to that found in other foods we eat.

Fact: The manufacturer of Splenda claims that chlorine is naturally present in such foods as lettuce, mushrooms and table salt, but they never directly state that eating Splenda is the same as eating these foods. Remember, Splenda is not a natural substance, it is an artificial chemical sweetener manufactured by adding three chlorine atoms to a sugar molecule.

Would you trust your health to the sugar lobby?