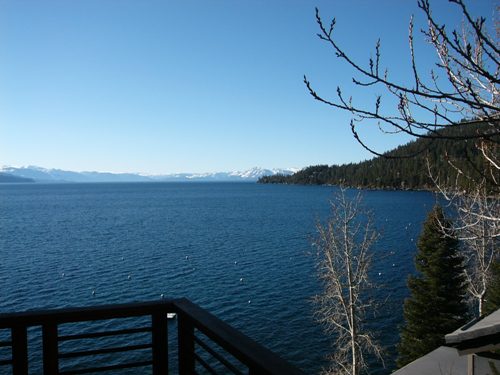 View from our back deck just after sunrise.
I haven’t been pounding away at the computer like normal because the kids and grandkids have been visiting. We all took the grandkids skiing for the first time, and I never thought it would be fun to stand around on the bunny slope while two little boys took their first floppy-legged runs on skis, but it was. After a few days, they both were doing pretty well, and having a big time doing their pencils (skis parallel) to go fast and their pizza pies (snow plows) to slow down, turn, and/or stop. Great fun! But, alas, over. The little ones and parents took off for Dallas leaving us with our great views, but bereft of babies and their constant childstorms of activity. It was the empty nest syndrome written large all over again.
To keep from feeling sorry for myself I began plowing through my stacks of unread newspapers. I came upon an opinion piece in last Sunday’s New York Times on, of all things, the virtues of monosodium glutamate (MSG).
In 1906 a Japanese scientist, Kikunae Ikeda, discovered monosodium glutamate when he was trying to isolate the specific molecule for the intense flavor of an Asian broth made of kombu seaweed.

In his laboratory, he isolated the natural glutamates in the seaweed, and to their marvelous taste he gave the name “umami,” derived from the Japanese word for “delicious.” His work led directly to the industrial manufacture in Japan and then worldwide of MSG.

Another way of saying ‘umami’ is savory. Years ago one of my heroes, John Yudkin, posited that along with the traditional four tastes everyone is aware of – salty, sweet, sour and bitter – there is one more: savory. I agree. There is a unique taste that can’t be made by any combination of salt, sour, sweet and bitter, a taste that we experience when we eat a delicious steak or a perfectly grilled stalk of asparagus or an aged piece of Parmigiano cheese. It turns out that the savory, or umami, receptors can be stimulated by pure monosodium glutamate.
This fact has not been lost on American food manufacturers who have, as they have with sugar and trans fat, put the pedal to the metal in adding monosodium glutamate to snack foods. They figure that if it’s a taste we all love and it can be provided by an inexpensive additive, why go to the bother to prepare fresh foods in such a way that the natural savory taste comes out thanks to cooking technique and selection of ingredients? It’s the American way, after all. If you want sweet, we’ll give you sugar. If you want even sweeter, we’ll give you high-fructose corn syrup. If you want salty, we’ll give you salt. And if you want savory, we’ll give you monosodium glutamate.
According to the Times article, monosodium glutamate is an essential seasoning along with salt, soy sauce, and vinegar for any Asian cook worth a flip. In Asia, that is. In the United States everyone is off of monosodium glutamate like a dirty shirt. Why? Because about 40 years ago the New England Journal of Medicine published published a letter from a physician who claimed that eating in a Chinese restaurant gave him palpitations and numbness. Since one of the big differences between Asian and American cooking at the time was the use of MSG in the former, the conclusion jumped to was that the MSG must have caused the symptoms. The title the editors gave to this letter: “Chinese Restaurant Syndrome.” It’s been with us since.
Most researchers have concluded that a little MSG, just as with a little sugar, doesn’t pose any health risk. Some zealots believe that even a molecule of it is dangerous, but I believe they’re way off base. It’s the glutamate in MSG that stimulates the the savory receptors, but the glutamate has to be stabilized with a plain old salt and water, giving us monosodium glutamate, which is about a third sodium, the rest glutamate. When we consume MSG, it is the G, or glutamate, that we taste. MSG breaks down into salt and glutamate when we ingest it. We eat many, many other things that breakdown into much more free glutamate than would be found in a whole lot of MSG. What things? Well, meat, cheese, fish and all things savory. And such vegetables as asparagus and tomatoes. If that’s not enough, the body makes its own glutamate when needed. So why worry about the tiny bit from a pinch of MSG?

While around a third of Americans say they believe that MSG makes them ill, reputable medical studies have shown that only a tiny proportion of people truly react to it, and then only when it is administered in large oral doses on an empty stomach. All this was explained, and the restaurant syndrome fully debunked, in great detail by the food writer Jeffrey Steingarten in a 1999 essay for Vogue magazine titled “Why Doesn’t Everybody in China Have a Headache?”

Several years after Steingarten’s essay, Alex Renton wrote a piece for the Guardian that takes on those finding a sinister toxin residing in the simple MSG molecule. He makes the same case as Steingarten that if MSG truly causes a problem, we would have millions of Asians suffering with it, since it is a part of their daily diet. He writes of his own views on MSG and an experiment he performed on an unwitting friend:

It is now 37 years since Dr Ho Man Kwok named Chinese restaurant syndrome, and it’s plain that the case against MSG remains unproven. So either you conclude, as some will, that government, science and the mega-corporates of the food industry really are all in league with each other to poison us for profit. Or, like me, you make a different decision.
Now, I have little faith in the food industry and I’m as suspicious of food additives as the next person – I spend many hours fighting the grim battle to keep them from my children’s mouths. But until new evidence emerges I am going to give MSG a conditional discharge. But would I have it in the kitchen? Well, I did. I bought a little bag of Ajinomoto [MSG] from the corner shop on our Bangkok street and tried it, a gram (the tip of a teaspoon) at a time.
By itself it tasted of almost nothing. So I beat up and fried two eggs, and tried one with MSG, one without. The MSG one had more egg flavour, and didn’t need any salting. I tried the crystals on my son’s leftover pieces of chicken breast (definitely more chickeny). I tried it in a peanut butter sandwich (nothing). On Weetabix with milk (interesting, sort of malty) and on Weetabix with milk and sugar (thought I was going to be sick).
My friend Nic came round. He told me about a Japanese restaurant he’d been to that gave him headaches and a ‘weird tingling in the cheeks’ – until he told them to stop with the MSG. Then he was fine, he said. I nodded and I served him two tomato and chive salads; both were made using the very same ingredients but I told him one plate of tomatoes was ‘organic’, the other ‘factory-farmed’. The organic tomatoes were far better, we agreed. These, of course, were the tomatoes doused with mono sodium glutamate.
Then we ate mascarpone, parma ham and tomato pizza. Nic felt fine. So did I. I had ingested, I reckoned, a good six grams of MSG over the day, and probably the same again in free glutamate from the food – the equivalent of eating two 250g jars of Marmite [a dark substance sold in a jar, loaded with MSG, that the Brits use as a sandwich spread–I think it’s dreadful].

This reminds me of an accidental experiment that MD and I performed on a friend who was allegedly allergic to onions, garlic and tomatoes. She said she got headaches, flushing, palpitations, and a host of other symptoms if she had so much as a smidgen of any of these foods. She was a real pain to eat out with because she grilled the waiters on all the ingredients in whatever food she was thinking of getting, telling them that she was ‘deathly allergic.’ Whenever she ate at our house, MD would make our friend’s portion of whatever was cooking without onions, garlic or tomatoes. Once MD mistakenly gave her a dish (I don’t even remember what it was now) that contained finely minced onion. Our friend ate it before MD realized her error. Nothing happened. No headaches, no sweats, no palpitations, nothing. As time went on we would give her garlic and/or onions (it’s hard to hide tomato) without effect. She stayed with us often, so we knew that the effects didn’t show up the next day either. She wasn’t really allergic, she merely thought she was.
Food allergies are real and can even be fatal. But more often than not, I suspect they are like that of our friend. Some folks are convinced – for whatever reason – that they are allergic to certain foods. If they eat these foods, and they know it, they have problems. If they don’t know it, they do fine. I suspect this is the case with most MSG reactions.
But, although I have no fear of a little bit of MSG, I would prefer to have my savory come from the actual foods prepared properly. As the Guardian writer writes:

I’ve thrown the Ajinomoto out now. It works, but it was embarrassing – a bit like having a packet of Bisto in the cupboard. There is no need to have MSG in the kitchen. If I want extra glutamate in my food I’ll use parmesan, or tomato purée, or soy sauce. Or like Mrs Ikeda, boil up some kelp.

I won’t boil the kelp, but I will use the others. And I might occasionally use a pinch of MSG if I thought it would help. I guess Ac’cent (pure Msg sold in the US as a seasoning) isn’t as embarrassing as Ajinomoto.
I agree with the Times writer:

Bad Chinese chefs, of course, just use MSG as a substitute for good ingredients and properly made stocks, just as bad American food companies cook up snack foods made from fat and carbohydrates laced with salt and sugar. But top Chinese chefs also use it, to refine and elevate flavors. There may be no need to add MSG to a delicate soup made from chicken, ham and dried scallops. But in some culinary contexts, it works wonders: a little MSG mixed with salt and sesame oil can lift the flavor of a simple bamboo shoot salad, or add a dash of ecstasy to a stir-fry of pea shoots and garlic. If you didn’t know it was MSG, you would simply find it delicious.

In the end, though, the most persuasive data I know that MSG isn’t a health hazard is that Asians, who eat the stuff by the pound, are the most long lived people on earth.  Maybe, just maybe, it’s a life extender, not the poison that so many would have us believe it is.