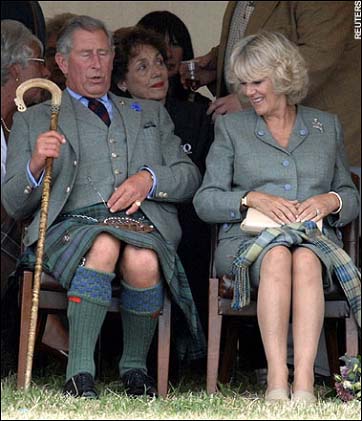 Recently Prince Charles shot his mouth off with a reporter in earshot. Seems that Bonny Prince Charles suggested to a nutritionist at a diabetes center he was visiting that she should try to get McDonald’s banned. (See here and here)
Money quote:

Prince Charles asked nutritionist Nadine Tayara: “Have you got anywhere with McDonald’s, have you tried getting it banned? That’s the key.”

Now, I would agree that banning McDonald’s would probably be a step forward in promoting good health, but I’m too much a free marketer to ever suggest such a thing. Besides, people who go to McDonald’s and make proper food selections can lose weight and be healthy. So it a choice thing, not a McDonald’s thing. McDonald’s sells crappy food, but it also sells good food, albeit in much lesser quantities than it does the crappy. But grocery stores sell cigarettes. Does that mean we should ban grocery stores?
What I find so hypocritical in Prince Charles recommending a ban on McDonald’s is that he is affiliated with a UK company that produces and sells a ton of what could easily be called junk food. Granted, it’s organically produced junk food, but your pancreas doesn’t really care. Sugar is sugar.
So says HRH Charlie:

I wanted to demonstrate that it was possible to produce food of the highest quality, working in harmony with the environment and nature, using the best ingredients and adding value through expert production. I also wanted to engender increasing funds for my Charitable Foundation, which receives all the profits through which I can then support an increasing number of worthwhile projects.

I suppose profiting from junk food, then using those profits for good causes is better than just profiting from junk foods, but…
If you navigate through the website of this company, you will find it product-heavy in the cake, pie, biscuit, and chocolate department, and sadly lacking in meat. There is some, but not much that hasn’t been processed or baked in a pie. I’m sure that if a person with diabetes dined solely on foods from this company he (or she) wouldn’t be any better off than if dining at McDonald’s.
Before Prince Charles worries about the mote in someone else’s eye, perhaps he should consider the beam in his own.