Don’t panic.  I don’t have a paid ad for the RealAge Test stretching across the top of my blog post today.  This one is for illustration purposes only.  If you are like me, however, you’ve run across this banner countless times in your online surfing.  It seems to pop up everywhere.  Or at least it used to.  It hasn’t too much lately since the big New York Times exposé, more about which later.
But first let’s take a look at something else brought to the public by the team of Roizen and Oz.  I came across this page on their RealAge website while I was googling something else.
According to these two (or their team of ‘world-renowned scientists and doctors’) we should all avoid fructose and load up on glucose, the ‘sugar that staves off hunger.’

Sugar is sugar, right? Maybe not. Turns out that there is one type of sweetener that helps fill you up, while another leaves you craving more.
The two sugars in question: glucose and fructose. Glucose appears to quell hunger, and fructose seems to ramp it up.
The sugars may affect your appetite differently because of the unique ways in which they affect malonyl-CoA, an important appetite-suppressing molecule in the brain. Glucose causes malonyl-CoA to rise, resulting in less food intake. Fructose, on the other hand, lowers malonyl-CoA, resulting in more food intake.

The implication of their message is that if you eat glucose you won’t be hungry, but if you eat fructose you will.  They go on to discuss how important it is to cut fructose from the diet since fructose makes you eat more.  And, by implication, to add glucose.
I agree that we should all cut most of the fructose from our diets, but not for the reasons these guys (and their team of purported experts) give.
I would assume that both of these docs went to medical school and had many years of post-medical school training.  I would also assume the same about their ‘world renown’ staff of experts.  What I don’t understand, then, is how they can make such stupid statements that have no grounding in actual biochemistry.
The ‘important appetite-suppressing molecule’ under discussion is malonyl-coenzyme A (malonyl-CoA), which is one of the major signaling molecules in the body.  Malonyl CoA sits at the crossroad of fat storage and fat burning and drives the reaction one way or another.
If we’ve eaten a lot, especially a lot of carbohydrate, malonyl-CoA levels increase.  Increased levels of this substance then shift the flow of fat away from burning and toward storing.  Among its activities, Malonyl-CoA stimulates fatty-acid synthase (FAS), the enzyme that converts carbohydrate to fat.  And it inhibits the enzyme (CPT-1) that carries fat into the mitochondria where it is burned for energy.
If we haven’t eaten, or if we have been eating a low-carb diet, the opposite happens.  Malonyl-CoA levels are low, which removes the inhibition of CPT-1.  Fat is shunted away from storage in the fat cells and instead is transported into the mitochondria where it is burned.
Since malonyl-CoA is one of the main substances in the body that determine what happens to fat, it would make sense that this molecule would somehow be involved in the regulation of hunger.  Elevated malonyl-CoA levels indicate that we’ve got plenty of fuel aboard and that the body is in the process of getting it stored away, so it would stand to reason that these elevated levels may affect the hunger centers in the brain, sending the message not to eat any more.
Researchers have looked into this notion, and it indeed appears – in rodents, at least – that elevated levels of malonyl-CoA do suppress the hunger centers in the hypothalamus.
If you do a quick thumb through any decent medical biochemistry textbook looking for what makes malonyl-CoA go up, you’ll find that it is driven up by insulin and glucose, the surrogates for being well fed.  But here is where Roizen/Oz and the team of experts go off the rails.  The glucose in question isn’t dietary glucose – it’s blood glucose.  As I’ve written about before, the entire amount of glucose we have circulating through us if we have a normal blood sugar level is around 4 grams, a little less than one teaspoon.  If we eat a medium-sized baked potato, we ingest about 50 grams of glucose (potato starch is made of pure glucose), which is more than ten times the amount regularly circulating in our blood.  Our bodies quickly deal with this excess by increasing insulin and driving the glucose into the cells.  As a practical matter, dietary glucose never really impacts malonyl-CoA.  What does impact it is the level of blood sugar.  So if blood sugar is higher than normal, then more malonyl-CoA is made, and more fat is stored.  Which is one of the reasons type II diabetics are usually obese to some extent.  These people have the double whammy of too much sugar and, since they’re almost always insulin resistant, too much insulin.
Any readers who have type II diabetes will have increased levels of malonyl-CoA.  I will ask those of you who have this condition: are you less hungry?  I didn’t think so.  Despite the fact that in rodents (and probably in people who are normal weight) malonyl-CoA may suppress hunger, it doesn’t seem to do so in those who are overweight and insulin resistant.  It may a little, but there are other forces driving hunger more than the malonyl-CoA suppresses it.  And in any case, it doesn’t have anything to do with dietary glucose – a fact our illustrious crew of ‘world renowned’ experts should have known.  Their implying that adding glucose to one’s diet will decrease hunger is just plain stupid.
But let’s look at something a little more sinister than just plain ol’ stupid.
These same guys are behind the RealAge test that (until fairly recently) was popping up every time you turned on your computer.  I saw the ads for this test over and over and over again, and I wondered what they were selling to justify the huge expense such unremitting advertising requires.  Then I read a New York Times article that explained it all.
As it turns out, the RealAge test is a means for Roizen/Oz et al to gather health information from those who take the test.  I’ve taken the test, which requires many pages of questions, and discovered that I am about 8 years younger than my chronological age.  I also discovered that I would be younger yet if I didn’t eat so much red meat.  You can guess how to perform well on the test: tell them you eat no red meat and a lot of soy.  (My choices on the red meat were: no red meat; red meat once per week; or red meat more than once per week.)
During the course of the test, after a long list of medical problems that are to be checked if the test-taker suffers from them, this question pops up: 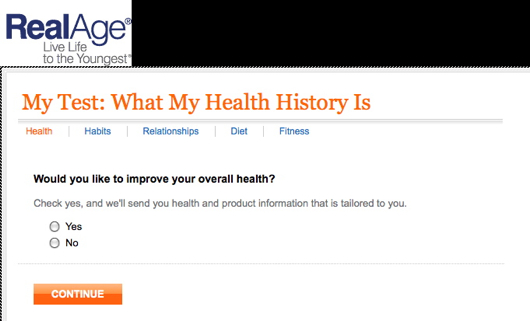 If the answer is yes, you may be bombarded with information from various pharmaceutical companies that make drugs to treat the checked diseases. Or if, according to the Times, you decide to become a RealAge member.
Yep, that’s right.  These guys who seem so compassionate and are giving away their RealAge test (after capturing your email address) and providing all kinds of lifestyle change recommendations are really capturing your info and peddling it to Big Pharma.  Which, of course, is how they can afford the many ads for their ‘free’ RealAge test.
Says the NY Times:

But while RealAge promotes better living through nonmedical solutions, the site makes its money by selling better living through drugs.
Pharmaceutical companies pay RealAge to compile test results of RealAge members and send them marketing messages by e-mail. The drug companies can even use RealAge answers to find people who show symptoms of a disease — and begin sending them messages about it even before the people have received a diagnosis from their doctors.
While few people would fill out a detailed questionnaire about their health and hand it over to a drug company looking for suggestions for new medications, that is essentially what RealAge is doing.

Pretty sleazy, if you ask me.
They still provide their RealAge test, but as far as I can tell, only if you go to their website.  They are probably waiting for the fallout to be over from the Times piece.  Until then, they are dragging people to their website with idiotic pieces such as the one I discuss above.  If you are googling a health problem, nutrient, diet, etc., you may come upon their website and be presented with the RealAge test.
But, if the article I read is any indication of the value of their advice, I would be real leery.  The advice may be stupid, but the strategy behind the RealAge test is definitely sleazy.