Since I seem to be on a roll writing about rear ends (politicians and fatty stools) I might as well go ahead and post this piece now that I’ve gotten all the results in. As near as I can figure, I’ve got about 7,000-8,000 people reading this blog daily, so given the percentage of people who are afflicted with hemorrhoids, this should be of interest to at least a couple of thousand. If you don’t have a hemorrhoid, if you don’t know anyone who has a hemorrhoid, and if you don’t think you will ever get a hemorrhoid, you can quit reading now.
When MD and I were in Dallas a month of so ago visiting our kids, I went to visit (as I usually do when in Dallas) a friend I’ve known for years (let’s call him Jack, not his real name). As we were talking he was squirming around on his couch, looking like he was in some kind of discomfort. I asked him if he was having a problem, and said no. At that point his wife, who was bringing us some coffee, said, “Tell him; he’s a doctor for God’s sake.” Jack then sheepishly told me that he had a bad hemorrhoid that was intensely painful. I asked him all the appropriate questions and diagnosed him as having a thrombosed hemorrhoid that needed treatment.
Jack said he would call is doctor and try to get in. I told him that I had fixed countless thrombosed hemorrhoids, and that if I had the tools I needed, I could fix it for him in a flash. I made a couple of calls and found out that I could get all the necessary equipment at a drugstore nearby. Off we went to gather the stuff. We returned with a latex gloves, a scalpel, a couple of syringes and needles, a bunch of gauze 4X4s for packing after the surgery, and a bottle of xylocaine (an injectible local anesthetic). I recruited Jack’s wife as my assistant, and we got him down on the bed. I had his wife spread his cheeks so that I could get to work. I immediately realized that I had made one of the cardinal errors of doctoring: I had failed to examine the patient before I made the diagnosis.
There are two types of hemorrhoids and two things that can happen with a hemorrhoid. There are internal and external hemorrhoids and these hemorrhoids can be inflamed or thrombosed. Inflamed hemorrhoids are typically kind of tender and itchy–those are the ones that Preparation H and the other topical agents work for because all that needs to be done is to reduce the inflammation and the symptoms pretty much go away. Often, though, the hemorrhoid is thrombosed, which means that it has a blood clot in it. Hemorrhoids are little sacks of tissue around the anal area and just inside, and these sacks contain blood. If the blood clots, the hemorrhoid becomes extremely painful and hurts all the time. It doesn’t really itch as much as it just hurts like the devil.
Here are the two types of hemorrhoids. 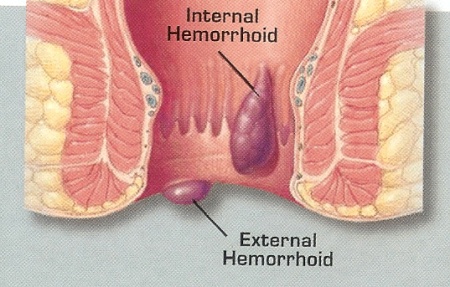 I’ve treated so many thrombosed hemorrhoids in my career that I could probably do one in my sleep. To treat them you inject them with a local anesthetic, then slice open the hemorrhoid with a scalpel and remove the clotted tissue with forceps or fingers or a cotton tipped applicator (a Q-tip in non-medical parlance). Once the clot is gone, you pack a bunch of 4X4s into the butt to absorb the blood, and let it heal. The patient gets almost immediate relief and other than a little bleeding for a day or so, the problem is gone.
Once I had  Jack’s cheeks spread, I realized that what he had was not a thrombosed hemorrhoid, but a giant inflamed external hemorrhoid along with a giant inflamed internal hemorrhoid that was strangulated out through his anus. I realized then that I couldn’t fix it with the tools at hand and that he would need see someone skilled in dealing with internal hemorrhoids that usually need to be banded, which is a pretty painful procedure. The doctor puts a little tight band around the base of the hemorrhoid that cuts off the blood supply and the hemorrhoid basically rots off. Had I examined my friend before gathering all the materials I needed, I could have saved him the $20 or so it cost to get it all.
To atone, I told Jack I would find him a doc so that he wouldn’t have to go through going to his primary care doctor, then get referred to someone else to do the banding and spend several days in agony while all the waiting for appointments went on. I looked in the phone book and found a couple of centers specializing in the treatment of hemorrhoids using a technique called infrared coagulation (IRC). I had never heard of this, so I got on Jack’s computer and started searching the medical literature to see what it was all about. I found a bunch of papers including one just recently published in the Journal of the American College of Surgeons that after evaluating all methods available concluded that IRC was the treatment of choice. IRC has equivalent efficacy as compared to banding, but is painless.
Jack called the center, the lady who answered the phone set him up with an appointment that afternoon. I went along as an extremely interested observer.
The center was the epitome of efficiency. A nurse came in and explained the process to Jack and me. The doctor then came in and asked a few pertinent questions about medical history, allergies, bowel habits and history, etc. and took us step by step through the procedure my friend was going to undergo. It was off to the treatment room where another nurse told Jack to take off his pants and shorts, put on a gown and get up on the exam table. The doc came in, got Jack on his side, and performed a digital exam of his rear end. She (the doc was a she) inserted an anoscope, a clear plastice cone-like device open on both ends into Jack’s rear end so that she could see both hemorrhoids. Grabbed a little infrared probe from the machine next to her, stuck the end of it to the base of the hemorroid for just a few seconds, and that was it.
Jack said it felt a little warm but not uncomfortable at all; it was essentially painless. She told him that it took several treatments and that he should feel a little better after each one. He felt significantly better after the first treatment, and now 4 or 5 treatments later, he is cured.
I’m passing all this along for a couple of reasons. First, I want to let anyone with hemorrhoids know that there is a painless alternative. Second, since I only have a database of one, I would like some feedback from anyone else who has had IRC treatment or who knows anyone who has so that I can feel more comfortable recommending it. If my friend’s experience wasn’t the norm, I would like to know.