Late last night I was transferring some medical papers from my old moribund PC onto my Mac when I came across an article that infuriated me when it came out.   Now it simply made me laugh, although I have to admit to at least a tinge of annoyance still.
As I’ve mentioned before, MD and I often feel like the Rodney Dangerfields of the low-carb diet biz or, worse yet, the Victor Flemings (don’t know who Victor Fleming is?   Look him up and see what he did in 1939.   And you don’t know who he is, right?).   At any rate it seems that whenever low-carb diets are mentioned in a positive way, which, fortunately, that are more and more often these day, we and/or Protein Power never make the list.   It’s always Atkins, South Beach and the Zone.   And of those three, only one is a true low-carb diet.   The other is a quasi, pansy low-carb diet, whose author goes around denying that his diet is a low-carb diet.   The other isn’t a low-carb diet, since a diet in which 40 percent of the calories are made up of carbohydrate hardly qualifies for the modifier ‘low.’   But when it comes to attacking low-carb diets, somehow we always seem to make that list.
Now that I’ve gotten that out of my system (sorry for the whine), I can move on to the paper that attacks low-carb diets and in which we prominently figure. This article, published in the May 2000 issue of the Journal of the American College of Nutrition (free full text here), takes an ‘unbiased’ look at several different diets that were on the market at that time.  The title says it all.

Health Advantages and Disadvantages of Weight-Reducing Diets: A Computer Analysis and Critical Review

Well see just how critical a review this really was soon enough.   The Abstract lays out how the authors went about evaluating the various diets.

Design: Eight popular weight-loss diets were selected (Atkins, Protein Power, Sugar Busters, Zone, ADA Exchange, High-Fiber Fitness, Pritikin and Ornish) to be non-clinically analyzed by means of a computer to predict their relative benefits/potential harm. A summary description, menu plan and recommended snacks were developed for each diet. The nutrient composition of each diet was determined using computer software, and a Food Pyramid Score was calculated to compare diets. The Mensink, Hegsted and other formulae were applied to estimate coronary heart disease risk factors.

So, the authors were going to look at a few hand selected diets, analyze them for nutrient composition, then compare them to the Food Pyramid to rank them in terms of healthfulness. Hmmm. And they were going to use the Mensink, Hegstad and other formulae to estimate coronary heart disease risk factors. Hmmm.
Actually, they ended up using the Mensink and Katan (he of the Katanic verses post) formula to estimate the affect each of these diets would have on the cholesterol levels of anyone following them. To save you the suspense, I can tell you right now that the subtitle of this paper should be: Mensink Katan formula fails miserably at predicting cholesterol levels.
Before we look at what these authors found, let’s look at the lead in to the piece.  Again, the abstract says it all.

Background: Some weight-loss diets are nutritionally sound and consistent with recommendations for healthy eating while others are “fad” diets encouraging irrational and, sometimes, unsafe practices.

Protein Power, written by Michael R. Eades, MD, and Mary Dan Eades, MD, closely resembles the Atkins diet in nutrient composition. They identify insulin as the culprit for obesity. They believe high levels of insulin cause metabolic disturbances in the body leading to elevated blood pressure, cholesterol and triglycerides, diabetes and obesity. They suggest restricting carbohydrate intake will overcome these metabolic disturbances and alleviate medical problems. Guidelines concentrate on the amount of protein rather than fat consumed. Their book outlines methods to determine the amount of protein to consume and gives instructions for planning meals around grams of protein with restriction of carbohydrates to ≤30 grams/day. They emphasize high-fat food choices but permit limited amounts of fruits and vegetables.

Now, as you might expect, when these authors looked at all these different diets and compared them to the Food Pyramid, Protein Power didn’t fare all that well.  A finding of which I am immensely proud.  If you look at the graphic below, you can see that Protein Power was even ‘worse’ than Atkins in terms of the magnitude of its negative direction.  Atkins just won out by a nose in overall bad (as compared to the Food Pyramid) because it had just a little less ‘good’ than did Protein Power.  As far as I’m concerned, having one’s diet be far from the Food Pyramid is good, not bad.  But the authors of this paper don’t see it that way. 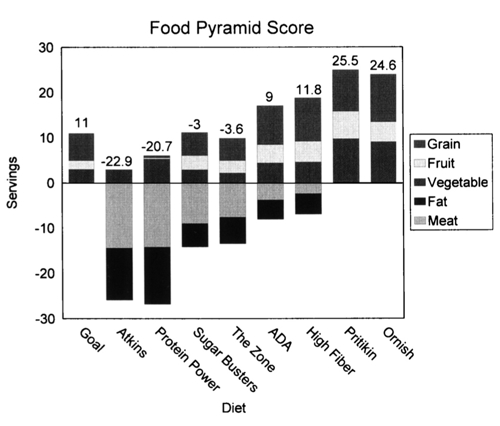 When these authors looked at saturated fat, evil incarnate in the minds of the lipophobes, they found both Atkins and Protein Power to be full of the stuff.  Especially Atkins.  And we all know that saturated fat increases cholesterol, don’t we?  Well, don’t we?  Maybe the readers of this blog don’t know that.  But the authors of this study along with fellow lipophobes Mensink and Katan know it.  The latter know it so well that they’ve created equations predicting how much dietary saturated fat will raise cholesterol.  And if we look at the graph below, we can see just how high the cholesterol levels are predicted to be in the blood of the followers of the various diets. 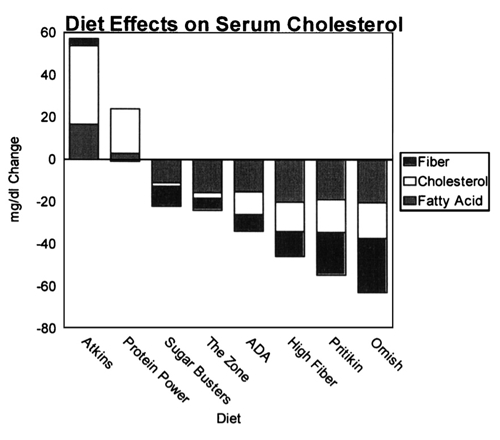 Apparently cholesterol will be way up in followers of Protein Power and off the charts in those following Atkins.  But, remember, these are just their predictions.  They aren’t reality.
Before we go on, I want you to take a look at these graphs again.  Remember, these authors are looking at popular diets and diet books.  Along with Atkins and Protein Power, they selected Sugar Busters!, The Zone, Pritikin and Ornish.  And they threw in the American Diabetic Association’s Exchange diet…and something listed on the graph as ‘High Fiber.’  What the heck is the ‘High Fiber’ diet?  All the other diets except for the ADA diet are famous and are described in best-selling books that have each sold over a million copies.  So, where did the ‘High Fiber’ diet come from?  And why is it included?
If we look in the study in the Methods section, we find that the diet is Dr. Anderson’s High-Fiber Fitness Plan.  Huh?  Who the heck is Dr. Anderson and what is his/her high-fiber fitness plan?  If we check the reference citation, we find the following:

Anderson JW?  Who could that be?  Anderson JW?  JW Anderson?  Where have I seen that name before?  Well, the author of this very article were discussing is named James W. Anderson, MD.  Hmm.  Could it be?  Let’s check Amazon.com.  Sure enough.  It’s the same guy.  And he’s weaseling his own diet book in with the lineup of diet books that are all mega bestsellers.  Interesting. And using an article in a mainstream, peer-reviewed journal to substantiate it.  Very interesting, indeed.
And what does Dr. Anderson conclude about all these diets to which he has compared his own book?

Jesus wept.
So his diet is in there with the ‘good diets,’ the high-fiber, lower-fat diets that don’t worsen the risk for progression of atherosclerosis or heart disease.  Amazing!
Let’s switch gears for a minute.  Since this paper was published in 2000 there have been numerous scientific papers showing that not only do low-carb diets bring about faster weight loss than do high-fiber, high-carb, low-fat diets, they also improve lipids better.
In 1997 MD and I licensed the Protein Power name and concept along with our own names and likenesses to a company to develop a set of tapes and workbooks to be sold on television.  At the time all this was going on, we were moving our clinic from Little Rock, Arkansas to Boulder, Colorado.  We had boxes upon boxes of patient files from our clinic in Little Rock that we brought with us and kept in storage (the law requires that doctors keep medical records for a prescribed period of time).  The company that licensed our name, etc. wanted to be able to make weight loss claims and lipid improvement claims, which it couldn’t do without substantiation.  They hired a professor of statistics from one of the colleges in Maine (the company was located in Portland, Maine) to evaluate the data from our thousands of patient files.
We told him that we checked blood on patients at the end of their first six weeks on the program and again at 12 weeks.  We also told him that since most patients had a large weight loss in the first week or two, he probably wanted to evaluate patients who stayed around longer than just a couple of weeks.  He decided that since we checked blood at the end of 12 weeks, he would evaluate charts from patients who had stuck with the program for at least that long.  He went through his statistical mumbo jumbo to determine the number of charts he would have to evaluate to get data that would be representative of our entire population of patients (or at least those who were on the program for at least 12 weeks).  Once he arrived at the number of charts needed, he came up with a way to pull these charts randomly. Once he crunched the data, here is the chart he came up with: 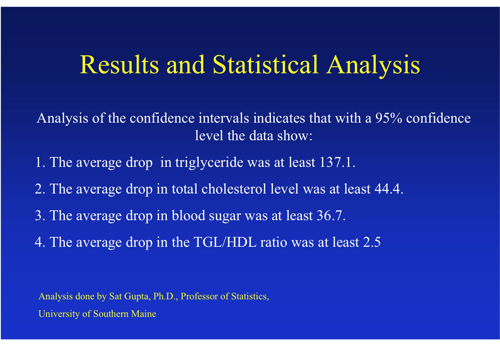 As you can see, a Protein Power diet does not raise cholesterol; it lowers it significantly.  And it drops triglycerides and improves the triglyceride to HDL ratio.  He noticed that some patients had substantial blood sugar lowering and asked about it.  I told him that the patients he had noticed were the ones who came in with elevated blood sugars to begin with.  He calculated how many charts he would need to analyze that data point and selected a number of charts of patients who had elevated blood sugars on their initial labs and who were taking no medications.  He then determined the average blood sugar lowering, which was pretty impressive.
As you can see, this data (along with the data from a number of other peer-reviewed studies) show that a lot of saturated fat (our patients were encouraged to eat saturated fat) doesn’t raise cholesterol when consumed as a part of a low-carb diet.  Which is why I said that the Anderson study discussed above should have been subtitled: Mensink and Katan equations don’t work worth a flip.
So, eat your fat, watch your carbs, and you’ll do fine.  And thanks for letting me vent.