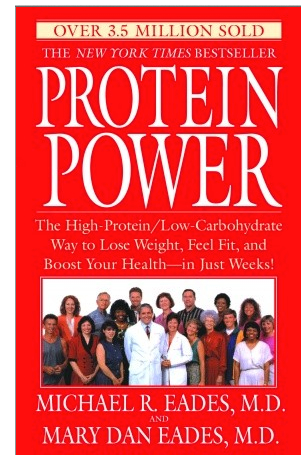 It is difficult for me to believe, but Protein Power is coming up on being 20 years old. It was written in 1995 and published in January of 1996.
There has been some talk between our agent and the publisher about a 20 year anniversary edition of the book. MD and I have decided that if we go along with this project, we don’t want to just do a new Introduction and make a few tweaks here and there. We want to do it up right and make Protein Power 2.0 (or whatever it will be called) the most up-to-date and comprehensive book on low-carb dieting available. And we want it to hold up for another 20 years.
Both of us have reread Protein Power within the past couple of weeks, and we know more or less what needs to be updated and/or amplified. Most of the book is still pretty good, but some of it gives me hives when I read it.
For example, the chapter on cholesterol. The vast majority of what I wrote in that chapter is accurate, but by reading between the lines, I can tell what my mind set was at the time. Back then I had bought into the lipid hypothesis hook, line and sinker. Consequently, the thrust of the chapter is about how a low-carb diet improves lipid values. No real mention of any benefit to saturated fat because – at that time – I believed saturated fats in excess could be problematic. This is one part of the book I guarantee will be changed.
When we wrote the book, it was in the midst of the low-fat frenzy the country is just now beginning to emerge from. At that time, there were no recent studies on low-carb diets, so we had to cobble together our data from old studies and our own clinical experience.
That has all changed now. The medical literature is awash with low-carb studies, so now we have no trouble documenting the results we were seeing clinically way back then. And we would have no trouble demonstrating that the low-carb diet is the best way to shed weight and improve health for the vast majority of people.
But we come to this from a different perspective than those who are seeking information. The two of us have a wealth of information and a combined fifty years of clinical practice in treating patients with low-carb diets. We know how to provide all kinds of answers – what we don’t know, however, is what are the questions burning in people’s minds.
Which is where readers of this blog come in.
I would love to know what you would like to see described, explained, detailed, diagramed and presented in a book about low-carb dieting.
Back when we wrote Protein Power, we had to go to great lengths to justify the scientific basis of low-carb dieting. Now, that is pretty much taken for granted. Based on the thousands of patients we had taken care of, we had a pretty good notion of what we thought people would want to read about, but we didn’t really know. We must have hit the mark fairly closely, though, because the book has sold over 4 million copies.
But now we have the internet and blogs such as this one. A unique situation exists allowing authors to actually query potential readers before writing a book.
So, we would like to crowdsource Protein Power 2.0. Please tell us in the comments section below what you would like to see in an updated version. What would make the book work for you? And don’t hold back. The more commentary, the merrier we’ll be.
Our goal is to make the new Protein Power a user-friendly guide for those coming to low-carb dieting for the first time as well as to those who, like us, have done it for years.
Whatever questions, comments, complaints, requests you have, let us know. Don’t be shy.
Once we’ve gathered and sorted, I’ll tabulate and put up in a post. If there ends up being too much to put in a single book, I may figure out how to use Survey Monkey or one of the other such pieces of software so folks can vote for what they think needs to make the cut.
When all the dust settles, I’ll put up a table of contents reflecting the proposed new outline of the book.
MD and I both will be very appreciative of any help and advice you can give us on this. We’re writing the book for you.
Thanks very much.