Share0
Tweet0
Share0
Started off the day with a Vanilla shake with just a touch of caramel syrup in it.
Didn’t eat lunch until early afternoon.  MD and I went to the Habit, which is a well-trafficked Santa Barbara hamburger/sandwich chain.  It was a chilly damp day today in SB, but we ordered at the window and ate outside.  MD whined about the cold, but she manned up and ate outdoors with me. 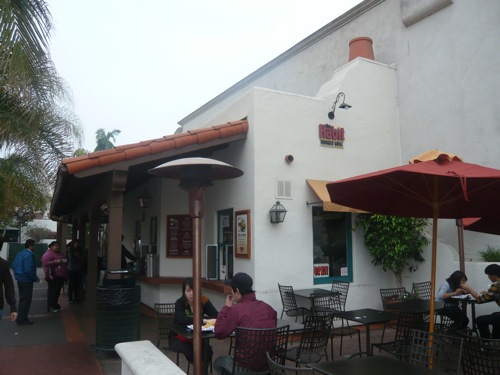 Note the line to the left of the soft drink machine.  More about which later.
Here is the menu.  Pretty simple but inexpensive and very good.

Here is my Tri-Tip sandwich up close and personal. (Tri-tip is a Santa Barbara special cut of beef.  I’ve never seen it anywhere else, but every place here has a tri-tip sandwich.)

I told you it was good.  Plus I had the BBQ Bacon Char as did MD.

We both finished our sandwiches and ate all the little peperoncini in the cup in the 2nd photo above.
We had soda water (or seltzer) for our drink.  I don’t know how many of you know this, but you can get soda water out of most soft-drink self-serve vending machines.  There is a little button that is sometimes in the back, but more often in the front of all the dispensing levers.  All you have to do is put your cup under the spout and push the little button and you get non-caloric, fizzy soda instead of HFCS- or aspartame-containing soft drinks.  Here is MD dispensing.

Here is the little button up close:

As MD and I ate and watched the other diners, I noticed a pattern.  People would come to the window, order their meal, and get their drink cup and a numbered ticket.  They went immediately to the soft drink dispenser and filled their cup.  I watched at least 20 people, and ALL of them got the HFCS-sweetened drinks.  I didn’t see a single diet drink customer.  These folks would all slurp on their drinks while awaiting their orders.  Once their orders were called, they walked to the counter, picked up their food, walked by the soft drink dispenser and refilled or topped off their drinks.  Then they sat down and ate.  After they ate, they disposed of their trash (we’re a clean lot here in Santa Barbara) and walked by the soda machine for one last refill before they walked away.  Each of the regular cups holds what looks to be about 16 ounces, but with ice, probably holds , say, 12 ounces.  Each 12 ounce soda contains about 40 gm of high-fructose corn syrup.  Multiply that by 3 (or at least 2.5) and that gives you how much HFCS each of these people consumed during their lunch.
Late in the afternoon, I scarfed into a bag of mixed nuts and threw back TWO handfuls of the following size.

For supper, MD made chili.  No beans.  Just meat, peppers, mushrooms, tomatoes and whatever she uses to make the chili sauce that holds it all together.

I had this bowl and the rest in the skillet, which was probably about 3/4 this much.  We had diet tonic to drink.

If you can believe it, we still have this stuff left from when we bought it early last week.  I’ve got to admit that despite how much I love it, I’m beginning to get a little tired of it.  MD tells me that there is enough for one more go round.  Then, thank God, it will be gone.
I’m going to go ahead and post this now.  If I eat a snack tonight or drink anything other than a non-caloric beverage, I’ll put it up at the head of the list on tomorrow’s digital diet diary post.